Ferry Service was integral to Nyack transportation in the past.
Do ferries have a place in Nyack’s future?

by Max Cea and Dave Zornow 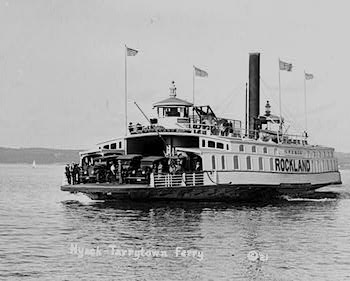 1921 photo of “The Rockland” ferry as it is leaving Nyack for the Tarrytown. In 1874 the ‘Tappan Zee,’ a steam ferryboat, began operations with Captain John Lyon at the helm. He later took over the ‘Rockland,’ piloting her between Nyack and Tarrytown until his death in 1923. Use of the ferry diminished with the opening of the George Washington Bridge in 1931.
Photo Credit: Library of Congress.

Before the New NY Bridge and the Tappan Zee Bridge, before even the George Washington Bridge and the Bear Mountain Bridge, Nyack residents traveled across the Hudson River to Tarrytown and New York City via ferry.
Regular ferry service to Nyack began more than 180 years ago. The first chartered service was established in 1839 with a 16-ton sailboat that ran from 5a-9p each day, April through December. Ferry service continued for over a century, until early 1941, when the Ferries Operating Company, Inc. discontinued its Nyack-Tarrytown ferry run. (Early 20th century Nyack was a Millenial’s dream town; there was also regular train service West of the Hudson to Jersey City until the 1960s.)
It’s easy to blame the demise of the ferry business on the rise of the automobile, but it wasn’t exactly cars that killed ferries. Actually, to the contrary, cars initially stimulated ferry service, especially at upstate crossings, according to the Encyclopedia of New York State. Rather, it was bridge building that doomed regular Hudson River ferry service: the opening of the the Bear Mountain Bridge, in 1924, and George Washington Bridge, in 1931. 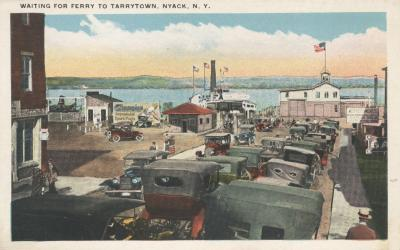 1930 postcard, “Waiting for Ferry to Tarrytown [in] Nyack, NY” At the foot of Main Street in Nyack, cars emerge from the ferry at the dock, while two rows of automobiles wait to roll onto the Tarrytown-bound boat. A billboard on the left advertises “Champion Dependable Spark Plugs.’ On the right are signs proclaiming “Refreshments – Ice Cream Parlor – Gas.” Source: hrvh.org

Ferries across the Hudson had a brief revival, both on the actual water and in the community dialogue, in the 1990s. Nyack’s Joseph Mitlof  started Tappan Zee Water Taxi and Tours shuttling people between Nyack and Tarrytown. His brief success ended abruptly on August 25, 1998 when a 21 passenger boat owned by Mitloff overturned, sending its 28 passengers into the Hudson River. While most were able to make it back to shore safely, Milt Salkind, an 86 year old Nyack resident, died as a result of the incident. In addition to the boat being seven passengers over its limit, the Coast Guard said the boat lacked a proper permit. Although the accident ended Mitlof’s ferry business, you can still find it a dotted line marking its route between Nyack and Tarrytown on Google Maps.

Do you ride the Tappan Zee Express (TZx) to catch a Metro North train in Tarrytown or White Plains? Your routine ride to the railroad is about to get rocked. 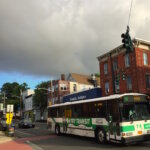 The Lower Hudson Transit Link (LHTL) will open when the new Tappan Zee Bridge opens, running along the I-287 corridor between Suffern and White Plains. Features of the new system include new bus stations with pre-boarding fare collection; state-of-the-art buses with WiFi; smart traffic signals that adapt to traffic conditions in real time.

In the mid-1990s the MTA proposed a more ambitious ferry revival in Nyack. The plan included a 500 car parking lot on the property just north of the Claremont Condominiums at the foot of Main Street. The proposal was nixed though because of the impassioned dissent of a large anti-ferry coalition of residents, business owners, and elected officials. “The concerns at that time were increased traffic through the village. People didn’t like that the thruway or MTA would own the parking garage, and would become a major property owner in the village,” says Nyack Mayor Jen Laird-White. “Those were legitimate concerns then — as they still are today. The community felt like the ferry was being shoved down their throats.”
Now, despite a new bridge being erected across the Hudson, commutation from Nyack to New York City is as big of a problem as ever, and ferries are again being brought up as a possible solution. Last winter, a team of Columbia University graduate students studied the prospect of a new ferry service linking Nyack to Tarrytown or New York City. In Part II of this series next Wednesday, we delve into the details of the Columbia students’ plan and explain what such a ferry service would look like.

Ferry Across The Hudson: An Old Idea That’s New, Again

This article is the first installment in a three part series about bring a ferry service back to Nyack. Here are links to all three articles:

Special thanks to Dr. Floyd Lapp, FAICP and the team of Columbia University graduate students who prepared this study: Yixiao Fang, James Gerken, Hyun Seung Lee, Patrick Li, Lia Soorenian, Taylor Young and T.A. Andrea Forsberg.
Here are links to the complete study. Please note that these pdfs are quite large and are best viewed on a desktop or a tablet over WiFi (not cellular) connections.