by Max Cea and Dave Zornow

Fans Of The Ferry Petition Drive

Shortly after this series concluded on Nov 1, an online petition was started to show support for the Nyack Ferry revival. It was quickly followed by the launch of NyackNeedsAFerry.com, a one stop shop for ferry fans. The petition, which asks New York Governor Andrew Cuomo to push the MTA to go All In on the Nyack ferry initiative, garnered over 180 signatures in its first 24 hours.

The Village of Nyack collaborated with a team of Columbia University graduate students in 2015 to examine the feasibility of creating a Nyack/Tarrytown and Nyack/New York City ferry service. Last week we looked at the long history of ferries in our region. In this installment, we’ll look at some of the students’ conclusions regarding potential ridership, parking and traffic implications, trip lengths and fare structures for a 21st century revival of a centuries-old means to get across the river and down to Manhattan.

In public transportation terms, catchment area is the distance away from the given mode of transportation that the service will be able to sustain its ridership. It can expand or contract depending on how appealing the form of public transportation. The catchment area for the TZ Express bus, for instance, is going to be pretty small, because people won’t go far to catch a bus. So the catchment area is a combination of existing ridership plus the appeal of the form of transit you’re offering.
The Nyack to Midtown, Manhattan ferry was projected to attract riders from as far as 20 minutes away, hence greater ridership. The Nyack to Tarrytown ferry is projected to attract riders from 10 minutes away.
There are, however, ways to expand the catchment area. “One possibility of expanding the catchment area — if that was desirable — would be a hybrid trolley that would run North/South from Hook Mountain to Sneeden’s Landing. It’s a possible future idea — but it’s not part of this study,” said Nyack Mayor Jen Laird-White. “ 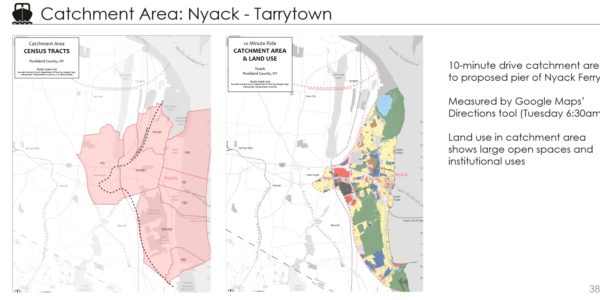 One ferry scenario looked at turning Exit 10 into a Bus Rapid Transit ferry hub with a 1,000 car parking structure, a BRT line going east-west, a dock for a ferry at the base of the new bridge. It was easy access from on and off the thruway. That created a much bigger catchment area because conceivably if you could leave Saddle River, NJ, jump onto the thruway, go into a garage, and be onto your commuter option 40 minutes to Midtown, suddenly that makes any other option in Saddle River conceivably more attractive.”

When a Ferry Would Run

Under both commutation options, the ferry would probably run every 30 minutes, staggered, and in three hour periods in the morning and evening.
Ferries run year-round and only have down days due to the most inclement conditions. They’ll run them with ice cutters up to a point.

Ferries are a mixed blessing when considering their environmental impact.
On the one hand, they create wake patterns that could result in erosion and the disturbance of sediment; they require dredging, a process that releases toxic chemicals and heavy metals into the water, and which disturbs the environment by changing the topography of the bottom of the ocean from accumulated spoil; and because ferries typically run on diesel fuel, they have high greenhouse gas (GHG) emission rates compared to other modes of public transportation.
But those shortcomings are mitigated if a ferry service can help take cars off the road, which would reduce overall greenhouse gas emissions. “We live in a climate change world, something that most reasonable people accept as true,” said Nyack Mayor Jen Laird-White. “We can’t drive everywhere. We need to reduce our substantial dependence on fossil fuels.” Laird-White pointed to a hybrid water taxi currently under development in Norway, and said that Nyack would be a great candidate to be the first community in the U.S. to implement a hybrid ferry.

Both the Columbia students’ study and a previous BFJ Planning report suggest there is ample parking available to support a ferry service by simply improving the Nyack Marina parking lot.
“You could repaint, add more parking; there’s things you could do to add more parking,” said Laird-White.  She noted that both the Columbia students and BFJ Planning see possibilities in building a low-visual impact garage that makes use of the slope in the existing parking lot. “By extending the upper portion of the marina parking lot from the base of the church on Piermont Ave, you could create a parking terrace, where you won’t disrupt any views of the river. If you put some care into it, you could improve the views by adding some landscaping and making it more than a stretch of pavement. If you find that you need more parking, you could add another level by digging into the ground.”

With this approach you wouldn’t be taking away any green space. “You’d just be taking currently paved space, capping it with another layer of  paved space and landscaping it,” she said.

Show me the money.

Jen Laird-White says this ferry would only be affordable for consumers if there was a subsidy from the MTA. “I’m sure whoever the ferry operator is would build the ferry infrastructure,” she said. “I think the parking terrace would be funded — there are many ways: lots of grants, you could probably get a CFA grant; there’s a brand new restaurateur looking, where it could be a public-private investment project. At $4 million, which was the price tag for the biggest expansion of parking, that’s a very reasonable cost.”

Ferry Across The Hudson: An Old Idea That’s New, Again

This article is the second installment in a three part series about bring a ferry service back to Nyack. Here are links to all three articles: 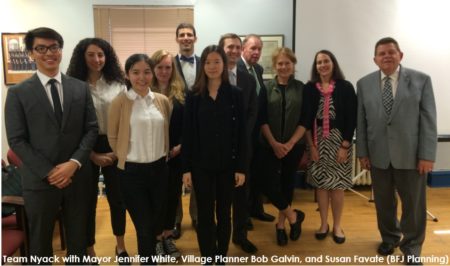 We analyzed the potential ferry users in the Nyack catchment area defined as a 10-15 minute car ride to the Nyack pier for trips to Tarrytown as well as the 39th street pier in Manhattan. Based on time/cost considerations, the ferry was the best transit mode to both locations. However, trips to Lower Manhattan are not feasible at this time.
The most challenging and intriguing aspect of this project was to identify space near the potential ferry pier at the Nyack waterfront to fit parking ,especially since there are two restaurant/catering facilities at this location. We found the we could site a parking terrace into the slope of land that rises west from the waterfront, less obtrusive than a parking structure, with the commensurate parking spaces.
Led by Mayor White and their consultant at BFJ Planning, we explored the weekend potential for excursions from the 39th street ferry pier using Nyack as the gateway to the lower Hudson Valley and the tourism potential. If successful, this project will provide multi-purpose results-journey to work access on weekdays and recreational activities on the weekends which could also stimulate the local economy. Unlike MTA subsidized ferry services between Haverstraw-Ossining and Newburgh-Beacon, which only provides journey to work access to Metro North, this ferry service could also provide access to New York City, and the major growth of jobs existing and prospective at the far west side, but also stimulate reverse recreational weekend trips. — Dr. Floyd Lapp, FAICP

Here are links to the complete study. Please note that these pdfs are quite large and are best viewed on a desktop or a tablet over WiFi (not cellular) connections.