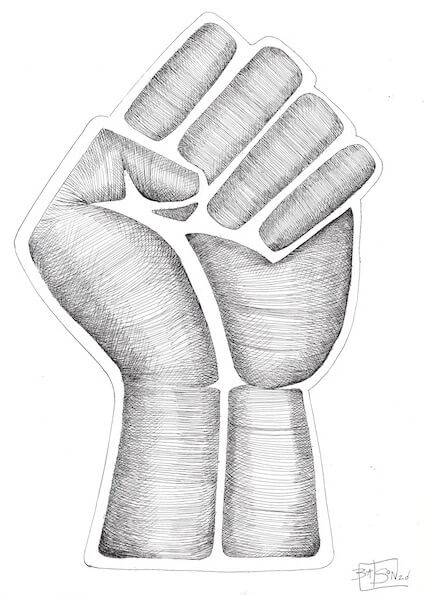 In Nyack, Main Street is emblazoned with the colors of the African American flag and the proclamation, Black Lives Matter. The officially sanctioned piece of street art is a larger-than-life caption for the daily demonstrations that have been taking place in Veteran’s Park since the May 25th murder of George Floyd by a uniformed officer of the Minneapolis Police Department.

The instantly iconic public art work emerged on the morning of Juneteenth, the anniversary of the abolition of American slavery in 1863, which is now a legally observed holiday in Nyack, and a growing number of cities and companies across the country. A cadre of activists, artists and impassioned citizens, of all ages and races, pushed rollers dipped in protest colors, spelling out the assertion of humanity: Black Lives Matter. 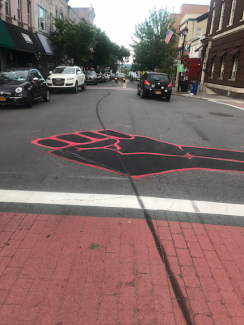 While many cars that passed the protest site honk their horns in support, on Saturday, a biker deliberately burned rubber across the block long protest symbol, according to witnesses. Within minutes, residents flocked to the scene to show solidarity with the protest message. By Saturday evening, evidence of the vandalism was erased with a fresh coat of paint.

Dozens of cities now host similar protest messages, some visible by satellite, transforming Main Streets into anti-police brutality banners. A spirit of activism and art are converging in Nyack and across the country, creating a Black Lives Matter culture. Here are some of the musicians, filmmakers and visual artists, some familiar, some anonymous, who are giving this movement the legs and heart to endure until meaningful reforms are secured. 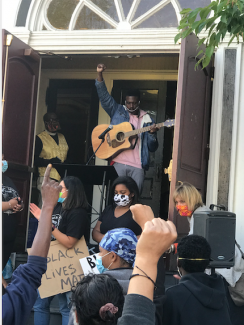 Over one thousand people gathered on South Broadway on June 1, for a march in memory George Floyd organized by the Nyack Center Teen Council. As the biggest crowd most had ever seen in the village, an uncertain mood hung in the air when Nev Cadesca took the top-stair stage. His plaintive delivery and the heartfelt plea in his lyric released the tension everyone felt as tears.  7Tre Records just released the song he sang, his second single called “POLICE”. Click here to listen. 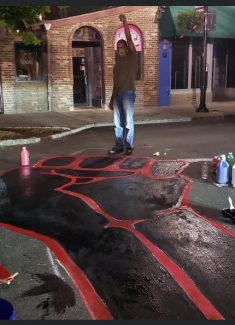 A Cadre of Creatives

A cadre of creatives organized by Kris Burns, have been converting the political intentions of protest leader Nikki Hines and the Nyack Center Teen Council into potent cultural and communication tools. Art supplies on-site in Veteran’s Park allow visitors to create their own posters. Images of movement martyrs, including trans victims, form an outdoor gallery. The daily protests in Nyack has a constantly evolving back drop. But the vision of a Black Lives Matter mural carpeting Main Street required a midnight, Amish barn-raising style effort, aided by the large-scale expertise of Kris Campbell and the deft-hand of Dan White. 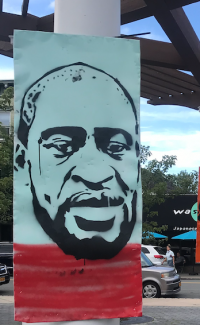 Andy Minniefield, the anchor protestor,  is not the only sentinel that looks over the protest assembled in Nyack’s veterans’ park. Since a one week in, seven likenesses of George Floyd appeared in the gazebo. The spray paint on metal heads take on the gravitas of totems.  There is no signature, just the iconography of a seven likenesses of George Floyd, frozen in time, as a undying witness to the nation wide upheaval caused by his own murder. 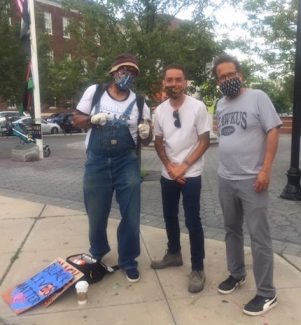 Filmmaker Brooklyn Demme has spent more time in Veteran’s park holding a protest sign than a camera. My Black Nyack emerged from the stories of African Americans standing in the center of the village and sharing their experience with systemic racism in the Hudson Valley. I am producing the 15 minute film and Antony Geathers is the Director of Photography. This will be Brooklyn’s second film, after his directorial debut, “The Place Where People Gather,” chronicles the Ramapough-Lenape Nation’s struggle to gather and pray on their ancestral lands. 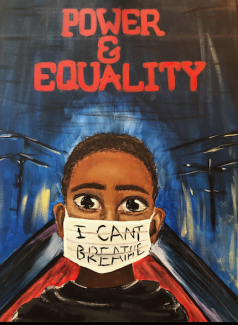 This painting was a Father’s Day gift from a daughter supported in her activism. It is a portrait of vulnerability and innocence forced to fear suffocation. The work is by Cecilia Weiss, a junior at Nyack High School, and a 17-year old activist who is passionate about a number of social issues, including racial equality and ending institutional racism. 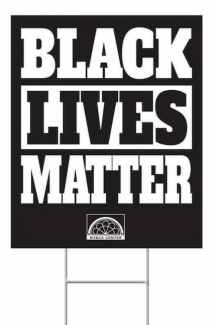 From Main Street to your street. Join Nyack Center and Harrington Press in spreading this message and supporting the young people who launched this local movement. Funds from the purchase of every sign will go to the Nyack Center’s Teen Council. Click here to order a sign.

In just one month, the Teen Council has been the catalyst for the largest march in memory in Nyack, the Black Lives Matter mural on Main Street and the 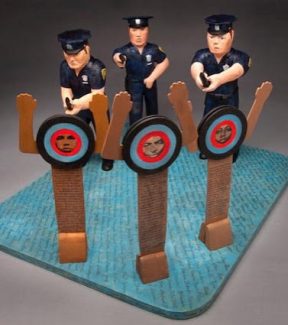 Village of Nyack’s decision to embrace the street mural and make Juneteenth a legal holiday in Nyack. Wonder what they’ll do next month Stay tuned.

Ruth Geneslaw began work on this piece in 2015, after the shooting of Michael Brown in Ferguson, MO. The six black victims, who include Brown, Walter Scott, Timothy Russell, Rumain Brisbon, Tony Terrell Robinson, Jr. and Charly Keunang, are depicted as targets with the police guns aimed at them.