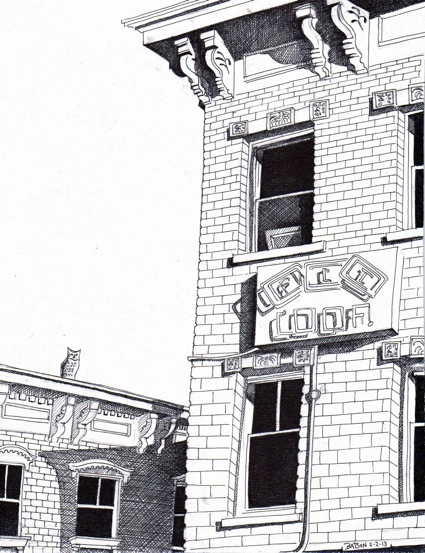 Every time I passed this sign, I struggled to decipher the mysterious acronym. Not knowing the meaning of the hieroglyphic written in glass neon tubing gnawed at me.  And when I finally obtained the answer, I was launched on another voyage of discovery.  What on earth was the Independent Order of Odd Fellows and what did they do inside this building at the corner of Franklin and Main Streets?

This three-story brick structure was erected in 1895 as the local lodge for the international fraternal organization. The etymology of the name is more mundane than the evocative word “odd” promises.  Fraternal orders were originally organized around a particular trade, like the Freemasons who were drawn from Masons. Odd Fellows drew their members from various or “odd” trades.

Support for the veracity of the boast comes from Kjeld Tideman, a painter who had a studio in the building in the 1980s and 90s. Kjeld (pronounced Shell) had a childhood memory of seeing an I.O.O.F sign in Oslo, the capital city of his native Norway. When he was setting up his painting studio, he found daguerreotypes among artifacts left behind by the group that gave the appearance that the entire white male population of Nyack belonged to the Odd Fellows.

Several facts about the Odd Fellows distinguish the group from other fraternal organizations. They were the first to accept both men and women in their ranks, and they were the first to build homes for orphans and the elderly. Illustrious past members include Ulysses S. Grant, Wyatt Earp and Charlie Chaplin, an assortment of fellows that some might find odd. 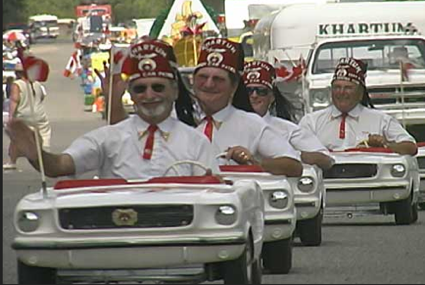 But with theatrical garments, resplendent with elaborately mono-graphed cloaks, upside- down-ice-bucket-shaped-hats, and matching collars and cuffs, the Odd Fellows are very similar to their sibling service clubs.  However, they had nothing to compete with the off-beat practice of the Shriners to appear at public events in miniature cars. I guess if you fund children’s hospitals, you amass the social equity to parade around in whatever strikes your fancy.

The man who solved the riddle of the defunct neon Odd Fellow’s sign for me was Philip Biagioli.  A transplant to Nyack from the Bronx, Biagioli, used to pass a similar display near the Whitestone Bridge. Biagioli, who worked as coordinator of media services for Rockland Community College is the local champion of a national movement to preserve ghost signs, the vanishing commercial messages that are decaying in plain sight in cities across America. 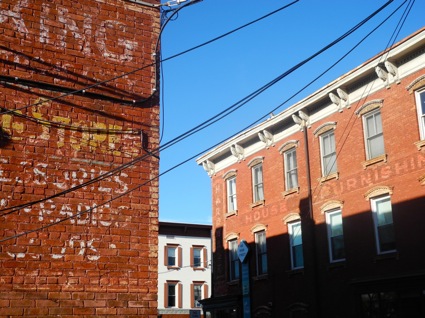 In his campaign to save the numerous ghost signs in Nyack, like Havermales Hardware’s fading advertisement that is across from the I.O.O.F sign, Biagoli hopes to enlist the support of Frank Jump. Jump is the author of the book Ghost Signs of New York and publisher of the Fading Ad Blog.   In an interview with the New York Times, Jump explained. “The sense of urgency I felt every day drove me to document New York’s fading advertisements, and capture the marks left by artists and artisans, most long since dead, who spent their lives painting huge commercial murals over the last 150 years.

As bland, crassly commercial and irrelevant as a sign that lists the items available for purchase at a hardware store that closed decades ago may be, there is something unnerving about a landscape that is constantly in flux.  Freezing the process of public entropy of these signs creates monuments of local archeology that connect the multiple generations that have shared and shaped our village.

There are some philosophical differences among preservationists on this matter.  One camp would like to restore these fading ads to their original mint condition. Others, including Jump, are more ambivalent. In the same New York Times interview Jump said, “Personally, I feel these ads should be left alone to fade into imperceptibility, which is part of their natural life cycle. Although I understand the motivation behind recreating these images to remind us of their former glory, for me, the fading quality of these images is a beautiful process to behold.” 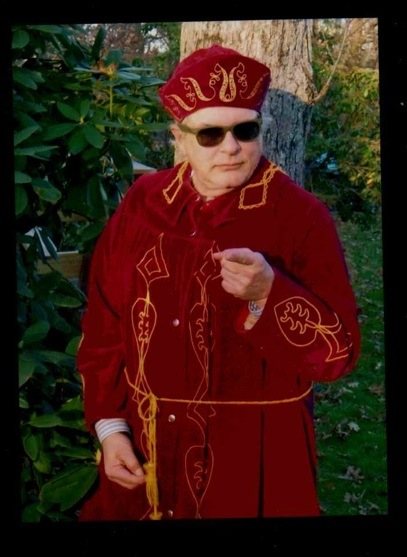 However, Biagioli would like to see the power restored to Odd Fellows sign. His affinity with the group was on display in his recent Christmas card, where he donned the fraternal order’s ceremonial garb.

The tubes that once carried illuminated neon gas in the service of spreading the Odd Fellow message have survived intact. This restoration project should not offend the purists:  It doesn’t need new paint, just a visit by an electrician and the flick of a switch, and voila, the gateway to our downtown business district would have a distinctive historically significant beacon. And as a landmark, Nyack can be proud of the sentiment behind the motto emblazoned on the Odd Fellow’s antique electric billboard, represented by the letters F.L.T: Friendship, Love and Truth.