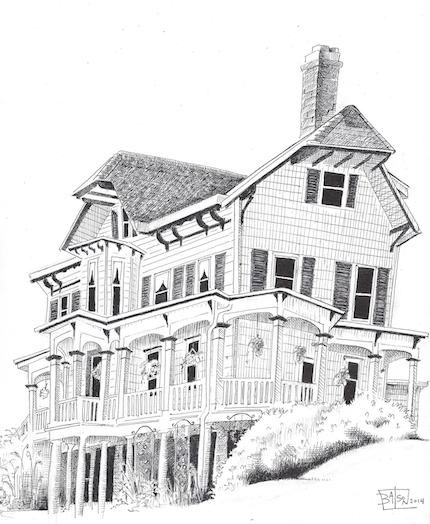 Imagine the stories that would be told if houses wrote autobiographies.

This stately structure on South Highland Avenue could tell us if slaves were hidden here during the abolition movement. We would know about the political maneuverings and legal strategies of the successive generations of lawyers who called this place home. Or learn the downside of having a neighbor who owns a private zoo. The garden could share the secrets of what makes her bloom. But alas, buildings and garden beds don’t write books.

Fortunately for us, this house has a biographer, and her name is Judy Martin. 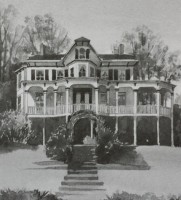 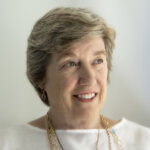 Judy has served Grace Church as treasurer and vestryman; the village as the manager of the Housing Authority, and is currently a dedicated volunteer at Grace’s Thrift Shop. She and her husband, Mac moved into the Towt house in 1967.

If someone wanted to create a biography of their house, where would they start?

I think you start with the land; its earliest ownership records, and historical maps. I went to the county clerk’s office and researched the deeds as far as I could go. Deeds follow the actual ownership of the land and show changes, liens and court records.

If it’s a recent building, then the municipal building department has pertinent records. And once you have the deeds, then you can check the names to see who those people were.

The earliest owner that you documented was John Towt, who helped establish St. Philip’s AME Zion Church in Nyack. Towt was rumored to have been active in the Underground Railroad. Did you find any evidence of cavities in the home where escaping slaves could have hidden?

There were several places to hide a runaway slave in the old house, and there may have been more that were lost when spaces were taken for the indoor plumbing installation.

On the 4th floor there was a floor-to-ceiling wardrobe and a walk-in cedar closet. On the 3rd floor there was a three-part bay window seat that opened, and a hallway between rooms with doors opening out on each side.

Connecting the 2nd floor and the bottom floor kitchen there was a dumbwaiter, controlled entirely by ropes and pulleys inside the shaft, and located right next to an exit door on the second floor.  And on the bottom floor there was a closet/exit door leading to the coal bin and a highly unusual small window leading from the underground root/fruit cellar to the space under the porch.

If it were my choice, I’d have chosen only the 2nd or 1st floor spaces, since all of them were within inches of the outside if a dash to escape were needed.

Have you ever seen a picture of John Towt?

I’ve never seen a picture of John Towt; and I’m not sure there is one.  But when we worked on the master bedroom, we found a picture that had fallen down behind that fireplace mantel.  It was labeled “first trousers.”  It turned out to be Louis Leland Robbins, Jr.,  one of John Towt’s grandsons. 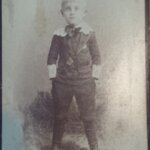 Who are some of the other families that have lived under this roof?

As is seen in the 1870 census, Elizabeth was the eldest child of John W. Towt (1803-1891) and Susan Towt.  The Towt land is delineated on the 1876 Atlas of Rockland County, showing two residential homes.  The parcel extended all the way to what is now Route 303 and included Buttermilk Falls. 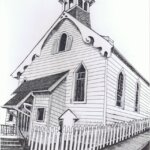 In 1821, as a 19 year old, John Towt was exposed to the cruel perversion of slavery while traveling through the American south. Towt settled in Nyack in 1855 after a successful career in New York City where he amassed a fortune.

Towt would help establish St. Philip’s, an African Methodist Episcopal Zion Church that is still located at the corner of North Mill and Burd Street. The A.M.E. Zion Church was founded in New York in 1796.  From its inception the church was an active participant in the Underground Railroad and counted Harriet Tubman, Frederick Douglass, and Sojourner Truth as members.

Although Towt played many roles in the congregation in Nyack, including superintendent of the Sunday School, the day to day operation and religious activities of the church were led by pastors of African descent.

According to Dr. F.B. Green’s contemporaneous history of Rockland County written in 1886, “Towt was called upon to lend personal assistance to a fugitive negro. On that occasion, he concealed the runaway in his house, until he was able to travel further, and then saw him safely off, on his way to freedom.”

The 1876 Atlas of Rockland County shows that Towt owned a parcel of  land to the south of where the Nyack Brook meets the Hudson River. Nyack is widely considered to have been the mid-point between Underground Railroad locations in Jersey City, NJ and Newburgh, NY. The Nyack Brook is thought to have been a navigation landmark leading escaping slaves to the Hudson, a natural conduit to Canada.

Towt’s neighboring land owner was Cynthia Hesdra. An African American, Hesdra (1808-1879) was enslaved at one point, yet died a wealthy woman, accumulating  properties and businesses in New York City and Nyack.

One of the homes is identified on that map as the residence of M. M. Dickinson.  Although the Dickinson family later owned the land north of the Towt land, and, in fact, sold a piece of it to Elizabeth in 1892, the Dickinson referred to here is Marcena Menson Dickinson, (1823-1890) who served as Orangetown Supervisor in 1856 and 1857, and two terms as Rockland County District Attorney, 1862-1868 and 1875-1878.

The land where the Nyack Middle School now stands was once owned by Pierre Bernard and operated as an Ashram called the Clarkstown Country Club. Apparently some of the guests in his menagerie made an impromptu house call once?

From 1942 – 1949, this home was owned and occupied by John and Anna Fruauf, and their daughter Doris Fruauf Rose. Their granddaughter, Tracey Rose Cummings, remembers that one afternoon, the monkeys belonging to Oom the Omnipotent (next door to the south) got loose, came down the hill, climbed the rose trellis and went into Doris’ third floor bedroom.

What drew you to this house?

We grew up outside Buffalo, NY, and wanted to live in a small community, not just a commuters’ suburb. When we walked on Main Street in Nyack, people we did not know greeted us, just as in our upstate village.

The first time we saw the house was on a foggy evening. We put in an offer and it was accepted, without ever knowing the house had a 12 month Hudson River view.  The house was one of a kind, which appealed to us, and finally, we could afford it.  It had 12 rooms, and every one of those and every inch outside needed help!

Today it would be called a handyman’s special. But we were young, energetic, and willing to learn whether the paste went on the wall or on the wallpaper!

What’s your favorite room in the house?

I love to cook and I love to eat, so of course, the kitchen is my favorite place, but for a quiet time with a good book, the house has lots of cozy corners and window seats and bay windows, and if it’s a really good thunder and lightning storm, you’ll find us outside on the porch, loving it!

It seems that you put as much effort into the grounds as you do the building. What is your favorite feature in your garden?

Up by the house, the hydrangeas, azaleas and rhododendrons create lovely living walls against which annuals smile at the house.  And we are continually planting forsythia to create anti-deer fencing, and fruit trees to replace the tall maples as they topple.

But the private place is the terrace – totally surrounded by green, and supporting perennials changing with the seasons.

Special thanks to Myra Starr