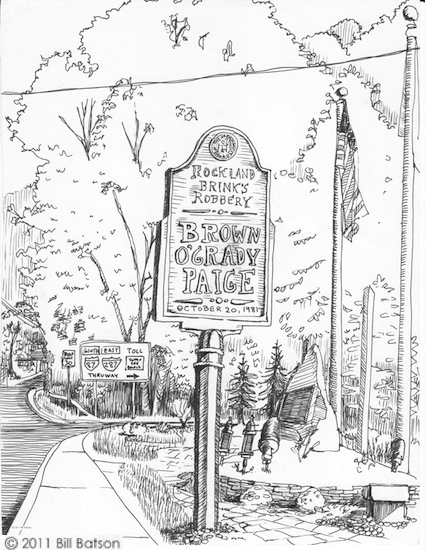 Shared events define a community. The event has to be so overwhelming in its substance and scope that it becomes a link between strangers. In the years following a shared event, like an assassination, everyone remembers where they were when it happened.

For the Rockland County community, the Brink’s Robbery rises to that historic standard. On October 20, 1981, members of the Black Liberation Army robbed a Brink’s truck at the Nanuet Mall. After shooting two guards, one fatally, the robbers ambushed and killed two Nyack police officers while attempting to escape over the Tappan Zee Bridge. The memory of Officers Waverly “Chipper” Brown and Edward O’Grady and Brink’s guard Peter Paige will be honored this Wednesday on the 40th anniversary of the robbery.

When a shared event impacts a large community like a nation, the figures involved are distant; they become blurry caricatures. Americans knew Kennedy as the president with movie star good looks and Lee Harvey Oswald as the villain straight from central casting. Unlike a televised drama that you can turn off, the residents of Nyack had a front row seat to the Brink’s tragedy. Brown and O’Grady were not remote figures, but local beat cops. Their violent deaths rocked the tranquility of the village.

As a black family that has roots in Nyack going back to the 19th century, the loss of Waverly Brown was very hard on us. Brown became the first African American on the Nyack Police force in 1966. He was a symbol of equality for his contemporaries and a role model for their children. That a group that purported to be fighting on behalf of African Americans caused his death is the kind of circumstance that the word irony is almost inadequate to describe.

My aunt was the deputy village clerk at the time of the robbery. Kathy Boudin, who was later convicted of felony murder, was handcuffed to the bench in the hallway outside her office. My aunt was anxious about going to work at the Nyack Village Hall the day after Boudin’s arrest because she feared further violence. Her concerns were justified. Cognizant of the fact that the Black Liberation Army had attempted jail breaks in the past, snipers stood as sentinels on roofs of buildings along Broadway and Main Street. In October 1981, Nyack had all the hallmarks of a community under siege.

When the shooting occurred, I was in Brooklyn studying art at Pratt Institute. I called home to make sure that everyone was OK. I remember my father being very sad and edgy. Our home was walking distance from the scene of the crime. If my family had been home at the time of the shooting, they would have heard the sound of automatic gunfire. Over the past year, we’ve had eerie reminders of that tragic day on two occasions when police scoured the backyards in our neighborhood looking for suspects fleeing robbery attempts at the bank on the corner of Kilby Street and Route 59.

Several years after the Brink’s Robbery, I became close with a childhood friend of Boudin. They had both been very active politically in the 60’s before taking divergent paths. My friend became an advocate and organizer and Boudin went underground. In 1968 many activists believed that the U.S. government would eventually collapse from the mass demonstrations and riots that were sweeping the country. My friend actually bet her mother that there wouldn’t be federal elections after 1968. Her mother collected on that $100 bet. Boudin, being alienated from reality by years of living in hiding, could not accept that the government had prevailed in the counter culture wars. Just like the Japanese soldiers marooned on Pacific Islands for decades after World War II, Boudin and her fellow revolutionaries did not know that their movement had lost or that they were fighting for no one but themselves.

The mood of discontent and tumult that hovered over our nation during the 1960’s had drained away by the afternoon of October 20, 1981. The Vietnam War was over, a stubborn truce had held between racial antagonists and an era of upheaval gave way to a period of relative calm. The storm of violence on that day fell with no warning from a clear blue sky. But instead of a whole nation being deluged, the full downpour of despair fell only on the Village of Nyack.

Workers were grooming the shrubs and adding mulch to the garden beds when I arrived to make this sketch of the Brink’s Robbery Memorial in mid-October 2011. This wasn’t a last minute campaign to prepare the hallowed ground for public scrutiny in advance of the anniversary — each time I see this shrine I admire how well it is maintained. I look at the memorial every time I pass through the intersection and am sure that many others do the same. The Village of Nyack, the Town of Clarkstown and the Patrolmen’s Benevolent Association and all those known and unknown who care for this sacred spot should be commended.

A stone bench and path frame the memorial at the intersection of Route 59 and Mountainview Road, where a memorial event will take place tomorrow. The center piece garden, which has been routinely replanted by an anonymous party for years, has a large stone with a plaque on the site where the officers fell, and two eternal flames to keep perpetual vigil. As I sat and drew I was moved by how many motorists nodded and waved acknowledging my presence. I believe they knew why I was there and my act of remembrance created a connection. As terrible as the crime was that precipitated the construction of the memorial, it was a shared event that connects us as the form of family we call community.