Last Thursday, June 3, I was honored to be inducted into the Rockland County Civil Rights Hall of Fame. Congratulations to the other honorees, Gail Golden, Michael Greco, Martin Langer and Rabia and Dr. Paul Nagin.

I accepted the recognition in the name of my grandmother, and local civic leader, Frances Lillian Avery Batson. Here are my remarks. I have also reposted a column I wrote about my grandmother entitled, Grandmother’s Chair. 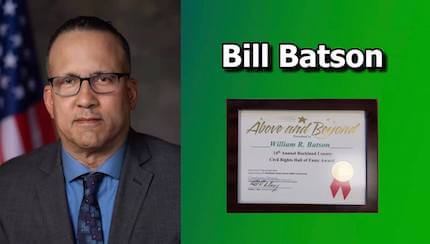 In 1959, my grandmother, Frances Lillian Avery Batson, spoke out against Urban Renewal.

Her words are captured in Carl Nordstrom’s book Nyack in Black and White.

At a public meeting on Nyack’s Urban Renewal project, she pointed out a problem with the relocation plan for displaced black families.

“If people who have homes to sell in various parts of the county and township are not willing to open their hearts and minds, what are people going to do? Build a few tents on the hill and go back to nomadic life?”

“Rockland County is prejudiced,” she concluded. 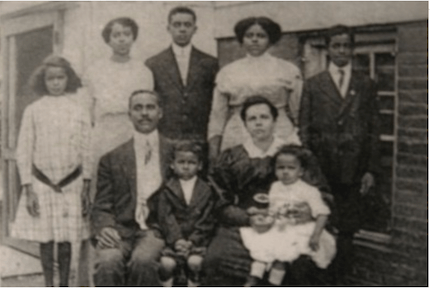 Frances Lillian Avery Batson as a child on Jackson Avenue. Standing, second from the left.

Her blunt remarks were made just four years after the horrific murder of Emmitt Till, and one year before the student sit-in movement was launched in Greensboro, North Carolina. America and Rockland County were at a crossroad.

Born in 1888, my grandmother was 33 years old when the Greenwood District of Tulsa was burnt to the ground. In some ways, I am sure the removal of black families in Nyack felt like a bureaucratic form of that same extra-legal violence.

When my grandmother made her observation about Rockland County, the reward for fighting for civil rights was termination, incarceration, intimidation or worse—not induction into a Hall of Fame. But she had the courage to risk everything and speak out at a public meeting.

So today, as I accept this honor in her name, and I wonder what she makes of what she sees, looking down from heaven on her county and her country. 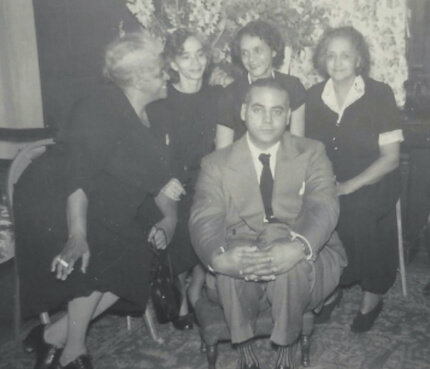 My grandmother and her siblings. She is first on the right.

She would see a country where outrages like Emmit Till’s murder still occur, followed by movements similar to the sit-ins.

She would see the video of an unarmed black man in Minneapolis have his life drained from his body, nonchalantly, by an expressionless police officer.

She would see that same black man’s daughter, one year later to the day, welcomed into the White House, the door held open by a marine in the President’s detail.

She would see an insurrectionist mob storm the United States Capitol, rallying behind the Confederate flag.

Then, a week later, at the same capitol building, she would see a black, female youth poet laureate recite for an audience that included the first Black and Asian female Vice President of the United States of America.

She would read racist insults  hurled casually and without shame on Facebook groups here in Rockland County.

She would also see a community of all races come together at Mount Moor to restore a burial ground that in her lifetime was segregated, neglected and almost obliterated. 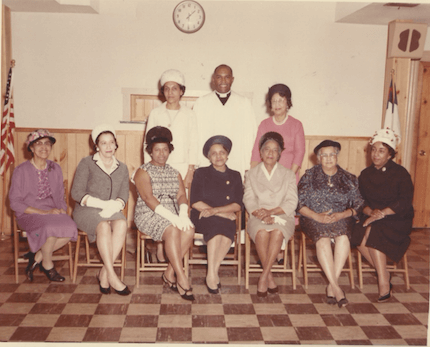 Basement of St. Philip’s AME Zion Church. My grandmother is seated, second in from the right.

She would see a country that is always at a crossroads. In one direction, the moral wreckage of racial violence, in the other direction, multiracial cooperation and equity.

If my grandmother was here today, she would say that although prejudice is still alive and well in Rockland County and America, so is the spirit that inspires people of good will to speak up and protest.

I am so proud and deeply thankful to have Batson added to the names on the wall in our county legislature, joining names like Holland, Pratt, Blount, Cooke, Easter and Frank.

I am equally honored to be inducted with this year’s names, Golden, Greco, Langer and Nagin. I’m using family names because you can not be involved in civil rights work without the support of your family. 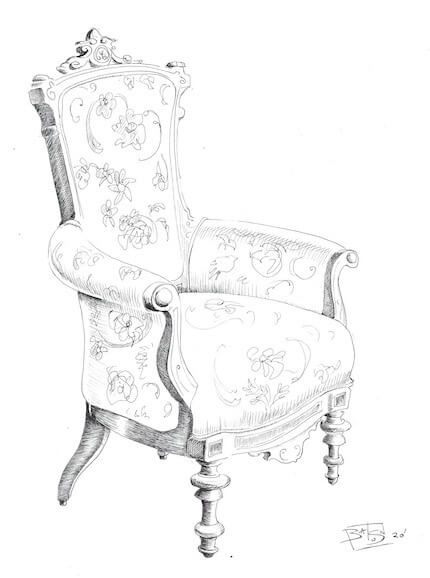 Each generation must decide which direction our county will travel—away from, or toward, the precipice of intolerance.

My grandmother’s example set my feet on a path toward peace and justice. A path that has led me here today, and a path I will continue on tomorrow.

I live in a house on the land where my grandmother worked as a maid. Frances Lillian Avery Batson spent decades as a domestic for the Jewett family in Upper Nyack.  Several years ago, my fiancée and I moved into a cottage on property the Jewetts once owned.  We have placed my grandmother’s favorite chair in a place of honor over looking the Hudson River, facing the view I am certain her work ethic never allowed her to enjoy.

Like many prized possessions of families without abundant means, this chair was almost lost forever. Few can afford to maintain or store furniture from previous generations. These items are lucky to be given away or sold. Most often, they are literally dumped on the thrash heap of history.

In the constant shuffle of expanding and contracting families, grandma’s chair was sent off to be reupholstered and got abandoned at the antique store.  I have Muhamad Mahmoud of Antique Masters to thank for its salvation. With one broken arm, sagging underneath the weight of threadbare fabric, the weakened chair was no longer suited for seating. So I brought it to Mohamad.  I was lured by his sign “Bring me your broken chair, old lamp and your damaged table, and I’ll fix it and save you money.’

I paid for the service, but did not return when the work was completed.  We were in a very cramped apartment and could not find room for the precious piece of furniture. 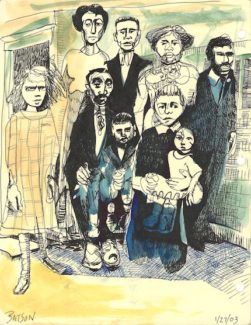 Grandma is first from the left in the back row

In desperation, I tried to donate the chair to the collection of a local historic preservationists. I argued that the chair represented the middle-class black community in the center of town along Jackson Avenue that had been destroyed by urban renewal. That this chair was the last thing standing. But alas, they did not have the space for furnishings.

Despite my lack of retrieval of the chair (that I had by that time left behind for two years), it was not discarded or sold-off to cover the cost of storing it, instead Muhamad hung on to it for me. He understood the importance of the chair. One day as I walked down Main Street, on the opposite side of his shop in a  not so subtle attempt to avoid Muhammad’s gaze, this earnest and honorable man intercepted me and said, “It’s your chair, come and take her back.” 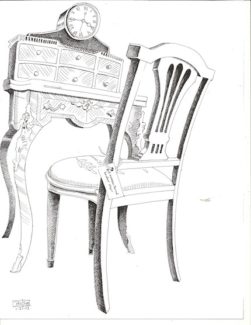 It just so happened that Marisol and I had just moved into the cottage on the Jewett estate. And suddenly, in a bolt of recognition, I realized that the stars had aligned for my grandmother to return to her place of employment. (Thank you, Mohamad. My family is eternally grateful).

Chairs were very important in our household, or any hardworking homestead.  Elders got special chairs that no one else could sit in. If you were cheeky enough to rest in one that was spoken for, you had to vacate from your surreptitious squat swiftly, when the rightful chair-heir arrived.

The chair would face the window with the most bucolic vista, or be closest to the fireplace or TV, whichever centerpiece families would gather around.  In later years, with the advance in chair technology, the chair of honor would be the one that reclined. 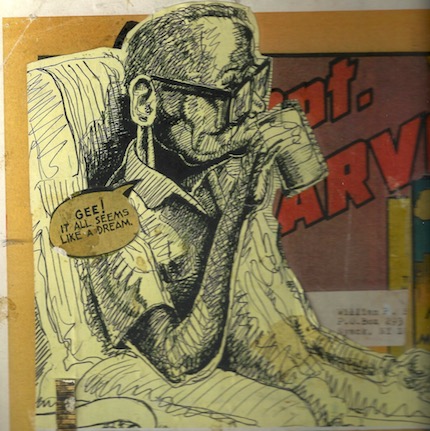 As one aged, one got closer to inheriting the chair. The music of a funeral dirge would elevate you to that seat.  I took my dad’s chair when he passed.

My father loved his chair. As a working man, he would rest his Schlitz beer on the TV tray and watch the news. During his slow decline, he would recline and bounce his feet when we’d play the music of his youth. He looked so secure in his seat. He was there for two meals each day and probably too much television watching and many naps. His chair might as well have been at the helm of a ship that sailed 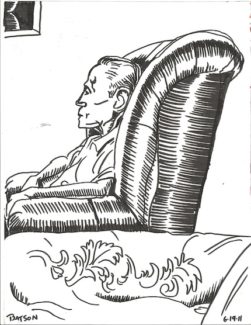 seas or flew through space. There, he was master and commander.

As supreme as my family may have felt at home, outside the house in the 30s, 40s, 50s, ad 60s things weren’t so sanguine for people of a darker complexion. American custom and culture of racial hierarchy dictated lesser roles. Even though my aunt had her own business, Batson Secretarial services, and my grandmother was a civic leader and a deacon, with as much power as any man or minister in her church, in the world of work, they were given servile parts to play.

But even within confines of the oppressive order that relegated one gender and any non-white person to servitude or second class citizenship, (a state of things that is shockingly still in effect), the Batson family never bent the knee.

My aunt rose close to the apex of public service as the Deputy Village clerk for the Village of Nyack and my grandmother most certainly was a competing matriarch in the homes that she visited dressed as a domestic. For example, in addition to her domestic duties she doubled as a Latin tutor. When I was a child, she would have me recite Cicero’s speech to the Roman Senate given in 63 BC: Quo usque tandem abutere, Catilina, patientia nostra! 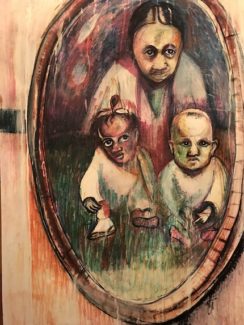 My grandmother, my aunt Adeline and my father Prime Batson circa 1930

On holidays, in the 70s, for as long as she had the strength, my grandmother continued to help her families with large meals. As a teenager, I found the arrangement wholly unacceptable. She would stay up all night before Thanksgiving cooking for us, but then leave the family table on the morning of the holiday to help others find comfort around their hearth.

There must have been some intense compassion that drove her to leave those she loved so much to work so hard for others. She must have found that the money that she received paid more than bills, but allowed her to share her love by deepening the security of her progeny. She owned her home, but I’m sure she succumbed to the reality that houses always need fixing.

And the families that she visited must have treated her in a way that kept her from retiring her crisp white maid’s uniform. I had a public school classmate in Teaneck, David Geller who had family from Nyack. They were lucky enough to have my grandmother tend to their holiday table. When we made the connection that my grandmother worked for his mom’s family, I detected only a reverence at the fact and no superiority in his tone. 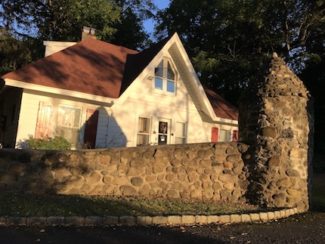 My grandmother’s chair came back to the Jewett estate in a trip that she bought and paid for with a life of service, dispatched without bitterness or contempt.

Her chair now faces the river she never watched as she scrubbed and fussed over some else’s stuff so that her grandchild could sit watching the water..