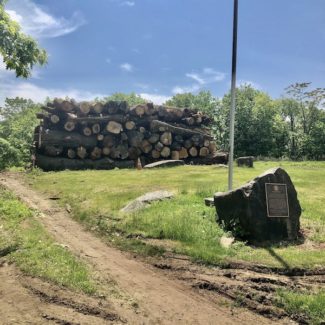 “Ch-ch-ch-ch-changes” sang David Bowie in the timely song Changes 50 years ago, just as America began secret negotiations in Paris during Memorial Day to end the long and bloody Vietnam War. Today, 50 years later Rockland County Vietnam Vets will once again light Memorial Day vigil watchfires in memory of those who died, were wounded or served in the Vietnam War or are currently serving in the Armed Forces.

Returning Vietnam vets were often treated with scorn and contempt by those who stayed behind for reasons of conscience, indifference, or simply a high draft lottery number. 1971 was a year of a great social rift that is, in some respects, still felt in America. By 1987, most who lived through the conflict as young adults had matured. The social contract was still torn but a new respect entered the picture for those who served. In 1987, five watch fires were lit in Rockland County sponsored by the Vietnam Veterans Association Chapter 333 of Rockland County. The watch fires not only became a local tradition but caught on nationally.

Visualization of the watch fire at ending of Revolutionary War.

Watch fires have a long tradition in the lower Hudson Valley.  Near the beginning of the Revolutionary War, Washington ordered beacon fires made from logs stacked at ninety degrees with each other, 14’ square at the base and rising some 18’ high. A sapling with a tarred wick stretching up to 30’ was placed in the middle. It took 24 men working all day to build a beacon. The first beacon or watch fires stretched from the Watchung Mountains and up into the Hudson River situated on geographical overlooks. Beacon, NY, is so named for its Revolutionary War beacon.  The movements of British troops and the navy could be quickly communicated. The watch fires worked 24/7, flames at night could be seen for miles. During the day, the watch fires were made to smoke. The end of the Revolutionary War in 1783 was announced in the Hudson River Valley by setting off watch fires along the Hudson River.

Some 25 different places claim to have originated Decoration Day, so named because it was a time when fallen Civil War soldiers’ graves were decorated with flowers. The generally accepted national origin is 1868, at least in the north, when General John Logan issued a proclamation setting aside May 30 as “Decoration Day” to be observed nationally and annually. As time went on, all veterans of all wars were to be remembered.

The use of the term “Memorial Day” was often used in place of “Decoration Day” but not commonly until after WWII. Congress passed a law that enacted in 1971 making Memorial Day the last Monday of May, thereby creating the three-day weekend we now have. 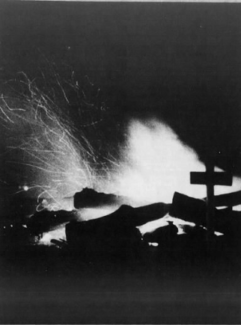 Photo of first watchfire at Piermont Pier by Art Gunther.

Jerry Donnellan, a stage production manager, organized the Rockland Chapter of the Vietnam Veterans Association in February 1987. Their first big project was building watch fires in five locations on May 30 to honor fallen Vietnam vets. The first fires were built in classic Revolutionary War mountain-top locations; Clausland, Hook, High Tor, and Bear Mountains.  Piermont Pier was added as symbol for the many soldiers that debarked from the pier bound for Europe in WWII. It requires tremendous effort to build large watch fires on mountain tops and then manage the fires for a 24-hour period. Over the years, the fires were lit at 12:01a on the traditional Memorial Day of May 30 and ran for a full 24 hours.

The first watch fires in 1987 were such a compelling idea that other watch fires appeared the next year in Orange, Putnam, and Dutchess Counties, along the Delaware River, along Lake Erie and Lake Michigan, in Texas, and on Pikes Peak, Colorado, to name just a few.  The drama of mountain top watch fires is not only difficult to build; it’s hard for the public to participate. Over time the watch fire at Hook Mountain was moved to the base of the mountain then discontinued. The Bear Mountain watch fire also disappeared. In 1997, the fire atop High Tor was moved to Bowline Point Park to allow for more public participation. Today the watch fire on Clausland Mountain on the south side of the Nike Missile Park is the remaining hilltop watchfire.

In 1996, Eugene Levy park in Ramapo was added as a site. In 1997, an old wooden barge loaded with wooden debris was prepared as a watch fire in the Hudson River south of Memorial Park. The wood was too wet and the fire only smoldered. An onshore wind drove smoke into the villages and the fire department had to put it out. A special watch fire salute occurred on Veterans Day in 2001 on the Piermont Pier on Veterans Day as a memorial for the victims of 9/11. 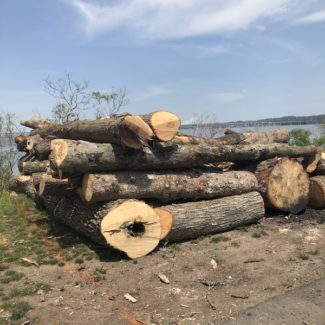 The fires are huge. Just as Washington once mandated, large tree trunks are interlaced in a tall stack. The hilltop fires once used helicopters to deliver wood. Local tree services and contractors with heavy equipment give of their time and resources to build the fires. Local fire departments are involved for safety.

In 1999, Art Gunther, then a reporter with the Journal News counted 110 rings on one trunk at Piermont Pier watch fire. The tree was once alive, Gunter noted, during the Spanish American War, WWI, WWII, and the Korean and Vietnam wars. Flames that consume the tree’s silent vigil during so many wars, is an apt symbol for remembrance of those who were lost.

The vigil process at each watch fire is somewhat different. Generally, a bayonetted rifle is stabbed into the earth with a pair of clean jungle boots fully laced at its base, symbolizing the spot where the fallen warrior last stood in defense of liberty. A helmet placed on the rifle butt provides the warrior protection against the suffering and pain of war. A ceremony proceeds the fire lighting usually at 11:30p. Names of the 46 fallen and missing Rockland County vets are called out, sometimes punctuated by the ringing of a bell, sometimes with a rifle salute. At one time, Howitzer artillery pierce accompanied the watch fire at Levy Park. Now the ceremony starts with a three-gun salute and a bugler playing taps. Bagpipes play Amazing Grace. At all sites, worn flags that need to be retired are accepted by the vets and made a part of the watch tower vigil. 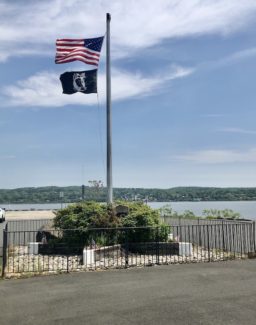