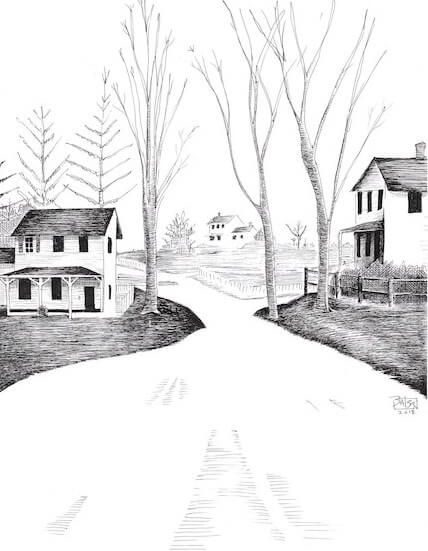 June Sundvik must have smiled down from heaven when SUEZ Water withdrew their proposal to operate a hub for 100 utility trucks on her beloved Old Mill Road. I was honored to work with the artist on her memoir during the last 2 years of her life. Despite discomfort and weakness, she was determined to share the bucolic tranquility of a community that is now host to the eighth largest mall in America, a quarry, and a global water company known locally for their malodorous product. Thanks to June, we have a sense of pre-overdeveloped eastern Rockland County.

I met June at the Valley Cottage Library in 2015. “I’m writing a book and you’re going to help me self-publish,” she informed me. “Sure,” I replied, thinking I would never hear from her again. A couple years later, I answered a call from an unknown number and heard the party say, “I’m done writing. Let’s get this published. You promised.” That determined voice was a force of nature named June Sundvik.

My bluff had been called. I never expected June to call back. The way forward required acknowledging a tragedy. June sought my guidance because I had self-published Nyack Sketch Log Volume I. However, without the wisdom and dry wit of Jim Hershberger, my tome would have never been published.

Jim was a retired executive who made it his second life’s mission to provide tech support to historical societies and non profits (and tail-gate every Giants home game). Jim vetted printers, compared notes with other self-published authors, and helped me organize my sketches, essays, and thoughts. The only way that I was able to help June was by reverse engineering what Jim did for me. Jim passed away on November 11, 2016. His loss is profound, but so is the continued resonance of his generosity. 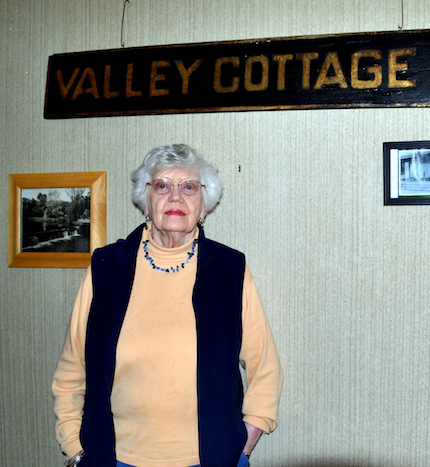 June Sundvik was able to benefit from Jim’s intrepidness, channeled through me, to publish an exceptional local history entitled Life on Old Mill Road from 1750 to 1950. Her family moved to Valley Cottage from Teaneck, New Jersey to a property that her grandfather, Carl Anderson, purchased in 1927.  Her father, Gustav Svahn, was a very prominent builder responsible for 10 homes on Old Mill Road and many others throughout the region.

With the help of fellow Swedish immigrants, Svahn built a garage, a flat-roofed 4-bedroom house, dug a pond, created a causeway and an island in the pond, and expanded the original flat-roofed house to 3 stories with a cathedral ceiling living room, for his family. The man-made and augmented natural features were so impressive that Charles and Ann Lindbergh were seen admiring the property from the road. 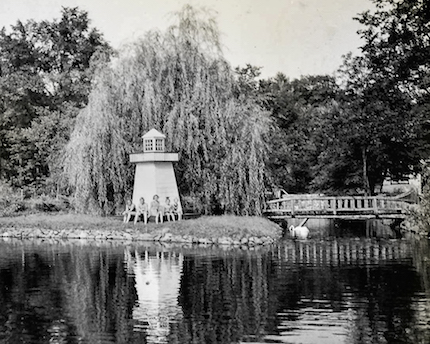 June was born to Gustav and his wife Clara in n July of 1928. She was the youngest of 3. June’s personality was clearly shaped by her father’s blizzard of building. You can see the genesis of June’s aesthetics, resourcefulness, and resilience from her descriptions of her father. “Besides being a builder, he loved gardening and flowers,” she wrote of her father. “He landscaped the property with plantings; some were formal, but most were placed in natural settings. The hillsides were dotted with daffodils, climbing roses grew around the pond, and rock gardens were tucked away along the paths.”

His prolific construction projects also contained a playful aspect. He built a miniature lighthouse, a shed for their beloved swans Hansel and Gretel to winter in, a playhouse for the children, and houses for the dogs. June’s hobby horse was deployed as a weather vane on a barn. 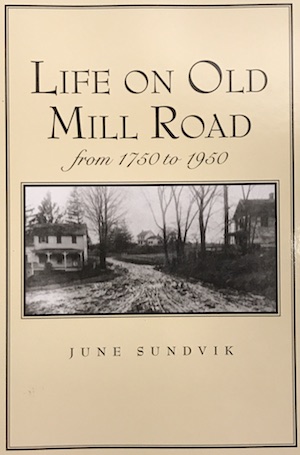 June has witnessed the steady migration of families through the many homes that her father built along Old Mill Road. She has constructed her narrative, like a good builder, on a strong foundation of primary source research.

This story started many years ago when I was taking home an old neighbor friend, Catherine Daniels, who had been helping me clean house,” June said. “She asked me if I was interested in some old books and artifacts from the old Fisher farm, which also had been torn down in 1933. She began writing in earnest when she was given a wooden chest full of old deeds and title search from her sister, Stina. Because I lived on Old Mill Road almost all my life, and remembered many of the families I decided to tell the story about their lives and the history of the homes they lived in. Although I included a few homes on the West Nyack part of the road, I concentrated on those that were in Valley Cottage, beginning where the Kill Von Beaste flows into the Hackensack River, north to Kings Highway. 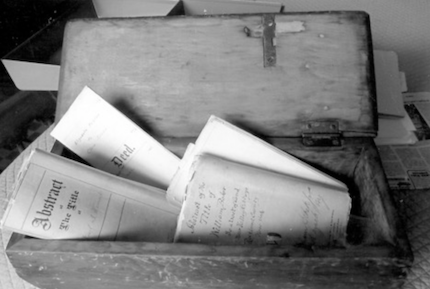 The result is, like June, artistic and sturdy. Her words are illuminated by historic family photos, many carefully restored by Dr. Arnold Roufa. She narrates with the economy of a no-nonsense storyteller who gets out of the way of her subjects.

One of my favorite extended passages (1,144 words) is a an oral history taken by a granddaughter, Dotty Larson, describing her grandmother’s somewhat scandalous, poignant, and epic love affair with a man for whom she was hired to serve as a housekeeper and cook. 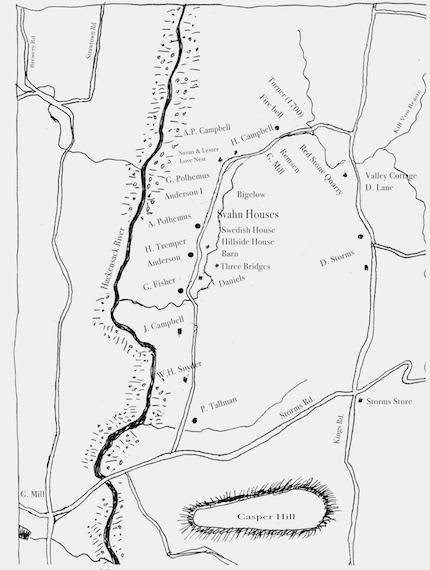 Her final job came when she became the housekeeper/cook for Lester Polhemus on Old Mill Road in Valley Cottage. They became something of a love match between 2 adults who had buffeted in life and were happy to be in each other’s company for the final stretch.

The little house where Susan and Lester lived had only two rooms with an attached summer kitchen. It was full circle for Susan because it was similar to the one she lived in as a child in Glen Cove. It had no electricity, no running water, and was heated by a large iron wood stove that had become popular after open-hearth cooking became outdated. For furniture, there was an oak gate leg table, straight back chairs and a large floor to ceiling wooden breakfront with glass doors and drawers below for storage. A daybed was used for sleeping or seating in the main room. The bedroom had a large feather bed draped in white quilts and pillows. There was a hand-crafted blanket chest made of pine by local artisans. 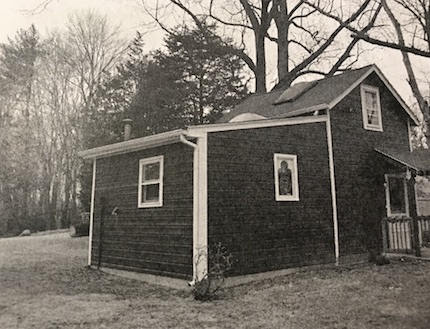 There is a contemporary photo of their love shack taken by her son Carl Sundivk. The structure still stands off of Old Mill Road and should have a plaque.

As much as one might find a strong influence of the father in June’s life, Old Mill Road itself became her mentor. A litany of creatives seems to have gravitated to the spot that the Lindberghs found so alluring.

During the last 50 years these extraordinary artists have lived on Old Mill Road: 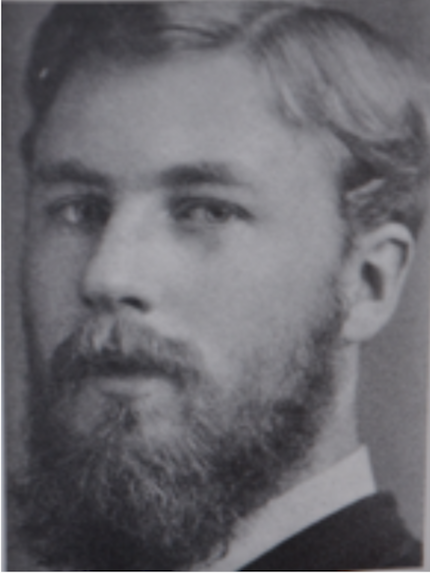 Clement Heaton was born in England to a family of glass makers and decorators, and he had connections with William Morris. His  works were sold in London, Paris, Vienna, and Berlin. He bought the mill house and he was able to build the framework for his stained glass windows. There, he made important windows for St John’s Cathedral in New York.

His son Maurice continued the art of glass making and develops a method of enameling on glass. With a group of fellow artists, he founded the Rockland Center for the Arts, and even had a studio named for him. He was honored by the Smithsonian, with a piece of his work in its glass collection.

A renowned stained glass maker, Pinard moved from France to the U.S. in 1951. Pinard transformed darker stained glass images by creating new glass scenes that allowed light to enter the churches. His works can be seen in the National Cathedral in Washington. 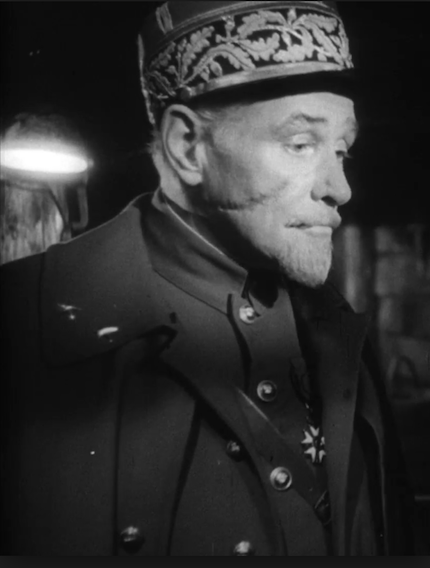 George was an artist who studied in Paris and Florence. He was fascinated with the mountains in Norway and spent many summers there, painting them. He was the son of the famous Rube Goldberg, and while living on Old Mill Road had a large celebration for his father’s 80th birthday in the field across the stream from the house.

Sickles shared a studio with Milton Caniff who was working for the Columbus Dispatch. Both men moved to New York City and worked for the Associated Press, where they worked together for 2 years, often drawing each other’s comic strips. He had an impressionist style of inking and proved to be adept at using a shading called zipatone. When LIFE published Hemmingway’s The Old Man and the Sea, Sickles was the illustrator. Some say he was the best illustrator ever. 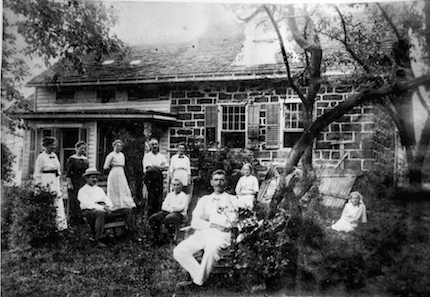 George was an actor on Broadway and in Hollywood. He was a good friend of Vincent Price, and at one time they had an art gallery together. George was well known for his part as Rita Hayworth’s husband in Gilda. 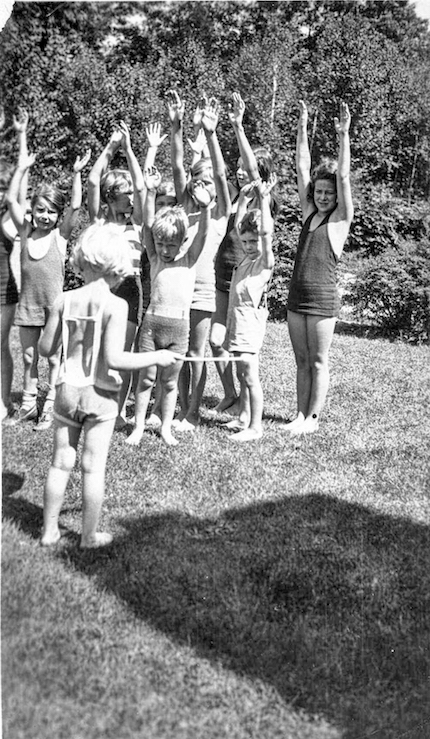 There are too many stories that surround us and not enough storytellers.

I hope that June’s example will encourage others to liberate their family photos from dusty albums,  scribble down some thoughts, sketch out some memories and cook up some books full of the recipes for living.

I’ll give June have the last word.

“Every road and every house has a story, which is ongoing, and what I have written is only a small window into the lives of the neighbors that lived on Old Mill Road starting with the early settlers of the 1850s and through the changes that were made and homes that were added for the next 100 years to the time that the reservoir was built. Much of this information came from old records, and the fact that I knew many of the families, as we were a neighborhood, often depending on each other.

“I consider myself lucky to have been part of these creative people, who helped me develop interests far beyond everyday life.”