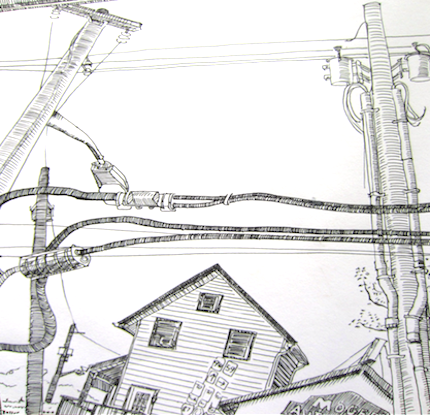 Rockland County’s fragile power grid failed last week for the third time in the last nine years. Do we have the infrastructure to match the intensity and frequency of these modern storms?

I know that some may say the cost of burying our electrical grid is too great to consider, especially during a pandemic-stalled economy. This is one place where we can learn from local history: both the Palisades Parkway and Harriman State Park were conceived during the Great Depression, an earlier period of massive unemployment. If that generation was able to rise to the challenge, putting people back to work and investing in the future, why can’t we do the same?

Utilities like Orange & Rockland need to demonstrate that they can cope with super storms. In the aftermath of Tropical Storm Isaias, the town supervisors of Rockland County’s five towns sent a letter to O&R President and CEO Robert Sanchez demanding that he “conduct an internal review of your preparedness and response procedures and to subsequently issue a public report that enumerates how you intend to prevent the type of debacle that we have seen in the wake of Tropical Storm Isaias.” Hardening the power grid by moving it underground should be part of that study.

If utilities need funds to update their infrastructure, or even radically change the delivery system, like burying power lines like New York City did after the lethal blizzard of 1888, then they need to put those costs on the table.

Can our public health and safety and our economy survive a yearly two-week power disruption?  Since O & R has a virtual monopoly of delivering electricity, the legislature needs to find a way, through either incentive-based or punitive measures, to encourage public utilities  to make these needed infrastructure investments.

Last week’s Tropical Storm Isaias impacted many area residents who were left without power. In response to a letter to Orange & Rockland Utilities O&R President and CEO Robert Sanchez from Orangetown Supervisor Teresa Kenny, Clarkstown Supervisor George Hoehmann, and the Haverstraw, Ramapo and Stony Point town supervisors, O&R has agreed to provide reimbursements to customers who were without power for 48 hours of more.

O&R will reimburse customers for food and prescription medicine spoilage if they lost power for 48 consecutive hours or longer during Tropical Storm Isaias. If you lost power for more than 48 consecutive hours as a result of the storm, please fill out a claims form at oru.com to cover your costs for spoiled food, medication, or perishable commercial merchandise. Residential customers may receive reimbursements for up to $235 with an itemized list, or up to $540 with an itemized list and proof of loss (with receipts, photos etc.). Commercial customers are eligible for up to $10,700 for losses of perishable merchandise spoiled due to lack of refrigeration (with receipts, photos, invoices, etc.).

Requests for reimbursement must be filed on or before Sept 8, 2020. If you do not have computer access but wish to file a reimbursement form, call O&R Customer Service at 1-877-434-4100 and they will send one. 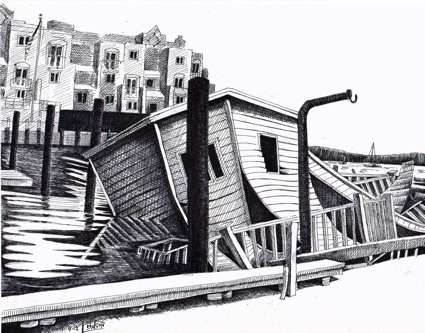 Stand at any intersection and look up and you’ll see our 19th century power grid struggling to meet our 21 century power needs. In our houses and apartments, we have supersized our electrical conveniences. The fixtures and appliances in the rooms where you sit and the computer that you are using to read this column are powered by a precarious network of wires. With the pandemic converting homes into classes and offices, if we are sitting in the dark, we are not just missing our favorite Netflix feature, but work and school as well.

The violent storms that caused our blackouts were predicted by scientists as a result of our over-reliance on fossil fuels. Our energy gluttony threatens our continued energy gluttony. Who said Mother Nature doesn’t have a sense of humor?

Think of our electric grid like a bridge built in the 19th century. When the first suspension bridges, like the Brooklyn Bridge were built, ground transportation was accomplished by horse, cart or foot. After the invention of the car and the growth of suburbs and a national network of highways, lanes had to be widened, levels added and new bridges built. Our 21st century appetite for power runs on a 19th century electrical grid. We have built an information super highway without upgrading our electrical on and off-ramps. 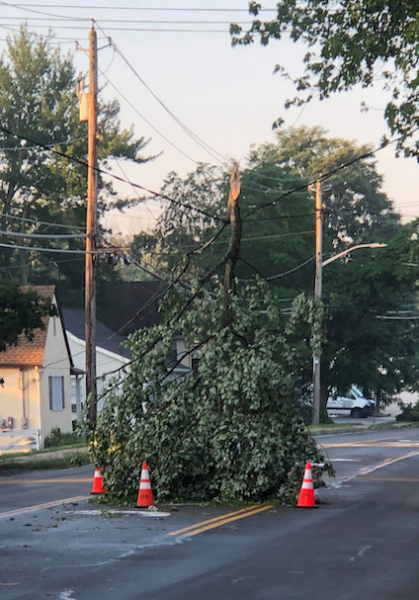 How long will our over consumption of energy and our under investment in infrastructure continue?

As of this writing, thousands are still without power from Tropical Storm Isaias. Some have had electricity restored, but are unable to access the Internet. If the delivery of electricity was a competitive service, how long would you keep a company that had an epic fail that destabilized your life on an average of every three years?  These disruptions often come during the heat of summer or the cold of winter, making the circumstance more than just uncomfortable but hazardous to your health. 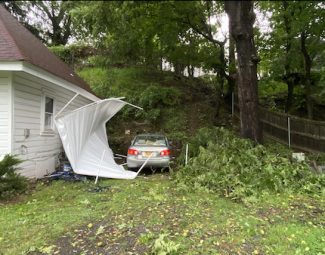 The home of the author after Isaias

In their letter to O&R, the Rockland County Town Supervisors said: “In light of your history of repeatedly running to the New York State Public Service Commission with rate hike requests, our residents having to pay exorbitant utility costs and your parent company, Consolidated Edison Company of New York., reporting adjusted earnings of $451 million in the first quarter of 2020, it is incomprehensible that you would not have the wherewithal to be better prepared for a storm of this nature.”

When the lights go back on, there should be another storm, this one of public discontent. With the frequency of “100 year storms” becoming almost a yearly occurrence, we need investments in infrastructure that can withstand life threatening catastrophes caused by climate change. Winds seem to be getting stronger as our private and public systems get weaker. It is time to be bold and vigilant, not timid and acquiescent.