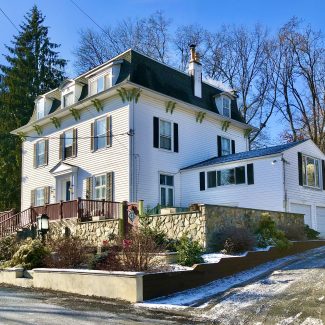 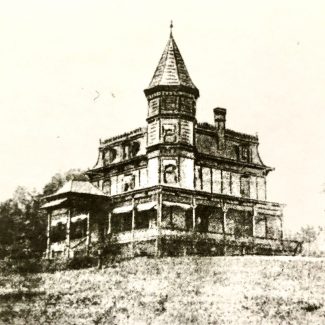 Vose Villa in an 1889 line drawing from The Daily Graphic, The “Naples of America.” A Picturesque River Town.

I’m talking about Colonel Richard Vose, one of the early business barons who purchased Upper Nyack farms to build large second homes and estates overlooking the Hudson River. Vose Villa, perched above Broadway and overlooking the Hudson River, was, in the words of the New York Times, “one of the most beautiful homes along the Lower Hudson” owned by “one of the wealthiest and best-known residents of Nyack.” This is his story.

Richard Vose was born September 2, 1830 in Whitesborough, Oneida County New York. He was orphaned at the age of 13 and was responsible for the support of his two sisters and two brothers. At 20, he was living in a boarding house in New York City with his four siblings, now 8, 11, 14, and 17 years-old. By 30, Vose was listed as a clerk in the 1860 census, married, with a 7-year boy named Frank, two servants, and his mother-in-law, Sarah Bullock.

Vose started working at age 15 as clerk for the leading stationer and printer in New York City, Francis & Loutrell. He took a job with another stationer outside New York but, missing the city, returned as a secretary for a mining company in 1854. Finding his duties uncongenial, he took a new job as superintendent of the manufacturing department of the Metallic Car Spring Company. He soon became an expert in making car springs for the booming rail, streetcar, and wagon markets.  He took out over 60 patents mostly for car springs. 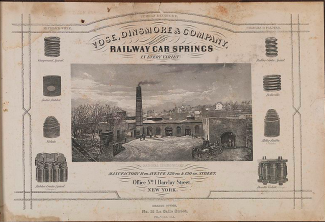 Vose railroad car spring manufacturing facility in New York City in 1876 along with samples of his springs.

By 1868, Vose started his own company, Vose, Dinsmore and Co. with headquarters and manufacturing in New York City. In 1876, he became President of National Car Spring Company where he developed an efficient spring for city roads that was practically in universal use during his lifetime.

But it wasn’t all roses for the millionaire. In 1878, he filed for bankruptcy, probably as a result of the Panic of 1873 affecting the Mutual Benefit Savings Bank, where he served as Vice President.

Even after moving to Nyack around 1886, manufacturing was still on his mind. The Rockland County Journal reports that Vose leased the Smithsonian Hall, a large hotel and meeting hall on lower Burd St. in Nyack for a factory. Whether he produced goods there is not recorded.

Vose became a private in the National Guard at the age of 26 in 1856 in the 7th Regiment. The 7th was known as the “Silk Stockings” or Blue-Bloods” because of the many elite New Yorkers among its ranks. By the outbreak of war in 1861, he was a lieutenant in the 22nd regiment.

Vose continued to serve after the Civil War while maintaining a busy career in manufacturing. He was elected colonel of the 71st Regiment in 1872. The regiment had a proud tradition, having saved Union forces at the first Battle of Bull Run by aiding the retreating soldiers. In the post-war period, the National Guard was quite visible, parading in the city and handling ceremonial duties. Colonel Vose is cited over 1200 times in the New York Times.

He is credited with arranging a Mission of Peace for the Regiment to New Orleans in 1881 that by all accounts was successful in drawing together the South and North. Being that it was Mardi Gras, Vose was presented by a man masked as a Napoleon courtier with a banner showing the French colors and a staff surmounted by a silver globe.

In 1881, Vose endured both highs and lows. There was his stellar performance in New Orleans and but also the death of his wife in August.

Vose married again in 1883 to the 71st Regiment Paymaster’s daughter, Jane Guibert. A lingering illness followed in 1884. The personal distractions meant inattention to his command. In 1884, under accusations of financial mismanagement by Colonel Vose, 15 company-grade officers resigned. Colonel Vose blamed the problems on the Veterans Association. Everything came to a head, and Vose resigned.

Vose Villa, the Mansion on the Hill

In 1888, Vose purchased a large old-fashioned house on the old Sarvent farm on a hill near Highmount Ave (then labeled “High Mount”), with a view overlooking the Hudson River. Aside from the fully built-up neighborhood clustered around the old boatyard and the intersection of Castle Heights and Broadway, Upper Nyack was mostly fields. 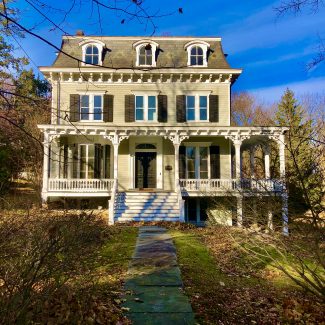 The Pommery House on Highmount Ave. built in the 1850s was a smaller second-empire neighbor of Vose Villa without a tower. The house has maintained its original appearance.

The remodeling of the old house into a mansard-roofed Second Empire-style house was handled by the builder, William E. Blauvelt. The ground floor contained the kitchen and laundry. The first or main floor had double doors opening out onto a 10-foot piazza that ran around three sides of the house with magnificent eastern views ovf the Hudson River. Inside, the first floor had a mahogany-finished parlor, library, butler’s pantry, and dining room.

There were four bedrooms on the second floor and another three on the upper floor ( plus a billiard room and a sewing room). The Colonel saved the best room for himself: his bedroom was at the top of the 72-foot high tower.

The house had the latest in technology. It was heated by a furnace and had gas lights. Each floor had a fire hydrant to which a hose could be readily attached. The electric system included a burglar alarm connected to each window and door. The alarm indicator was located in Vose’s bedroom. The large yard was fully landscaped and U-shaped driveway circled the house and led to a barn.

A Great Place to Party 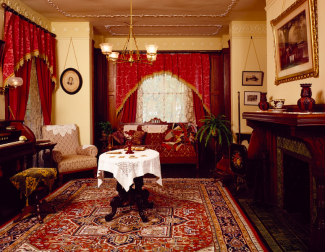 The mansion was home to a number of large parties, including a drama and music reception in January 1890 for 40 guests. The guest book read like a gilded age who’s who of Nyack. There was Senator Clarence Lexow and his wife; Arthur Tucker and his family, who lived in Larchdell, a mansion near Hook Mountain on Broadway; and other Upper Nyack estate holders, like the Brush and Chapman families. Miss Amy Vose played Rossini’s Overture to William Tell, others performed banjo solos, duets, and sketches in character, and sections from Bulwer Lytton’s popular play The Lady from Lyon. Colonel Vose sang the Irish ballands, “The Low Back Car” and “The Widow Macheree,” all in costume. As an encore, Vose recited John Hay’s poem Little Breeches. Flowers, dancing, and a collation (light meal) rounded out the evening.

Vose’s daughter Sarah Amelia, known as Amy, was secretly married in 1892 to Richard Crane of Brooklyn. Many Brooklyn newspapers and the Rockland County Journal carried the story. Brooklyn Life labeled Crane a gold digger. Apparently, they were engaged three years before. As Crane was a “mere” clerk at Lawyers’ Title Insurance Company, Vose demanded that they wait until Crane could support Amy in the manner in which she was accustomed. Crane’s father, who was not a millionaire, agreed.

The couple decided to elope and were married secretly in January. When Vose was recovered from an illness in April, Amy made a tearful confession. As the newspapers said, “being a sensible millionaire” Vose notified the newspapers and his new father-in-law, and sent off Amy with his blessing. 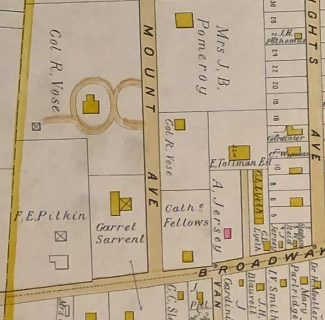 Detail of an 1891 map of Upper Nyack. Vose Villa is shown on the upper left. The intersection of Broadway and Castle Heights is at the lower right.

Vose was a prominent man in Upper Nyack, serving as Upper Nyack’s second mayor. As some suggest, he was known to drive his flock of geese for walks to the Hudson River, and thus, became the source of Upper Nyack’s moniker, Goosetown.

Vose was an active sportsman. He chaired the Nyack Rifle and Gun Club meetings, including dinner at the St. George hotel. At least once while living in Nyack, he summered for 6 weeks fishing at the Thousand Island home of railroad magnate George Pullman with whom he had many business dealings.

Richard Vose, Nyack’s first self-made millionaire, died after a brief illness at Vose Villa on February 25, 1893 at the age of 62. 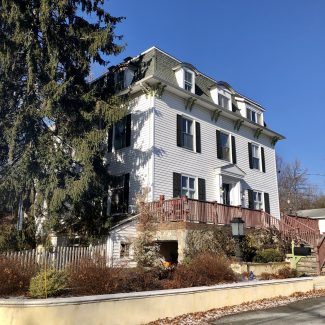 Side view of Vose Villa today. The “basement” floor once housing the kitchen is now fronted by a garage. Is the large pine tree from 1889?

Today, Vose Villa still stands, though much-changed, on Highmount Terrace. With the exception of the mansard roof, the double-bracketed mansard cornice, and the rounded tops to the mansard dormer windows, the second empire details are gone, along with the tower, windows, chimneys, porch, and roofed front stairway. Village Historian Win Perry, who grew up across Highmount Ave, remembers seeing the owner in an old car pulling down the 72-foot tower.

It’s unsurprising that the details of the house are gone. Second empire is perhaps the most expensive style of home to maintain, which is the reason many homes of this style are now museums. Likewise, many details of Vose’s life have also disappeared since the time when he was Nyack’s wealthiest resident who walked his geese to the river.