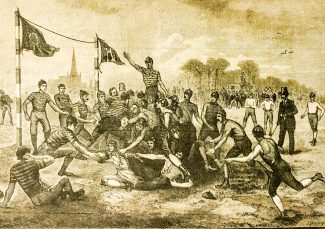 Weird goalposts. Odd helmets. A round ball. A player astride a teammate’s shoulders. No end zone or yard markers. Does this antique etching really depict American football?

Nyack artist Julian O. Davidson, a master of detailed marine paintings, created an etching for the December 7, 1878 Harper’s Weekly entitled A Game of Foot-ball. It is one of the earliest depictions of American football when the game was founded, merging the speed of soccer with the violent excitement of rugby.

The etching is puzzling. Many of the elements are unfamiliar to fans of football today. Did Davidson take creative license with the game for dramatic effect? What are the rules of the game they are playing by, if any? The caption to the etching helps:

a point in the game when one side has forced the ball almost to the opposite goal, and both       teams, excepting goal-keepers, close in and try to force the other back by main strength. During this struggle the opponents can not be touched with the hand, except the one holding the ball. In our illustration the lad holding the ball has succeeded (at the expense of a shirt) in wriggling out of the “scrummage,” and is handing the ball to one of his “half backs,” who will “touch it down” behind the goal for safety, thus securing a breathing-space and a new trial. The game requires speed, wind, and judgment, and if properly played, according to the revised rules, it is not dangerous. 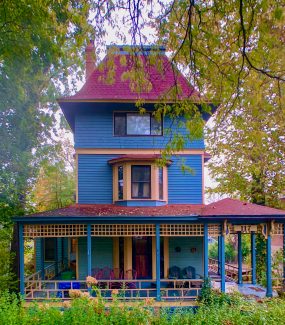 The house Davidson built in 1886 on S. Broadway

Julian Davidson is a forgotten Hudson River Valley artist. Born in 1853, Davidson summered in Nyack as a young man. He met and married Cornelia Merritt whose prosperous NYC family also summered in Nyack. The Davidsons built a large three-story Victorian house with river views at 117 S. Broadway in South Nyack that still stands. Davidson died in his artistic prime at the age of 40, his wife following him in death the next year. His house and remaining works of art were auctioned off to the public in Nyack. His work is now widely scattered, and one small painting can be seen in the Nyack Library.

Davidson was a knowledgeable and skilled marine painter. He produced a number of major works depicting realistic sea battles from the Revolutionary War, Civil War, and the War of 1812. He painted and made etchings of many local Tappan Zee scenes that depict Hook Mountain and the Tarrytown Light.

In addition to being a painter, Davidson sold a number of etchings to Harper’s Weekly, then the premier American magazine. With his accurate eye for detail, he was hired by the Harper brothers to tour the southern states and produce a series of etchings. 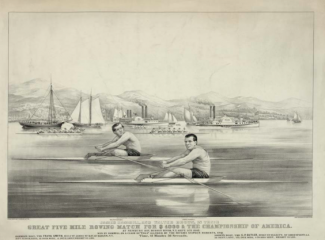 Davidson was not just a painter. He was a sportsman who, along with his brother-in-law, founded the Nyack Rowing Association in 1880. Aside from being an expert oarsman who often competed in local races, Davidson helped obtain funds to build one of the premier Victorian Hudson River boathouses on the Nyack waterfront. As a skilled athlete, it’s no wonder that  many of his etchings depict athletic competitions, from rowing to “foot-ball.” 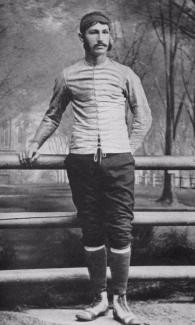 Walter Camp in his Yale uniform in 1878

American football began as a rather vicious English college mob game that pitted one team against another with few rules. Sometimes one entire class played another class. The game was dangerous. In the 1870s, college games played under a changing set of rules that merged soccer and rugby. Walter Camp, who was at Yale when Davidson made his etching, defined the modern game. In the 1880s, he thought to limit each side to 11 players, he introduced downs rather than “scrums,” and created regular scoring rules. By 1900, Camp would further define the modern game by adding the forward pass.

“A game of foot-ball”

Davidson’s etching is of a game between Columbia and Harvard, as seen by the C and H markings on the goalposts and on some of the jerseys.  A crowd can be seen behind the players. A set of referees stands behind the scrum. The shirtless player pitches the ball from the scrum in front of Columbia’s goal. It appears like Columbia is getting the worst of the action. 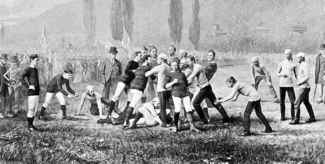 Harvard versus McGill in 1877. McGill introduced the rugby element to football

College teams at the time played by amended rugby rules. The ball was advanced by kicking or running. All players were required to be onsides (behind the ball) at all times. Touch-downs (a “try” in rugby) occurred when a player touched the ground with the ball behind the opponent’s goal (no end zone back then). Three touch-downs counted as a goal. Like soccer, a goal could also be made by kicking the ball between the goalposts. In some cases, a goal kick would be made after a touch-down.

The ball was advanced by carrying or kicking. Tackles stopped play. The ball could be downed behind the defensive goal for a “safety,” giving the defense a chance to start over. Kicked balls caught on the fly were called fair kicks.

Harvard and Columbia did not play in 1878, the year of Davidson‘s etching. But their game the preceeding year on November 5, 1877 is well recorded. The game was played at St. George’s Cricket Club grounds at 105th and First Avenue in Manhattan. A heavy rain caused the game to start 40 minutes late.

Foot-ball was already a spectator sport.  A Harvard loss to Princeton two days prior to this game is described in the New York Herald as being attended by 400-500 students, as well as “several hundred spectators, many of the number being of the fair sex, who came to the scene of battle in carriages.”

Each team had 15 players divided into forwards, half-backs, and backs. Columbia supplied the umpire, and the referee came from Princeton. Play consisted of two innings, each approximately 36 minutes long.

What Davidson captured in his etching

Davidson shows Columbia in a precarious position in front of their goal, a situation described in the New York Herald review of the game. The newspaper goes on to report that near the beginning of the game, Harvard had advanced the ball near the Columbia goal; one of the backs from Columbia then grabbed the ball, tossing it to a half-back who made a safety. This is the moment Davidson captures in his etching.

After the safety, Columbia worked the ball directly in front of the goal posts. Harvard intercepted and kicked the ball through the “stringpiece” for a goal in the eighth minute of the first inning. The route was on. One senses from the etching that Columbia is overwhelmed, as they were in fact.

The Harper’s Weekly caption suggests that the game is safe if played by the new rules. In fact, few injuries occurred despite lack of padding and infrequent use of helmet harnesses. However, injuries from fist fights, brawling, eye gouging, and body-spearing tackles were common. Referees had a difficult time controlling the game from such violent behavior. It seems as if the same holds true today. Despite modern equipment and an extensive list of penalties, the game remains a violent sport just as Davidson captured it 140 years ago in his memorable etching.