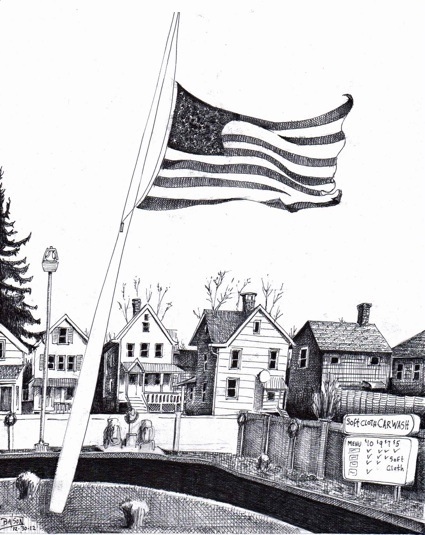 After a 20 year-old used a rifle and handgun to kill 26 people, including 20 children between six and seven years old and six adult staff members at Sandy Hook Elementary in Newtown Connecticut, I was certain that we had come to a crossroads in our nation’s history. The owners of the Soft Cloth Car Wash on Route 59 seemed to agree. They flew their giant American flag at half-mast for over two weeks, an honor typically reserved for the passing of a president.
The reason we fly a banner at half-mast is to allow the invisible flag of death to ceremonially occupy the top spot.
I was convinced that we would get up from the violently horrific event forever changed. Sensible gun legislation to prevent the wholesale slaughter of children in their classrooms would be enacted.

I asked my new research assistant, Clyde Lederman, to help me draft a sketch log about recent mass shootings by “looking for more than just raw numbers, but statistics that tell a story.”

Clyde enters 10th grade at The Masters School in Dobbs Ferry in September.

Please read the “research memo” he submitted only 27 hours later:

In the aftermath of mass-shootings, some prominent, a renewed groundswell of support for gun-control has percolated to the fore of American discourse. Yet, with 7,089 people injured since 2015 in mass-shootings little has changed.
This increased stagnancy has affected the legislative process. The startlingly inactive 116th Congress has only passed one law related to guns, which provides for increased public dollars for shooting ranges.
Sandy Hook, the supposed wake-up call and the many shootings that have followed it have inoculated us to the fear of being gunned down.
In the winter of 2013, the phrase “Sandy Hook Elementary School shooting” remained at one-hundred of one-hundred possible ‘interest points’ on Google Trends, a website that tracks internet search trends on the Google browser or elevated search activity above the average for nearly three and a half weeks. Four years later and after Orlando and Las Vegas and San Bernardino, when a gunman fired into a crowd of parishioners in a church in Sutherland Springs, TX killing 24, the term “Sutherland Springs shooting” remained above its average of zero interest points for only seven days.
This shift indicates a new trend in the American psyche, from being consumed with mass-shootings to our being increasingly uninterested in their effects. This is not to say the media does not spend a significant amount of time covering the aftermath of a mass-shooting, with nearly twelve days needed before coverage to returns  normal, (a far cry from the seven days of search abnormality after Sutherland Springs).
This could demonstrate an increasing disconnectedness and disinterest in mass-shootings as Americans acclimate to shootings as part of the fabric of this country.
Even with the casualties and injuries of gun violence all told in statistics, those that cannot be told are the many uncounted traumatized by mass-shootings.
Nearly 3 million children each year are estimated to have seen an act of violence carried out with a gun.
This is an underreported story that affects millions of young people, yet few solutions have been offered.

I was very wrong. “This American carnage” seems unstoppable.
Two thousand one hundred and eighty people have died since Sandy Hook.

Eight months into 2019, 63 have been killed in a public place by gun fire.
Nyack, New York almost joined this sorority of sorrow. In May, 2018, an arsenal was found in the home of a man who threatened the Summit School on North Broadway.
A friend reviewed Twitter in the aftermath of El Paso and Dayton. She compiled this inventory of unease:

My fiancé and I were standing in line at Ikea on Saturday, the night of the shooting (before learning of Dayton). I read an article on my phone that suggested it’s safer to turn-off your ringer when targeted by an active shooter, lest a spam call reveals your hiding place. With sober urgency, I relayed the information.
For a fleeting second, our mouths went dry as we scanned the floor of the Swedish furniture store in search of threats. We swallowed the bitter pill of our new reality and managed to eat our meat balls, trying as best we could to prevent fear from transforming the most mundane errand into feeling like a death-defying risk.
President Obama’s regulatory response to Newtown, that restricted access to guns for people with mental illness, was reversed by President Trump on February 28, 2017.
A month earlier, President Trump used the phrase “American carnage” in his inaugural address. He spoke of “crime and gangs and drugs” stealing “too many lives.”
“This American carnage stops right here and stops right now,” said President Trump.
According to the Washington Post, there have been 20 mass shootings since Trump took office.
Yesterday, the President finally denounced White supremacy. That was the headline. As for the guns and ammunition that White supremacists used to steal too many lives, the President was silent.
Whether we fly a banner at half-mast after each mass shooting or not, the invisible flag of death will ceremonially occupy the top of every flag pole in our nation until we have an occupant in the oval office committed to stopping “this American carnage.”
Bill Batson is an artist and writer who lives and sketches in Nyack, NY. Nyack Sketch Log: “This American Carnage” © 2019 Bill Batson. To see more, visit billbatsonarts.com