Earth Matters focuses on conservation, sustainability, recycling and healthy living. This weekly series is brought to you by Maria Luisa Boutique and Strawtown Studio and Summer Play Camp at Blue Rock School and Dying To Bloom, a natural burial boutique for humans and pets. On Sat, Apr 27 at 10:30a, join Strawtown Studio artists and explore The Four Elements featuring Earth.
If Earth Matters to you, sign up for our mailing list and get the next installment delivered right to your inbox.

In the cult-classic 1993 film The Sandlot, set in 1962, a group of suburban boys play baseball and have outdoor coming-of-age adventures almost completely free from adult supervision or micromanagement. If you’re under a certain age, you’ll wonder where the grownups are. Over that age, and you’ll recognize yourself—working things out and growing up in the secret outdoor realm of kid-dom long ago.

In the early 1960s, grade-schoolers like me were told to look both ways crossing the street and not to talk to strangers, but otherwise we were on the loose. My neighborhood gang of nine and 10 year-olds mobbed the playgrounds, or ranged far from our Bronx block on bikes or subway, miles away and out of touch from morning until the street lights came on.

So, what happened to that?

A crime changes everything

All 1980s parents, especially in New York City, had—and still have—the image of little Etan Patz burned permanently into their brains. On May 25, 1979, the six-year-old first grader begged his mom to let him walk a couple of short blocks to his school bus stop in SoHo by himself. She said yes, and somewhere on that walk he vanished. Etan’s picture, and soon pictures of other missing children, were printed on milk cartons. The day of his disappearance was designated in 1983 as National Missing Children’s Day by President Reagan. (The case only came to a conclusion with the kidnapper’s conviction in 2017.)

That one “yes” from a normal New York mom turned into a family’s nightmare with national repercussions. Media discussion of this kidnapping included speculation about sexual predation—something that was not previously part of the public conversation about “stranger danger.” This instantly changed parents’ attitudes, and the aftereffects—like “helicopter parenting” and a vast increase in adult-supervised sports and activities—are now an accepted part of our childrearing world.

Suburban America is never going back to that sandlot, or letting young kids roam out of sight and out of touch all day. Because of that reality, or maybe in spite of it, there seems to be a small but detectable new movement in reaction to all the hovering, to loosen the grip of round-the-clock adult micromanagement (apart from parking kids in front of a screen). Could a connection with the outdoors and nature, and a change in how we speak to our children, be part of the solution? 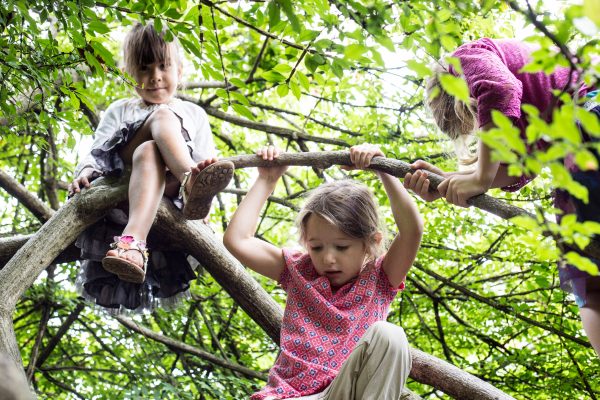 Along with new everyday “don’ts” for their kids, parents in the 1980s started to see summer programs or camps as a necessity, and not just a couple of weeks of babysitting, or country air for city dwellers. Now, parents send even preschoolers to specialized camps for sports, chess, music, pottery, and much more.

For some perspective on camp and kid independence, Earth Matters turned to Blue Rock School, a private K-8 school in West Nyack (and Earth Matters sponsor), which has run a  Summer Play Camp for about twenty years now. “It’s become a bridge between the Blue Rock School and the community, and a way to spread some of the Blue Rock philosophies of the importance of play, and respect for nature and the environment,”  camp director Katie Karpenstein said.

Karpenstein has both adult micromanagement and the overscheduled over-specialization of her charges squarely in her sights. She sees Blue Rock’s more generalist and camper-choice approach as a way to back away from “hovering” and toward more relaxed parenting. “Some parents are caught in a ‘productivity rat race’ mentality with their kids, afraid they’ll fall behind, like if they don’t go to soccer camp when they’re six, they won’t make the travel team when they’re 10.” She finds that kids really blossom being allowed to do lots of different things.“We have a little bit of everything—lots of active and creative options—and give them latitude to choose,” said Karpenstein. “This gives them a chance to discover their own interests.” 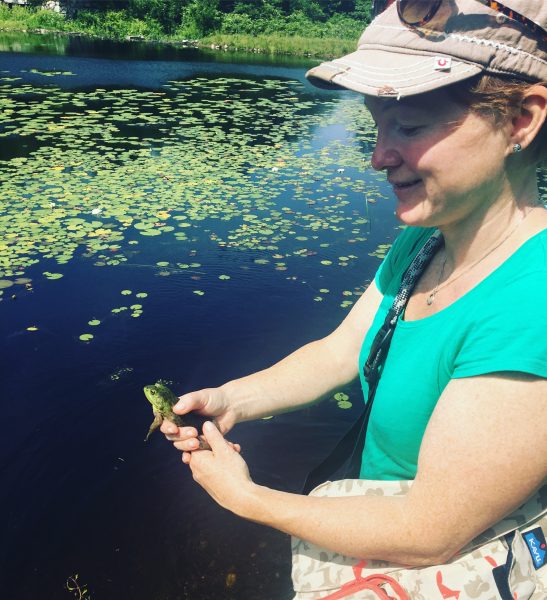 Don’t “Be Careful!” with kids outdoors

Before becoming Director of the Blue Rock summer play camp two years ago, Karpenstein was  the camp’s Excursion Director. She’s taken older camper groups on trips to Harriman State Park, where kids—including those with very little outdoor experience—catch frogs and tadpoles, jump on logs, pick wild blueberries, and get muddy. This year’s Excursion Director has a master’s degree in environmental science. “She is all about getting kids into the dirt and not afraid to poke around, turn over rocks, look at things, and try something new,” Karpenstein said. “Getting kids out into nature is one of the best ways to give them a sense of independence.”

Kids are what I call natural mystics. They’re attuned to the natural world and—given an opportunity—have deep, formative, perceptive, and loving responses to it. And what they love, they will protect. Kids who spend time in nature go on to join advocacy efforts for the natural world. There is a youth environmental movement on the rise demanding to be heard.

Led by experienced adults, the Blue Rock campers are always in sight and safe. “But on excursions, or in the woods on our campus, we want to let them take some risks,” said Karpenstein. She avoids saying “Be careful!” because “it sends the unintentional message that ‘I don’t trust you to be safe doing that’ and it doesn’t instill confidence in the child.” Camp staff are encouraged to be specific when addressing potential dangers. “If a kid has climbed a tree, and we feel they’re at an unsafe height, we might say: ‘It’s time to come down and do something else,’ instead of sending a generic message that the child is not competent to handle the situation.”

And that nervous-reflexive parental “Be careful!” is getting scrutiny from outdoor educators, as well as savvy moms and dads worried about raising risk-averse children. 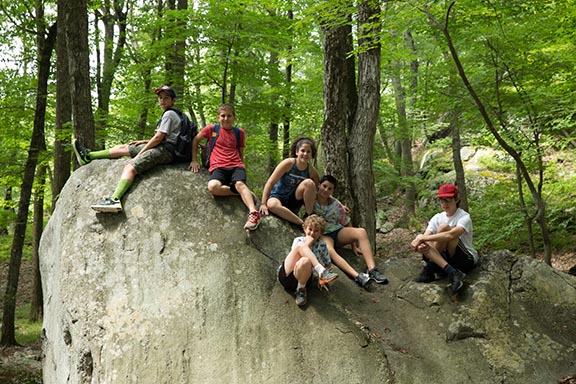 You can do it!

Karpenstein is still reflecting a love for nature and self-direction that she discovered as a child growing up in Ithaca, N. Y.  where she and her friends wandered abroad on their bikes, played in the woods, and eventually came home for dinner. “If I climbed a too tall tree, there was no one there to see it. I had to regulate myself. And I survived.”

Summer camps are tightly regulated, and Karpenstein said she is, of course, “more careful with other people’s children.” But, she added, “within that context, we start with a ‘You can do it’ attitude, we let them work things out among themselves, and we really try to let them spread their wings.”

Blue Rock School’s Summer Play Camp for ages 3 – 11 has sessions from July 1 to August 1. Find out more at summerplaycamp.org.

And check out the upcoming and ongoing environmental events and initiatives at Blue Rock School, where sustainability is front and center all year round. 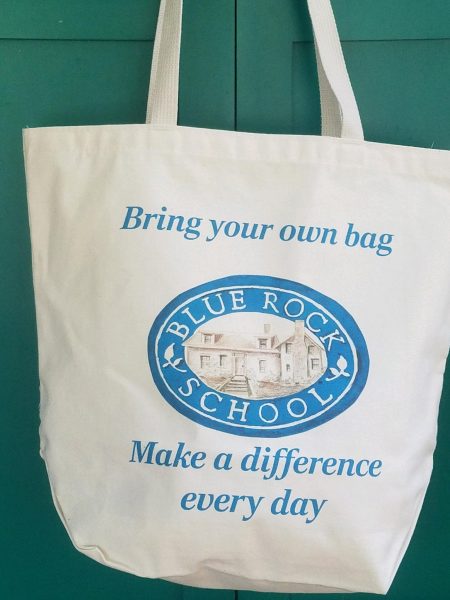 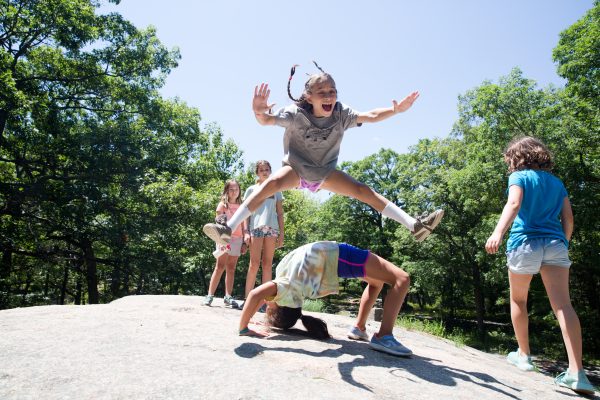