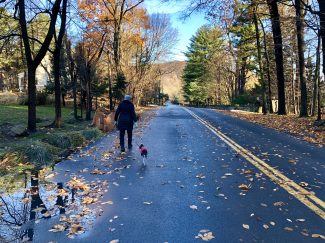 One of the charms of Upper Nyack is walking. However, now that the sunrise is before 7a, walking on N. Midland Ave. early in the morning is dangerous. Commuters, barely awake and already late, school buses lumbering down the center of the road, construction pick-ups and vans, and during snowfall, giant plows like dinosaurs, grab the precious paved real estate on North Midland. Speeding is almost encouraged on the straight half mile stretch with no stops. Dog walkers, walkers, joggers, cyclists, and school kids must compete with cars, trucks, and buses since there are no sidewalks. In some places, there is nowhere to step off the road at all–especially where there is open channel drainage by the side of the road. And what’s more, walkers will soon be heading to the new Hester Haring Cason Preserve on Midland. How is it that the road used by many villagers who live north of Old Mountain Road has no sidewalks?
The reason is buried deep in Nyack history.

Through much of the 19th century, Upper Nyack was farmland with only two roads north: the Road to Hook Mountain (now North Broadway) and Mountain Road (now Old Mountain and Christian Herald). Large farms predominated from the Hudson River to the ridge above what is now 9W, and produce was easily shipped to urban markets via river. However, the coming of the railroad opened new avenues for delivery of produce. Nyack farmers were less able to compete with more fertile farmland west of the valley. At the same time that farmers were earning less in Nyack, a post-Civil War real estate boom attracted cash-poor farmers’ attention. Resorts like the Prospect House in the hills above South Nyack appeared. River front property in Upper Nyack was purchased for large estates.

How N. Midland Avenue came to be

Into the brew of village growth and real estate speculation appears an outside name, William Magear Tweed, known to history as Boss Tweed. Tweed was the most well-known figure in an era of political corruption. Tweed found innumerable ways to manipulate the New York legislature for personal gain. One technique he used was to get a legislator to help sponsor a bill authorizing an infrastructure project that would be funded by local taxation and overseen by a Tweed-appointed set of commissioners. The political process was all back door. Money was to be made from construction and real estate speculation. 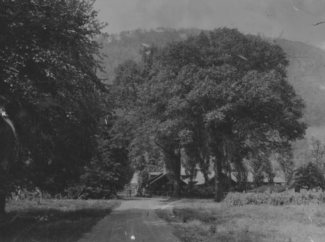 Most of Tweed’s deals focused on New York City (still then a collection of boroughs), but a Nyack venture bubbled up in early 1871 and became known locally as “the Boulevard.” Whether or not Tweed was personally involved in the scheme is an open question, but from an early point his name was attached to a group of speculators headed by Stony Point State Senator James Nelson. Nelson spearheaded legislation to build a road from New Jersey to Hook Mountain (now 9W and Tweed Boulevard) along with a second related project, Midland Avenue. One unmentioned goal of the roads was to provide transportation to a hotel and resort to be built atop Hook Mountain which would be run by a “Tweed-gang” team.

The plan to build Midland Avenue 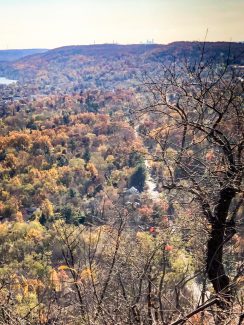 Midland Ave. from Hook Mountain with NYC in the distance. From this viewpoint, Tweed’s plan for a road to a hotel seems to make more sense despite all the obstacles.

Midland Avenue was to be built to connect Main Street in the Village of Nyack with Hook Mountain. The avenue, likes its cousin along 9W, was to be a grand boulevard: the roadbed was to be 70 feet wide, graded, paved, curbed, and guttered. Flagstone sidewalks would be added at the commissioner’s discretion. The cost of the road was to be $5,000 per mile to be paid by those who had property within 900 feet of the center of the street. If assessed taxes were not paid in 30 days, the property could be sold to pay the taxes. Some members of the local commission jumped at the business opportunity. One bought land atop Hook Mountain, another rushed to erect a stone crusher, still others purchased property along the highway at a discount.

Controversy erupts and the plan changes

Once the public found out what was afoot, many spoke out in opposition. Others backed the development. A group of concerned property owners, including Francis Tillou, a lawyer and large landholder, and George Green, son of John Green and an Upper Nyack farmer, fought the proposal. A group went to Albany to fight passage of the bill. But Nelson pushed it through.
Political environments have a way of changing quickly. Shortly after passage, Nelson was defeated for re-election through the efforts of Upper Nyack resident Garret Sarvant. Tweed was also gone by 1872. Yet the Boulevard law remained and work was started–this time with a different set of commissioners, including the two Voorhis, George Green, Garret Sarvant, and Isaac Hart. The commission amended the charter for Midland Avenue to lower costs to $3,000 per mile, added an extension to one-year for payment of assessments, and an extension of three years to build the road. The amended charter eliminated grading of the road, curbing, culverts, and SIDEWALKS. The avenue was completed by 1876.

Except for asphalt and speeding signs, Midland Avenue has hardly changed in the last 150 years. It still feels as if it were never graded; in places, the road tilts downhill and wears a center crown. It is not even very wide. No one regrets the loss of corrupt politicians like Boss Tweed, but villagers today sure wish his dream of “Boulevard” sidewalks had not died in 1872. Be careful, morning walkers

The North Broadway sidewalk in Upper Nyack is due to be completed all the way to its end at the traffic circle entering Nyack Beach State Park. The village applied for and was given a grant by the New NY Bridge Project to complete the work.

Photo credits: Mike Hays. Historical photo courtesy of the Nyack Library
Michael Hays is a 30-year resident of the Nyacks. He grew up the son of a professor and nurse in Champaign, Illinois. He has recently retired from a long career in educational publishing with Prentice-Hall and McGraw-Hill. Hays is an avid cyclist, amateur historian and photographer, gardener, and dog walker. He has enjoyed more years than he cares to count with his beautiful companion, Bernie Richey. You can follow him on Instagram as UpperNyackMike.

Nyack People & Places, a weekly series that features photos and profiles of citizens and scenes near Nyack, NY, is brought to you by HRHCare and Weld Realty.
In this article:boss tweed, Midland Ave., Nyack, Nyack History, tweed boulevard, Tweed Road, upper nyack, walking