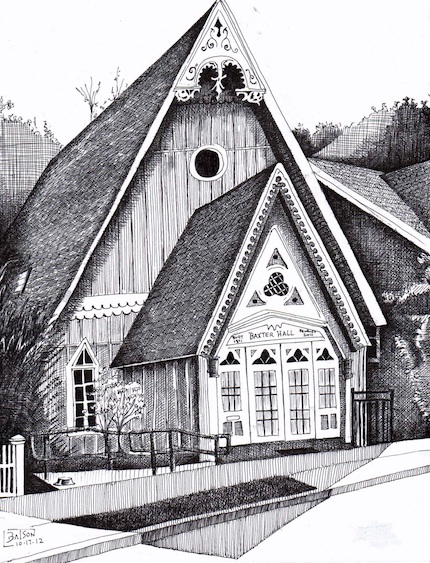 There is a fairy tale quality to the pyramid-shaped building on the east side of South Broadway near the corner of Cedar Hill Avenue. Baxter Hall is the first impression of Nyack for anyone disembarking from the bus line that originates in New York City. The Carpenter Gothic architecture announces a village that champions the arts, and the permanently placed water bowl on the curb celebrates our dog-friendly culture. This is the home of Creative Financial Planning, an enterprise started 32 years ago by Lisa Hayes and dedicated to making people’s financial dreams come true.

Hayes purchased and renovated the former church building in 2011. Erected in 1871, the address has sheltered two churches, the Universalist Church (1871-1904) and the First Church of Christ Scientist (1904 – 2010). The building is visible on the 1884 L.R. Burleigh map and listed in the legend. In order to preserve the history enshrined in the building, Hayes commissioned a report from architectural historian Hugh Goodman. 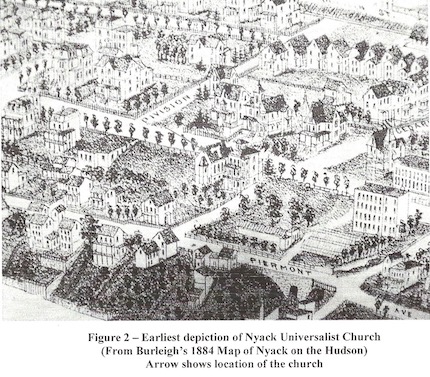 Goodman’s excellently crafted account is equally divided between spiritual and structural considerations. Adding credence to the theory that Nyack was a stop on the Underground Railroad, Goodman reports that the Universalists “vigorously opposed slavery and favored post-bellum legislation such as the Fifteenth Amendment and the Freedman’s Act to enfranchise all American citizens.” Goodman also found a connection between the Christian Science Society in Nyack, that operated a reading room in that location until 2010 and their mother church in Boston, built by the faith’s founder Mary Baker Eddy.  “From October 1903 through June 1906, the local society gave their entire building fund on three occasions to assist in the building of the church in Boston,” Goodman reported. 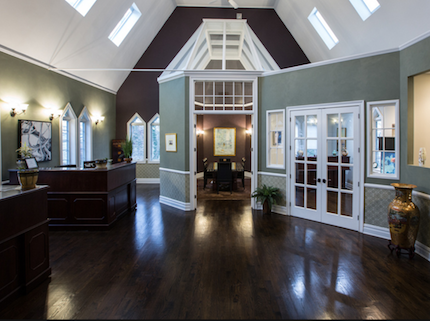 As charming as its facade may be, ultimately, it was the ethereal quality of the interior  that attracted Hayes. “I was drawn to the idea of working in a space where the windows open and I can smell the fresh air and look out and see nature.”  This fondness of the outdoors was inspired by her grandparents who bought land in Hampton Bays and where her folks built a small, beautiful home on Shinicock Bay.”

Hayes’ entrepreneurial spirit emerged in that bucolic setting. “I started cleaning houses in the Hamptons to pay back student loans after I left law school. I started a business called “Helpful Hand.” My sister and her friends pitched in. It grew to 9 employees.”

In most versions of the acronym CFP, the “C” means certified. For Hayes, creativity is the element that makes for successful financial planning and wealth management. “When I write financial plans and offer a blueprint of how the clients can achieve their goals, I incorporate creativity.” This predilection for imaginative thinking surely inspired her to acquire such an iconic building in our unique village.

Hayes was also attracted to “a community that honors diversity and caring.”  Hayes has been on the board of Nyack Hospital for six years. “For 20 years plus, I have been on the board of the Center for Safety and Change. I support the Nyack Center and I’m helping to start a local nonprofit to help young people with financial literacy.”

In a concrete example of her commitment to share her wisdom, one of her financial planners, Dan Gwizdak, joined CFP 15 years ago as a high school intern. After graduating SUNY Binghamton in 2007, Gwizdak worked side-by-side with Hayes, and under her guidance earned his CFP® certification in 2011 through Pace University. 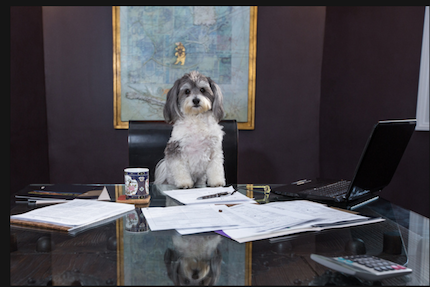 “I would like to see more equality in our society,” Hayes said. She is also concerned about the environment and supports the Nature Conservancy as well as the Cornell Lab for Ornithology.

Hayes’ embrace of equity transcends species. Not only does Baxter, her rescued AKC-registered Havanese have a building named after him, (yes, he’s the Baxter in Baxter Hall) he is a valued member of the CFP team “managing the overall vibe of Baxter Hall, working hard each day to ensure an environment that is serene, comfortable, and, above all, productive,” proclaims their website. You can follow his travails on Instagram at @BaxterMeansBusiness.

If you are a person who desires a bright economic future and wants to take control of your financial life visit Creative Financial Planning. And if you want to see a beautiful building, walk past Baxter Hall.