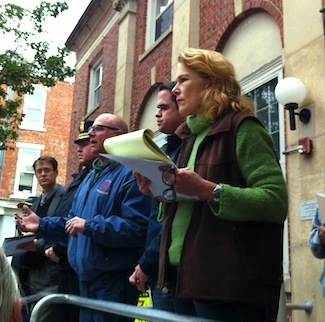 Jen Laird White retires from public office this month after serving eight years on the Nyack Village Board. A lot has changed in her six years as mayor and two years as trustee. Over the next few days, we’ll recap some of the accomplishments during her time in office. When you see her around the village (and you will !) make sure to give her a smile and a thank you! — Mayor Don Hammond
In a March, 2013 Nyack Sketch Log, then-Mayor Jen Laird White was asked what the low point of her time in office was. She responded unequivocally: Hurricane Sandy. “The devastation was stunning,” she said. “In the immediate aftermath, relief was not easy or forthcoming. During the storm and in the horrible days right after, we lost power, we sustained substantial damage as a community and we lost a life. It was a terrifically difficult time.”
While Superstorm Sandy represented Laird White’s greatest governing challenge, it was a moment she rose to meet. In the aftermath of the storm, Village Hall became a spontaneous gathering point for residents seeking information and mutual comfort and aid. Laird White convened daily public meetings in front of Village Hall.

In the days following Superstorm Sandy, Nyack Mayor Jen Laird White met with residents and business owners at 11a every day in front of Nyack Village Hall until electrical service was restored. “We are not going to have Halloween in Nyack tonight,” Laird White told a crowd of over 150 residents on Oct 31, 2012. “There are too many downed power lines. We will reschedule something fabulous in Nyack once we get back on track.”

She also took a controversial action: She instituted an alcohol ban that lasted until all street and traffic lights were restored. Local bar owners were furious. But the ban was designed to keep the town safe, and, though its impact can’t be tangibly measured, the village did get through the storm largely without incident. 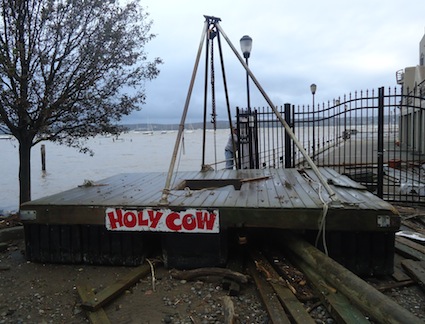 Sandy scars took years to heal. Some businesses and families still haven’t fully recovered. The Nyack waterfront and marina were devastated by the storm. Laird White’s administration responded by appealing for state relief. They got $1 million, plus insurance money. Today, the marina has been rejuvenated, and the waterfront will soon host a new restaurant.
Nyack weathered the storm, in no small part due to Jen Laird White’s leadership during the dark days without electricity after the storm smacked Nyack and Rockland County. Laird White says a lot of the credit for its recovery goes to Village Administrator Jim Politi. “It was awful. But my time with Jim during [the aftermath of Sandy] was wonderful,” she wrote in a Facebook post on 12/21/2017. According to the mayor, things were dire in the days following storm. “The village was a wreck. One of our waterfront buildings had filled up with water to the second floor, trapping residents who had decided to ride out the storm.” She said 45 boats sank and power was out in some places for 11 days. “Everywhere you went people were frightened.” The mayor says Politi was the man behind the scenes that helped The village get back on its feet. “He was truly the calm in the eye of the storm. [Jim] knew what we needed to do, he told us all how to do it and we did. This is who Jim is. He is a guy who knows how to do everything.”

Hurricane Sandy by the Numbers

8 Years of Nyack series on Nyack News And Views