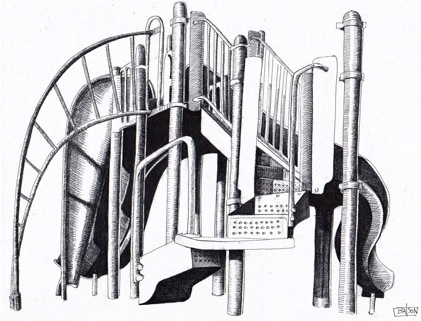 “Our board’s mantra has really become “We’re not done yet”! said Nyack Park Conservancy President Chrissy Knapp-Place.  At the end of a summer where the 12 year old non-profit saved the village’s mostly music series and won a $200,000 grant to repair a water feature in Memorial Park, Knapp-Place’s watchwords are welcome. There are still tickets for the Conservancy’s Saturday, Sept 23 fundraiser where Knapp-Place promises “some more good news to share.” 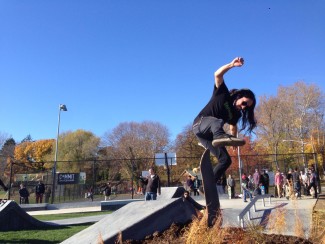 In recent years, Memorial Park has been a hive of community driven construction. In the shadow of the newly minted Mario M. Cuomo – Tappan Zee Bridge, a skate park, a viewing dock and a bench honoring an African American abolitionist spring forth from a plot of land that is being seeded with some serious civic action. But the park wasn’t always a sought -after scenic destination.
When Nyack Center Director Kim Cross and Julie Kassel came together in the early 1990s to co-chair the committee that would build the playground that has served the village for almost two decades, the waterfront had no safe place for children to play.  “There was a rotten climbing structure next to the river littered with used condoms and syringes,” Cross recalled.
The Friends of the Nyacks adopted their effort, giving them additional contacts and the non-profit status required to raise funds. After a successful negotiation with then Mayor Terry Hekker, the land where the playground is today was made available.

Cocktails On The Hudson

The Nyack Park Conservancy will hold its annual fundraiser on Sat Sept 23 from 6-8pm at 637 N. Broadway. Proceeds from this evening of cocktails, music and scenic Hudson River views will benefit the 2018 Music on the Hudson Concert series and enhancements to Memorial Park. Proceeds from a campaign to collect pennies and spare change through receptacles left in local stores, matched by Cablevision donations, got the ball rolling. A $20,000 anonymous gift in honor of songwriter Jimmy Van Heusen, the parks’ namesake, went to purchase playground equipment. Then came the sweat equity.
“Over 150 people came together to volunteer. The Nyack Fire Department dug holes for the equipment. Bobby Abramson brought his forklift and the whole playground was constructed in a weekend,” said Cross, describing a scene reminiscent of an Amish barn raising.
Memorial Park itself is a living monument to selflessness and volunteerism. The Tappan Zee Soldiers and Sailors Memorial Park Association deeded the land to the village in 1935.  Nine trees were planted around the perimeter of the park in memory of nine families whose sons were killed in World War I. This site, owned by the Depews from 1732, played an important role in the economic development of the village. Situated where the Nyack Brook meets the Hudson River, the location was ideal for docks, boat yards, quarries and later factories. It was also rumored to have been an important navigation point for African Americans seeking the Canadian boarder as they fled southern slavery.
The same factors that made the site conducive to commerce makes it a challenging spot to erect recreational equipment. Wooden or metal structures that are exposed to the elements on a riverbank are hard to maintain and require periodic replacement. With extreme weather creating stronger storms and higher tides, our park needs our constant attention. 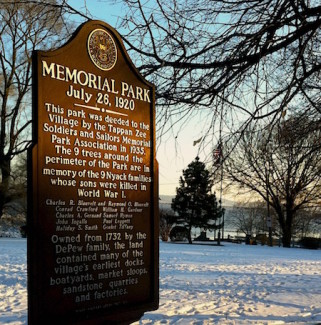 In 2004, Jen Laird White, County of Rockland Veterans Service Agency Director Jerry Donnellan,  former Nyack High School Music Director Bert Hughes, Heidi Broecking and Nancy Blaker Weber  founded the Nyack Park Conservancy.
The conservancy has raised over $500,000 for village projects including paying for the Park Summer Kids program, building the dog run in South Nyack, paying for maintenance in Memorial Park and spearheading and paying for a large portion of the waterfront master plan redesign, supported by Scenic Hudson. The first major steps of that plan were the recent removal of the tennis courts and the building of the basketball court and new baseball field. 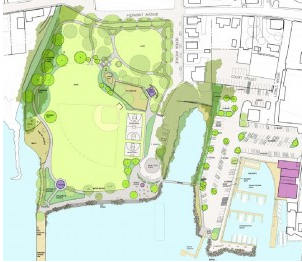 Guided by a master planning process being led by the Nyack Parks Commission, the Park Conservancy and the professional services of award-winning landscape architects Quennell Rothschild (Randalls Island, Hudson River Park), a vision for a vibrant river park emerged.
Since its creation, the NPC has raised funds that have enabled the village to create new basketball courts, a dock for rowing vessels, the new children’s playground, a butterfly garden, the Nyack skate park and a children’s summer program in Memorial Park.  The NPC also funded scholarships benefiting the Village of Nyack Recreation program and supported the work of the Toni Morrison Foundation’s Bench by the Road foundation creates a monument in the form of bench to Underground Railroad conductor Cynthia Hesdra.  The NPC, with support from Scenic Hudson, funded the Comprehensive Master Plan for Memorial Park design.
An artist and writer, Bill Batson lives in Nyack, NY. Nyack Sketch Log: “Nyack Park Conservancy”  © 2017 Bill Batson. Visit billbatsonarts.com to see more.