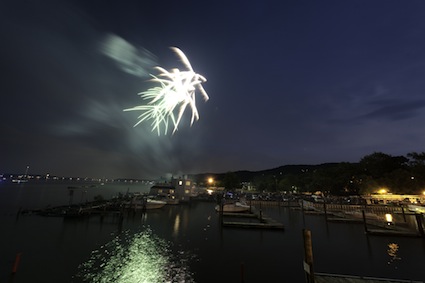 Nyack, NY — Just after Fourth of July fireworks lit up the sky in Nyack on Tuesday, police sirens provided complementary flashes of color. Around 11:15p, a fight broke out  downtown, along Artopee Way, which runs through the village’s parking lot between Cedar and South Franklin streets.
According to police, a  20-year-old Haverstraw man was stabbed above his lip and other men were injured. Though there were reports of gunshots near Depew Avenue and two bullets were recovered, it is not known whether the shooting was related to the fight.
The melee led to three arrests: a 52-year-old man on assault charges, and two 21-year-old men for disorderly conduct.
At this time it is not known what provoked the fight. But one man who witnessed the fight said that it was not gang related, telling the Rockland Times it had to do with an “old neighborhood drama.”
The village festivities were not otherwise interrupted. Orangetown Police Capt. Donald Butterworth told Lohud that there were no issues with the village’s annual July 4 fireworks.

In this article:fight, Fourth of July, hospital