It’s heat-advisory hot, and a cold drink from that drive-thru over there sounds like the answer to your sweaty prayers. If you’re lucky, maybe the plastic cup and lid are recyclable. But there’s one little bitty piece of unrecyclable plastic in your cold-drink apparatus that’s destined to fly out of the trashcan and into a nearby storm drain.

There’s no lack of news about plastic water pollution, from our local waterways to the “garbage gyres” of the Pacific Ocean. Sea creatures and birds wash up dead in alarming numbers, their stomachs filled with plastic trash they mistook for food.

Single-use plastic bags have been front and center in the fight against ocean plastic, but there’s a new culprit drawing fire—the single-use plastic straw. And we bet that you—like all of us—have mindlessly used and tossed a few lately.

English waste processing company BusinessWaste.co.uk, is calling for a five pence tax on plastic straws, similar to the tax or surcharge on those thin, single-use polyethylene bags.

In a May 17 press release, BusinessWaste spokesperson Mark Hall labeled the tens of millions of plastic drinking straws discarded at England’s pubs, bars, cafes and restaurants as a ridiculous waste.

How to combat the plastic glut? Hall proposed a return to paper straws: “Even if they end up in the general waste, they decompose quickly so it’s no great loss. We’ve got to start encouraging their greater use.”

Forgoing the straw altogether is an even better option, said Hall. But to deliver the knockout punch, he wants to treat single-use drinking straws like single-use plastic bags.“Charge 5p per plastic straw, and we’ll see their use plummet,” he said. As with Britain’s plastic bag fees, the money would go to charity.

“We’d love to see the plastic drinking straw phased out completely within the next couple of years,” Hall added. “That’s an ambitious timescale, but one that is certainly achievable.”

Here in the U.S., actor Adrian Grenier has launched his Strawless Ocean initiative to draw attention to the issue. It’s part of his Lonely Whale Foundation, created in 2015 with a mission of “bringing people closer to the world’s oceans through education and awareness, inspiring empathy and action for ocean health and the wellbeing of marine wildlife.”

On social media platforms, the anti-plastic-straw campaign uses the hashtag #StopSucking. It features videos of Grenier and others getting “sucker punched” by a tentacled sea creature while drinking from plastic straws.

The message? Americans use and immediately toss about 500 million single-use plastic drinking straws every year. In most places, including Rockland County, they aren’t accepted for recycling, so they head for landfills where they take eons to decompose. But just as often, they end up blowing out of vehicles or trashcans, or are dropped on the street or beach. Once in the ocean, these straws pollute, and are ingested by creatures, which often become crippled or die. 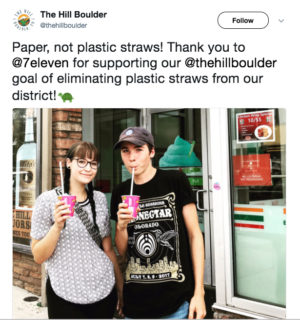 Activists get the biggest impact by convincing businesses to “switch the straw.” This post from 7/11/17 thanks a Boulder, Colorado 7 Eleven for switching to paper straws. Image courtesy @theHillBoulder via Twitter

The Strawless Ocean campaign is careful to state that they are not anti-straw, but simply anti-single use plastics. So, how do they hope to make a big change?

Individual supporters are asked to take a pledge to #StopSucking on single-use plastic drinking straws, and to spread the word on their favorite social media platforms.

But it’s the institutional users—bars, restaurants, fast food joints—where the biggest progress can be made. Strawless Ocean has “conversion kits” to help food service companies make the switch, and offers documented success stories to show the way.

If you just can’t #StopSucking

If you hit the drive-thru or stop at a café for a cold one and refuse the straw, Strawless Ocean urges you to let your beverage purveyor know why you are saying no.

But if that drink really, really needs a straw, there’s a new generation of alternatives arising: compostable paper straws, as well as a host of reusables made from glass, metal, bamboo, reed and silicone (which we use at my house). You can even carry a reusable straw in your car for those drive-thru emergencies.

And if all that seems like a little too much trouble to help save whales, fish, sea turtles and birds and, ultimately, people, just keep in mind how BusinessWaste’s Mark Hall views single-use plastic drinking straws: “They are pretty much the ultimate in human wastefulness, and a problem that can so easily be solved with very little effort.” 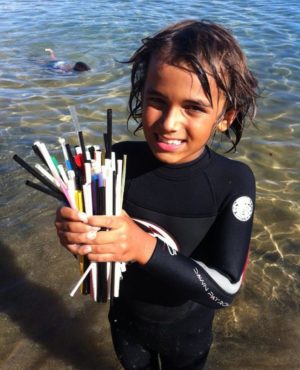