This Week in The Villages: In Orangetown, there will be a public meeting of the Architecture and Community Appearance Board of Review with the Project Sycamore Data Center on the agenda. Plastic bags may no longer be used for pickup of recyclables. And 2017 discounted theme park passes are now available.
On the river, Tappan Zee Constructors are trying out their new lighting system on the new TZB.
In Washington, Congresswoman Nita Lowey condemns President Trump’s reported decision to pull the United States out of the Paris Climate Accords. Plus a rundown of this week’s municipal and school board meetings in the Nyack river villages. 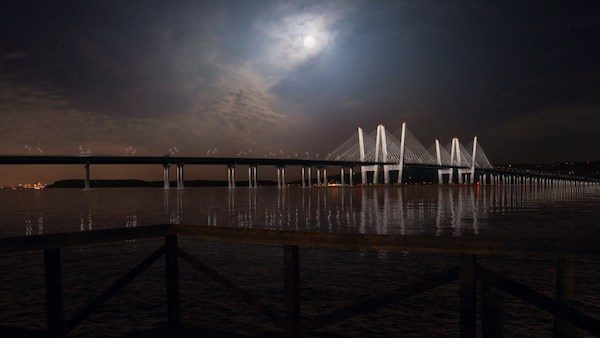 For your eyes: Last week, Tappan Zee Constructors (TZC) tested the new bridge’s aesthetic lighting system, illuminating more than 40 piers on the westbound approaches. TZC will also continue testing the westbound bridge’s roadway lighting system this week. The bridge’s lighting fixtures utilize energy efficient light-emitting diodes, or LEDs, designed with 100,000-hour lifespans. TZC will also establish connectivity for wireless diagnostics of each luminaire.
For your ears: TZC has completed installation of the concrete noise barrier panels along the New York State Thruway (I-87/I-287) in South Nyack. TZC is treating the barriers with sound-absorbing material to further reduce traffic noise in the nearby community.
Traffic stop overnight Tues AM: TZC will move a mobile crane in the median separating the Thruway’s northbound and southbound traffic lanes during the early morning hours of Tues June 6. There will be a single traffic stop at approximately 4a for about 10 minutes.

Orangetown’s Architecture and Community Appearance Board of Review (ACABOR) meets on  Thurs June 8 at 7:30p to discuss the Project Sycamore Data Center Plans. The meeting will be held in the Greenbush Auditorium, 20 S Greenbush Rd, Orangeburg.
Due to restrictions imposed by the Rockland County Solid Waste Management Authority, the pickup of recycling will no longer include plastic bags. This includes items that are placed in plastic bags such as shredded paper, etc. Shredded paper should be placed in the paper recycling bin or brown paper bags. Plastic bags can be taken to local grocery stores that accept them.
Discounted theme park tickets have arrived for the 2017 season.  There are tickets for many area theme parks including Six Flags, NJ, Hershey Park, Dorney Park Mountain Creek, and more. Discount savings start at 20% for some parks and go all the way to 45% savings for others. Tickets are good for the entire 2017 operating season. Visit Orangetown.com/groups/department/parks/ for a list of parks that are included along with the prices.

May 31 — “I strongly condemn President Trump’s reported decision to pull the United States out of the Paris Climate Accords, which would fundamentally undermine American global leadership and endanger the future of our planet.” said Lowey. “We have a moral responsibility to safeguard our planet and ensure our children and grandchildren inherit a clean, healthy future. Any alternative is unacceptable. As Ranking Member of the House Appropriations Committee, I will continue leading the fight for federal investments in renewable energy technology that will reduce greenhouse gas emissions and protect our water and air.”

Here are the municipal events in Upper, South and the Village of Nyack and Nyack Public Schools Meetings for the week of 6/5.

The Nyack School Board Meeting will be held in the Nyack High School auditorium.