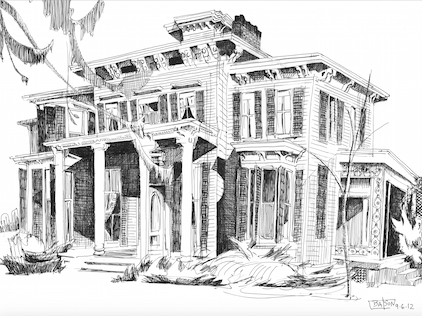 On May 13, The Historical Society of the Nyacks presents “Grand Houses of the Nyacks,” their biennial house tour. “The House Tour is a bit like stepping onto the train for Hogwarts School in a Harry Potter novel—surroundings are familiar but surprises are guaranteed,” said Mary Anne Evangelist, PhD and chair of the Society’s house tour committee.

May just happens to be Historic Preservation Month. “Many of the houses and buildings on this tour have already been recognized for their architectural and historic significance; some are listed on the New York State and National Registers of Historic Places and others have been included in historic sites surveys,” said Historical Society Trustee Jennifer Rothschild.

The tour, which takes place during Mother’s Day weekend, is also a great family outing.  There will be ten stops, ranging from an early-19th-century stone church to a magnificent Gothic Revival mansion, to lavish Victorian-era houses, as well as an example of the Dutch Colonial Revival style. 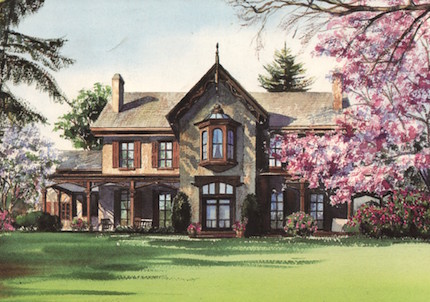 The House Tour Guidebook becomes a collectible local resource filled with beautiful watercolor renderings of each house and building by Upper Nyack artist Beverley Bozarth Colgan. Win Perry, AIA, President of the Historical Society of the Nyacks, provides a narrative for some of this year’s architectural offerings, including “The Gothic Revival Ross-Hand Mansion, with its sweeping lawn, that was once home to William (Bill) Hand who made scientific discoveries as an assistant to Thomas Edison, and later, at a laboratory on the premises of his home and Pretty Penny, where one can see where the famous actress Helen Hayes raised her children and hosted fabulous parties with her renowned playwright husband, Charles MacArthur, and where Rosie O’Donnell later sought solitude.

Win Perry can measure his Hudson Valley heritage in centuries: “My ancestors have been farmers and boat builders and were descended from the earliest European settlers in Rockland County.” As president of the Historical Society of the Nyacks for the last 18 years, Perry works tirelessly to commemorate the heritage of all the families that call the Nyacks home. 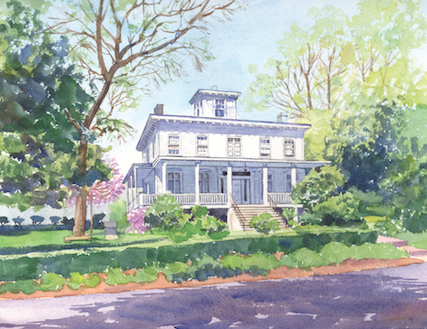 The Depew House  serves as headquarters of the Historical Society of the Nyacks. The house was built in 1854 as the home for the era’s most prominent Nyack family, the DePews, who lived here until 1916. The  Italianate mansion has a generous wraparound veranda, a bracketed cornice and a picturesque belvedere. The DePew House is currently owned by the Nyack Public Library. The lower level houses the headquarters of the Historical Society of the Nyacks.
The Historical Society’s museum currently features an exhibition entitled “Nyack Before the Malls Part II.” The exhibit will be on display Saturdays from 1-4p.  The Museum will be open throughout the day during the house tour.
As custodians of these architectural treasures, the residents of the Nyacks can not take this historic housing stock for granted. Even if you’ve enjoyed a past  biennial house tour, you don’t want to miss this one. By examining  the many homes and histories of the Nyacks, we might become more zealous defenders of our community.  If we do not, we might find ourselves reciting the lyrics from that famous Joni Mitchell song, “Don’t it always seem to go, you don’t know what you’ve got till its gone...”

Proceeds from House Tour ticket sales support the work of the Historical Society of the Nyacks. Tickets may be purchased in advance at the Nyack Public Library and online via credit card at www.nyackhistory.org. Early bird price is $40; walk-up price is $50 on the day of the tour. Your souvenir Guidebook, which acts as your ticket, may be picked up on the day of the tour, Saturday, May 13th, at the Living Christ Church, 151 South Broadway, South Nyack, starting at 9:30 a.m.

The Society’s museum is located on the lower level of the Depew House, 50 Piermont Ave. at the corner of Piermont and Hudson Avenues across from Memorial Park  (east of the Nyack Library parking lot).