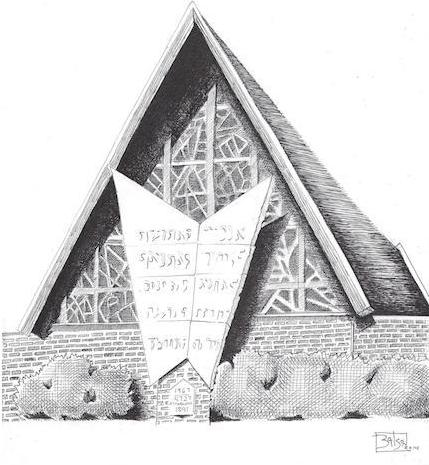 by Bill Batson
Passover, the holiday that celebrates the deliverance of the Jewish people from slavery, ends on Saturday, April 18th.  As the Congregation Sons of Israel gather as families to re-enact their exodus, the history of their synagogue might also be a topic of reflection. Thanks to a document published in 1991, a detailed and intimate account of the history of the Jewish community in Nyack has been preserved. 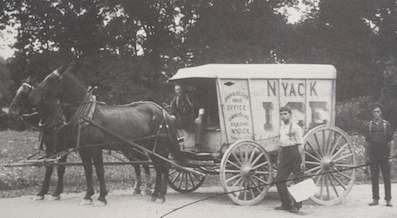 Written and edited by Myra Dembrow, “From Generation to Generation, One Hundred Years of Jewish Life in Nyack,” provides a splendid and sweeping
glimpse into the formation of  the congregation that now worships on North Broadway in Upper Nyack. Thoroughly researched and beautifully written, the centennial journal explores the evolution of the congregation and their interaction with the surrounding community from 1891 to 1991. 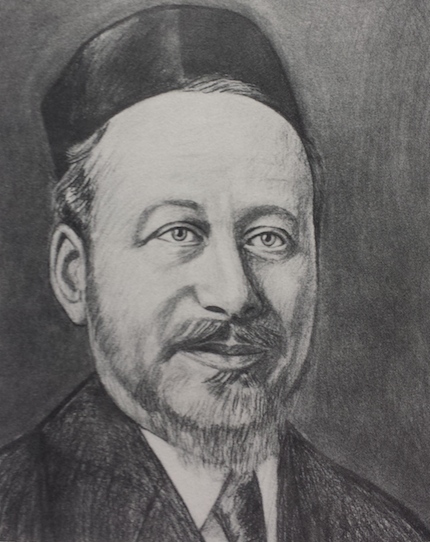 Dembrow describes the late 19th century village that attracted itinerant Jewish peddlers from New York City as “a bustling center of commerce, lying as it does at one of the Hudson River’s premier harbors and the intersection of the only two roads that completely cross Rockland County, the roads that are now known as Route 9W and Route 59.”
One of these early arrivals was founding member of Congregation Sons of Israel, Abraham Meyer Brown, who opened a tailor shop in Piermont. In March of 1870, a space in Brown’s shop, which had relocated to Main St. in Nyack because of a fire, became the meeting place for the Jewish Society of Nyack. On August 22, 1891, that group incorporated as the Congregation of Nyack, B’nai Israel. 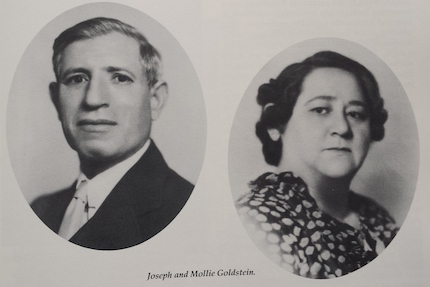 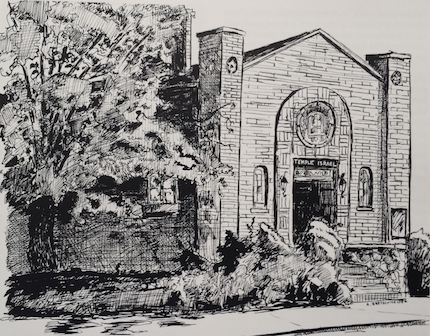 Gert Goldstein Mages recalled being the only Jewish girl at Liberty School in 1914. When prayers were read, Goldstein was sent to stand in the hall.
By 1917, the nascent congregation invited a shochet (ritual slaughterer), Hyman Schwartz, to help the community observe Kosher dietary codes. Around this time, Gert Goldstein’s parents brought a family to America that was fleeing the pogroms in Poland. The father of that family, Abraham Lehrman, was an ordained rabbi and became the first salaried spiritual leader of the Jewish community in Nyack. 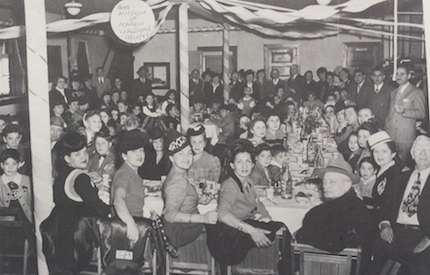 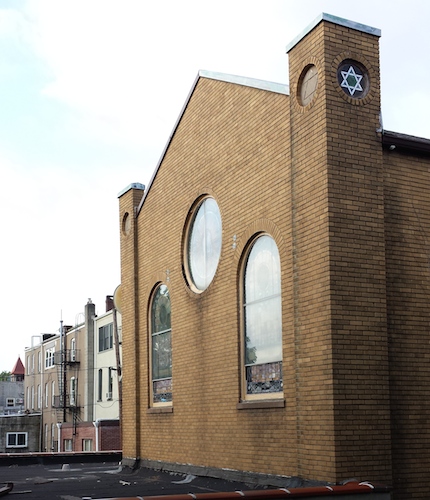 When the congregation changed their name to Sons of Israel in 1936, the Jewish community in Rockland County was still so small, congregant Charles Barracks claimed that he knew every member. The entire social and professional lives of many of the families who belonged to Congregation Sons of Israel revolved around downtown Nyack. “Everyone lived, worked and played together. There was no other social life, there didn’t need to be. The women would work all day in the family store, then spend the evenings at the synagogue, cooking, planning and meeting about one thing or another,” Kenie Mittleman remembered.
During World War II, Rockland County hosted Camp Shanks, the embarkation point for troops in route to fight in Europe. Camp Shanks did not have a Chaplain for Jewish personnel, so Jewish soldiers were brought to Nyack by truck to observe their faith. 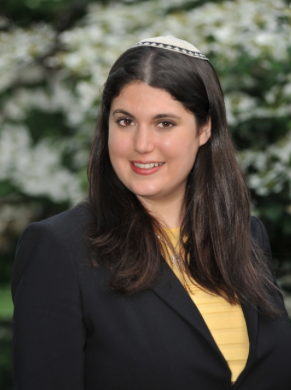 Rabbi Ariel Russo came to Congregation Sons of Israel in July, 2014.
“I love Nyack. It’s an idyllic place. There’s breathtaking natural beauty with many nearby parks for hiking and a charming downtown that has an urban feeling to it. I have been completely welcomed and embraced by the synagogue community and the community at large,” said Rabbi Russo.
Rabbi Russo shared her excitement about programs at CSI that support mothers and families. “We have a  mom-to-mom support group, run by a congregant who is a doula, social worker and perinatal specialist.”
And we also have a vibrant pre-school, Hebrew school and an adult education program with many different options for learning.”
Rabbi Russo hails from Cherry Hill, NJ. She moved to New York City for college and graduated from the Jewish Theological Seminary’s Double Degree Program at Barnard College and List College, with degrees in Psychology and Talmud.
Rabbi Russo received her rabbinic ordination, master’s degree in education, and certificate in pastoral counseling from the Jewish Theological Seminary.
When Erica Rubin became Cantor in 2019, Congregation Sons of Israel became the first all women led clergy team in a synagog in Rockland county.

The post-World War II economic boom and the construction of the Tappan Zee Bridge brought a period of growth to the region and the synagogue. The congregation now had about 100 families. This was also the moment when seeds of dissension were planted in the congregation. In 1955, traditionalists held separate Yom Kippur services at a nearby church hall. Even though the rancor died down, a fault line that would eventually become a full blown schism had emerged.
The 1960s’ were a period of social activism around issues of racial justice in America. A bond was built between Congregation Sons of Israel  and the African American community in Nyack during the 19th century. Founding members Abraham Brown and Moses Oppenheimer were active in the underground railroad in the 1860s. One hundred years later, in February 1963, 70 members of St. Philip’s AME Zion Church worshiped at CSI in a race relations sabbath. Rabbi Krantz and his congregation were invited to a service on a following Sunday at St. Philip’s by Reverend McKinney.
Like much of the country, the 1960s were a time of tumultuous change, with trends sometimes going in contradictory directions. For CSI, plans to obtain a new building reopened an old rift.
In June 1964, having outgrown their aging temple on South Broadway and Hudson Ave, CSI sold the building to Berea Seventh Day Adventist Church for $70,000. A property on North Broadway was acquired, a colonial style mansion was demolished and new construction undertaken.
By March 1965, the congregation broke in two. Here is how Temple Beth Torah, the new synagogue that was created from the breach, described the moment of separation in a document published in 1990 commemorating their 25th anniversary: “13 families gathered in a south Nyack basement to organize Nyack’s second Jewish congregation…The first Friday evening services were held in Eugene and Evelyn Levine’s basement, led by a part-time Rabbi and Cantor. Later, services were moved to the Bobin Bungalow Colony. As to a permanent home, plans were soon afoot for the purchase of a wooded track on Route 9W and the original building opened in 1966.”
Fundraising for the Congregation Sons of Israel’s new synagogue on North Broadway continued despite the balkanization. Hyman Schwartz, the shochet who had arrived in Nyack before there were any synagogues in the village was among the first donors. 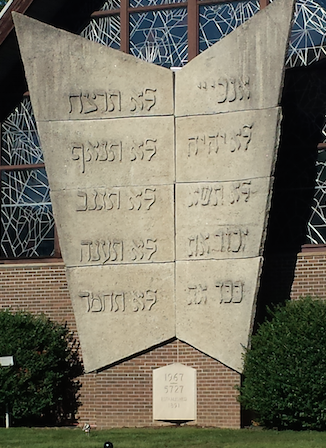 The stone sculpture that makes the Congregation Sons of Israel one of the most distinctive structures in the region was designed by Connecticut artist James Hennessy. Hennessy was commissioned to create a work of art depicting the tablets upon which the Ten Commandments were engraved. The firm of Marchese and Hamersma of Clifton, New Jersey created the massive wall that tells the story of the tribes of Israel in stain glass.
While construction was being completed, services were held in a carriage house on the property that was converted into a house of worship by congregation member and owner of Rockland County’s largest construction firm, Harry Degenshein. At noon on December 19, 1965, after a traditional Chanukah candle was lit, a motorcade brought the sacred Torah scroll from Hudson Avenue to 300 North Broadway.
In keeping with ancient tradition, a procession of elder members of the congregation carried the scrolls around the makeshift chapel seven times before placing the Torah into a ceremonial ark.