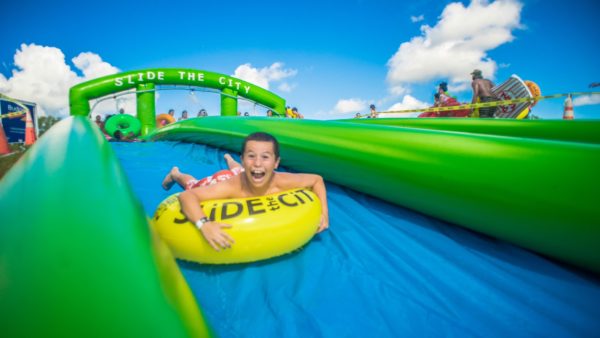 by Max Cea
In two and a half months (August 27), when the sun is setting on the summer, a 1,000-foot-long slip ‘n’ slide will be installed on Nyack’s Main Street; it will stretch from Midland Avenue to Franklin Street, and will be open to old and young.
When your excitement ceases to suppress all other activity in your brain, you may be left asking yourself, What? …Why?
“Nyack has a perfect hill.” That’s Spencer Hunn, co-founder of Slide the City, a Salt Lake City, Utah-based slip n slide company. Hunn, 36, who as a Mormon doesn’t drink, made this discovery on a trip to Pour House. “Slide the City is my side business,” he explained over the phone on Thursday. “I have an energy deregulation business, where we sell gas and electricity. When I was selling energy out in Rockland County, a friend of mine there showed me around Nyack, and they showed me the Pour House – I guess because it’s a bar that stays open later than normal. I saw the hill as we drove down Main Street and literally called my business partner in Utah and said, ‘Bro, this is the most perfect setup for the most perfect block party for Slide the City. We have to do it.’”

Hunn’s business partner was game, so Hunn sent an email to Nyack Mayor Jen Laird White, who, ironically, unbeknownst to Hunn, had messaged Slide the City months earlier. “I heard about this incredible slip ‘n’ slide going through downtown Minneapolis. I reached out to them but never heard anything back until Spencer contacted me out of the blue,” White said.
The two, plus Nyack’s recreation director, met up shortly thereafter. White was taken by Hunn’s zeal. She describes him, a former college baseball player who drives a red Ferrari, as the most enthusiastic person she’s ever met. It’s not long into our phone conversation that it becomes apparent, mostly through the unswervingly amped inflection in his voice, that even when Hunn’s not selling actual energy, he’s still selling energy.
Slide the City, after all, has held events in over 100 North American cities in the past two years. And Hunn is there at each stop, spending the morning leading the setup (820 wrestling mats, 1,000 feet of inflatable vinyl slide, 20,000 gallons of water*); spending the afternoon working the slide, and doing some sliding; spending the evening taking it all down.
The business is not yet profitable, which, according to Hunn, makes it, “the worst business venture I’ve ever done.” And his previous ventures have left him living a comfortable life. So why spend 20 hour days toiling in the heat?
“The slip ‘n’ slide was an idea that my best friend in college had. And it’s all about bringing as much fun as you could imagine to the community. There’s nothing like it. It’s sledding in the summertime. It’s a water party. It’s so many people with just smiles everywhere,” he said, readily acknowledging that he would also like the company to make a profit in the next 12 months. 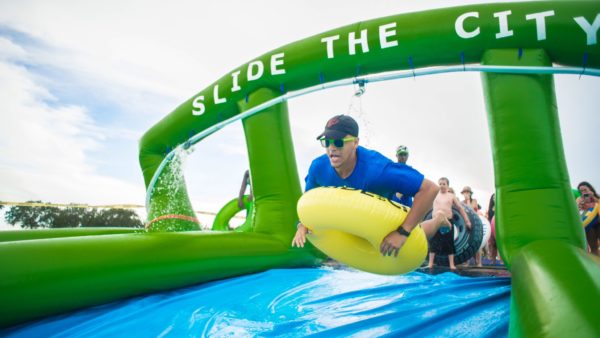 For Nyack’s part, White’s goals are multifold: fun, yes; but she also hopes that the slide will draw non-residents to the village, that it will be a small economic catalyst (other cities have brought in $20,000), and that it will bring attention from residents to the stores at the top of Main Street. “It’s a section of the village that we still haven’t figured out how to drive traffic to. So if nothing else, there will be some action packed stuff, and people will see what’s up there, see the stores,” she said.
The slide will be the main attraction, but the event itself will be a block party of sorts. Pour House and other local vendors will be selling food and drinks. DJs from 92.3 FM will play music. And Hunn is planning to reach out to Vicoria’s Secret for a sponsorship, confident that he can get their angels out to slide.
Hunn likely gets himself equally excited for each event, but the way he talks about finding Nyack and preparing makes it sound like our town will somehow be special. Which is probably a ridiculous thought because, you know, who cares what this guy’s favorite city to slip n slide in is?
Nonetheless, I ask him if any hill stands out. He says, “The best hill we’ve had so far was in the suburbs of Chicago. In Chicago I was sliding so much that I barely had energy to do the take-down. And the specs on the Chicago hill are the same as Nyack. So it’s definitely going to be really awesome.”
*The water is conserved.
Slide the City will take place on August August 27. Tickets will go on sale on June 15. All day passes will be sold at $20 for 48 hours starting June 15, after which they will be sold for $25 – $30.