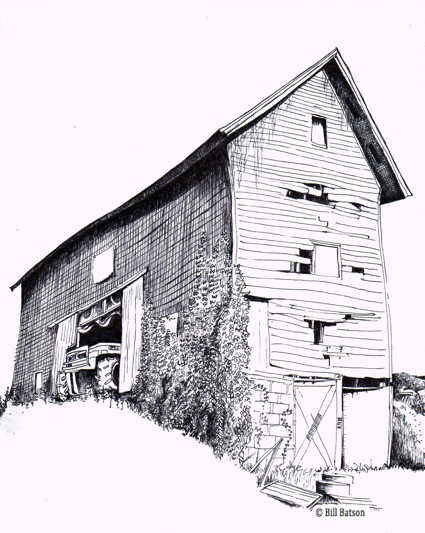 When you buy your fresh fruit and baked goods from one of the booths at Nyack’s Indoor Farmers’ Market, which starts Thursday, December 3, at the Nyack Center, you are rubbing shoulders with American history. Within the span of 300 years of family farming in Rockland County, the Concklins have witnessed the birth of this nation and its darkest hour. During the Revolutionary War, the family produced dairy products in the path of advancing armies. On 9/11, a Concklin was setting up for the farmer’s market at the World Trade Center when the Twin Towers were destroyed.  The Concklins’ story speaks volumes about the resilience of a family and the depth of the community support they enjoy.

Since Nicholas Concklin sought to have the land that he farmed named Pomona after the Roman goddess of fruitful abundance, 11 generations of Concklins have tilled the soil in Rockland County. The Orchards of Concklin is the oldest family business in New York State and the eighth oldest in the country.

Over 100 neighbors, customers and relatives gathered on July 4th, 2012 at the Orchards of Concklin at the intersection of Route 45 and South Mountain Road in Pomona to celebrate their tricentennial. Harriet Cornell, the chairwoman of the Rockland County Legislature, gave the keynote at the celebration. “People want food grown locally. The family farm offers healthy, sustainable choices to intelligent consumers,” Cornell said.  She suggested that the benefits of having active farms in the county go beyond the epicurean.  “Many want to participate in growing food and have their children learn first-hand that food comes from the earth around us and not from the supermarket.”

The bond between the Concklins and the community was deepened recently through legislative action.  Cornell was instrumental in working with the Rockland County Legislature to save the Concklins and two other local farms from being displaced by over development.

Paul Trader appeared at the Concklin’s tricentennial on behalf of an institution that was celebrating its 150th anniversary, the land grant university system of which Cornell University is the representative in New York State.  Created during the presidency of Abraham Lincoln, the system of publicly funded agricultural and technical institutions operates in every county of every state. Three generations of Concklins have graduated from Cornell.

“I first met the Concklin family in 1979 and have enjoyed working with them ever since,” Trader, who is the director of the Cornell Extension in Rockland County, told me on a recent phone interview.  “Like most farmers, they understand what sustainable farming means in today’s high-tech world. They’ve been tilling the same land for 300 years and using university research to grow healthy, delicious fruit and vegetables for their own farm stand in Pomona and almost 20 farmer’s markets in our region.”

When you shop at a farmer’s market, you are helping reverse a trend that almost eliminated the family farm.  The number of farms in the United States dropped from about seven million in the 1930s to only two million today.  And only about ¼ of these remaining farms are family owned. Rockland, once home to hundreds of farms, now has only a handful.

We need to acknowledge that saving the family farm is an act of self-preservation.  The more we become alienated from our food supply, the equilibrium of multiple systems that impact our lives is thrown off- kilter. Agricultural policy effects our health care system through rising obesity rates, our environment through destructive practices of agribusiness that threaten our top soil and the safety of our food supply, and the enormous carbon foot print left by transporting produce over thousands of miles and our economy through the loss of decent local jobs and the exorbitant prices that results from shipping food from outside our region. 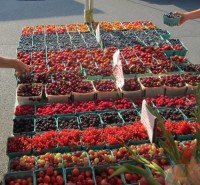 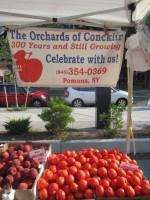 The Concklins have been actively repairing the rift between citizens and their food supply by participating in the Farmer’s Market movement from the beginning in the 1970’s. The Orchard of Concklins has been an anchor vendor at the Nyack Farmers’ market since the late 1980’s.

Managing Director Richard Concklin’s wife Ellen told me that without the farmer’s market movement, their family farm would not be viable. But I think that the opposite view is equally valid. When you consider the urgent nutritional, environmental and economic issues that are inextricably tied to our food supply, when you shop at a farmer’s market, the family you save may be your own.

The Orchards of Concklin’s farm store is located at 2 South Mountain Road in Pomona and is open daily from 8a – 6p or visit them every Thursday at the indoor farmer’s market at the Nyack Center from 8a – 2p until March 31.

If you want to dig deeper into the issue, learn more about Rockland Farm Alliance (RFA),  a broad-based coalition of farmers, community groups and activists, local and county officials and interested citizens that was formed in early 2007, with a simple mission: to preserve, create and enhance sustainable food production in Rockland County, NY.