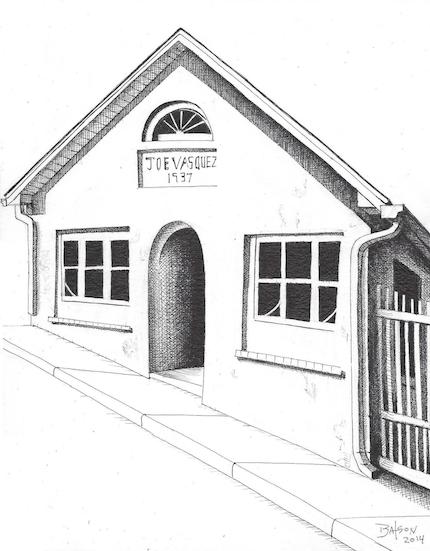 A speakeasy, jazz club, church, antiques warehouse and karate studio have called the corner of Cedar Hill Avenue and Franklin Street home. Until you do some research, you never know the eclectic, or even clandestine activities that may have taken place behind the most unassuming front door.

In 2007, Rivertown Film asked photographer and local historian Evelyn Fitzgerald to examine the lineage of the building that was at the time a warehouse for Christopher’s Antiques. Rumors of intriguing past uses,  as well as Christopher’s support for a fundraiser for the film society inspired the investigation. “I thought of the project as an opportunity to give a gift to Nyack. Knowing the history of a community 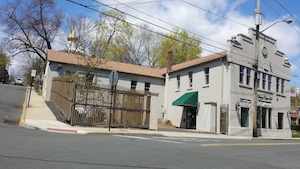 Fitzgerald traced the building as far back as 1876 and its first inhabitant, Sarah Lent. From 1914-1917, the address was the site of a saloon and boarding house run by Kate Sheeky. A confectionary and restaurant called Marsilio’s opened here in 1920, the year of the passage of the 18th Amendment that prohibited the production, distribution and sale of alcohol. Marsilio’s was suspected of being an establishment that sought to sidestep prohibition, more commonly known as a speakeasy. 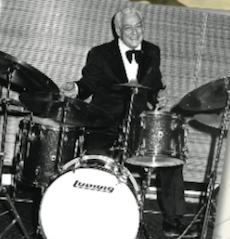 In 1932, Joe Vasquez bought the building and renamed it Palais Royal. His name is still etched in cement on the exterior facing Cedar Hill Avenue. Prohibition was repealed in 1933, but one of its  cultural traditions endured on the stage of Palais Royal; jazz. Speakeasies had served as an important incubator for a new American art form.

A decade later, in 1943, Howard “Buddy” Christian came to sit-in on drums on this stage for jazz bands that entertained soldiers from nearby Camp Shanks. A fourth generation member of a South Nyack family, Buddy performed with some of the legendary bands of the 40’s and 50’s including Red Norvo, Ina Ray Hutton’s all male band and Georgie Auld. 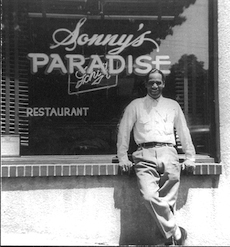 Buddy’s daughter, South Nyack Mayor Bonnie Christian, has been keeping the family beat. Like her father before her, Christian played drums in the band at Nyack High School. On weekends during high school she performed with her band Four Cats and the Kitten. Christian pursued a career in media management instead of music, but still picks up the drum sticks. “I have his drum kit set up and play from CDs for my own entertainment,” Chirstian said.

In 1945, The Palais Royal was bought by Al Foxie who changed the name to Club Rendezvous and hired Sonny Oliver, an African-American Nyack musician as manager. Buddy Christian would play there when he was in town. These sessions were significant because the groups were integrated, a practice not common in most venues at the time.

Several speakeasies were thought to have hidden behind password protected doors in Nyack. This is an example of one of four paintings discovered in the basement of 13 South Broadway, supporting the  speculation that the site was a speakeasy.

Oliver and Herman Eig bought out Foxie in 1950 and changed the name to Sonny’s Paradise. Dinah Washington and musicians from Count Basie’s band came up from New York City to perform.

Michael Angelo Roman purchased the property in the late 1950s to relocate his Burd Street plumbing business  that was condemned and demolished to make way for a parking lot during Nyack’s Urban Renewal program. Roman added 6 apartments on the upper level including Mercer’s, an African-American barbershop, and a Baptist Church rented space on the ground floor.

In the early 90s, when their inventory exceeded their floor space on South Broadway, Christopher’s acquired the building from Roman to store antiques. The warehouse and eventually Christopher’s were shuttered as the antique sector of the local economy contracted in recent years.

Today, the main building on Franklin and the annex, on Cedar Hill Avenue function as a complex of physical training programs called Nyack Fitness. The building accommodates a 24-hour gymnasium, personal training space, locker rooms, an outdoor fitness courtyard and a variety of community-based health and wellness initiatives.

The curved doorway on Cedar Hill Avenue, depicted in this week’s sketch, is the entrance to a karate dojo. When Sensei Preston Powell first saw this facade, it reminded him of one of the studios in Okinawa, Japan where his form of martial arts was invented. Powell’s To-te Ueshiro Karate Club operates seven days a week and welcomes students  young and old.

Powell, who also owns a talent agency that represents jazz musicians, was unaware of the musical legacy of the location until recently. “Knowing that the space where we improve, train and dance was a performance center totally blows my mind,” Powell said. 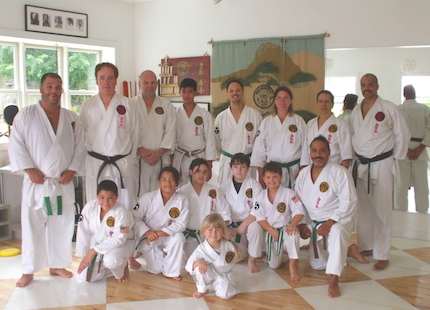 The activities that transpire in the buildings we occupy are like the layers of an archeological dig. You never know what you will find until you start excavating.

If you want to learn how familiar or foreign the lives of past occupants might be, you can follow Evelyn Fitzgerald’s lead and visit the local history room at the Nyack Library.  Many will benefit from the stories that you may unearth.