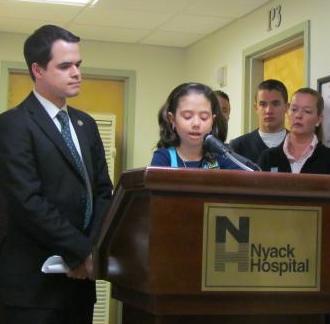 No one likes waiting in a line. For some its an annoying inconvenience. But if you are waiting for an organ transplant, it’s could be life threatening.

In the past year there have been 13,000 new organ donor registrations added in New York State thanks to Lauren’s Law,  legislation introduced by NYS Senator David Carlucci (D-Rockland/Westchester).  Beginning in Oct 2013, new New York State drivers now have to  declare if  they wish to become organ donors on their driver’s license application instead of opting out by default.

“I never want anyone to have to wait for a transplant like I did,” says Stony Point resident Lauren Shields, the organ transplant recipient for whom the law is named. Shields received a heart transplant when she was nine years old. “Working with Senator Carlucci, we have increased the amount of registered donors which will help to save lives.”

Organ donation is vital to saving lives, especially in New York, which has the third longest list of patients waiting to receive organ donations.  Statistically speaking, a New York state resident dies every 15 hours while waiting for an organ transplant to become available.

“I am incredibly proud to have been a part of Lauren’s Law and being able to get thousands of new organ donors registered in New York,” says Carlucci. “I hope more New Yorkers will show their support for those in need and become donors.”

The New York Organ Donor Network launched their Long Live NY campaign this month to enlist more New Yorkers to get registered as organ donors. Although eight out of ten New Yorkers support organ donations, only 23 percent are actually registered. Across the country, 18 people die every day while waiting for an organ transplants. Every 11 minutes another name is added to the waiting list.

“As a parent is was so difficult to watch my daughter’s health go from perfect to failing so quickly. While she lay on life support, I looked out the window many nights wondering if it would be the night that she would be saved.  Words cannot express how grateful we are to the donor’s family,”  says Jeanne Shields, Lauren’s mother.