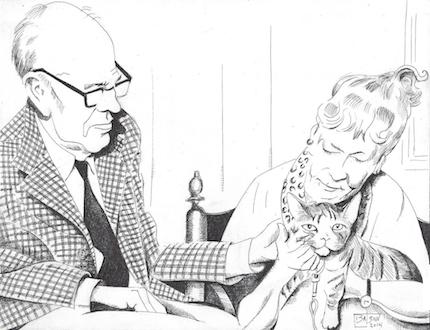 Edward Hopper and his wife Josephine Nivison and their cat Arthur 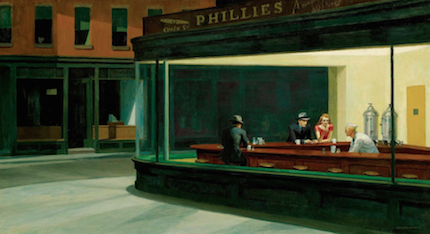 With Hopper’s childhood home converted to an arts center on North Broadway in Nyack, and his final resting place around the corner at Oak Hill cemetery, it’s time to roll out the welcome mat for the world to visit the village that nurtured the talent of our country’s favorite visual artist.

Other municipalities are seeking to mine the gold that is in the pigment of Hopper’s paintings. “Chicago is a world-class city with phenomenal cultural institutions that house iconic works of art,” said Chicago Mayor Rahm Emanuel. “I am proud that the Art Institute of Chicago…is providing 12 paintings [to the Art Everywhere outdoor exhibit] from its renowned collection, including the most popular painting ‘Nighthawks.’” If the mayor of the nation’s third largest city is dropping Edward Hopper’s name to attract tourists, maybe Nyack should stake a larger claim to our hometown hero.

A reception for Edward Hopper House Art Center Artist-in-Residence Kris Burns will be held on July 11. Her exhibit, Chasing Edward Hopper, is a selection of photographs and videos capturing Hopper Happens, her multi-media celebration of Edward Hopper’s lasting influence. In addition to images and videos of the flash mobs, pop-up projections and performances Burns staged on the streets of Nyack during Hopper Happens, she will present the entire series of original short films she created for her QR coded digital walking tour. 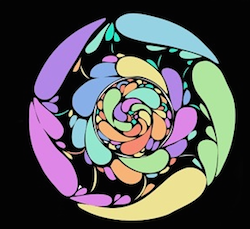 Also on Fri., July 11, from 5-8p, the Nyack Art Collective will celebrate their one year anniversary at the Edward Hopper House Art Center. “Homage to Hopper” is an evening of Hopper-inspired art, food and entertainment in the backyard of the Hopper House at 82 N. Broadway featuring High 5 Vocal Works and High Standards with special guest Sam Waymon.

Music in the Garden

As interest in the artist grows, Nyack has the backstory to meet the unquenchable thirst for Hopper.  International art pilgrims make up an increasing segment of visitors to the Edward Hopper House Art Center at 82 North Broadway, according to Hopper House Director, Victoria Hertz. “I would say 75% of our daily visitors are from outside Rockland and half of those are from outside the United States. Just last week we had visitors from Germany and Australia,” Hertz said.

This significant cultural landmark was saved from destruction in the early 1970s by an ad-hoc coalition that included neighbors, Rotarians, labor unions, students and artists. Not many causes can assemble such a vast cross section of humanity; fewer can inspire the kind of contributions that were necessary to restore a structure that was literally a few signatures away from condemnation.

Born in Nyack in 1882, Hopper graduated from Liberty when it was a k-12 school.  He lived here into the 1920s,  but would return to visit his sister, Marion, wwho occupied the house he grew up in until her death in 1965. The artist died on May 15, 1967 and his wife of over 40 years, artist Josephine Verstille Nivison, passed away a year later. The demise of this entire cohort of the Hopper family over such a short span put the future of the family home in jeopardy. After Marion’s death, the house became an abandoned eyesore inhabited by squatters.

When Jeffrey and Barbara Arnold intervened to save the house of their late neighbor Marion in 1970, a real estate investor with plans to demolish the home and build apartments had already purchased the property from the Hopper Estate. The Arnolds were able to raise $15,000 from gifts and interest free loans from concerned citizens to buy back Hopper’s house.

That was just the beginning of what local architect and Chair of the Historical Society of the Nyacks Win Perry calls the greatest and most exciting adventure of his life. Perry volunteered to coordinate the restoration project. The steady stream of individuals and organizations that answered the call to save Hopper’s house and appeared at the work site to lend a hand must have resembled an Amish barn raising. This community-based volunteer initiative preserved a tourist destination of growing national and global interest.

There are two measures of status in the art world; the price an artist’s paintings fetch at auction and attendance at major exhibitions.In both arenas, Edward Hopper is an enduring heavy weight cultural champion: 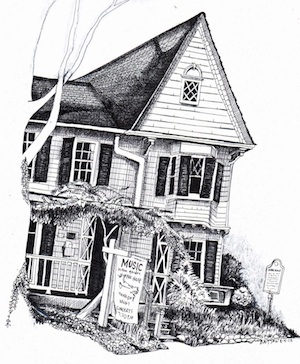 The benefits of co-branding the Village of Nyack and one of the most popular painters on the planet, Edward Hopper, are compelling. Many towns have scenic views of the Hudson River, are convenient to transportation routes and have quaint downtowns that tempt travelers and tourists alike to stop to spend some time and money. But only Nyack has Edward Hopper.

Hopper’s legacy is an asset that continues to rise in value.  Three cheers for the artist whose talent is a gift that keeps on giving: Hip Hopper Hooray!

The 58 works of art that were selected by the public in the Art Everywhere U.S. survey will “pop-up” on billboards, bus shelters and subway platforms around the country starting August 4.