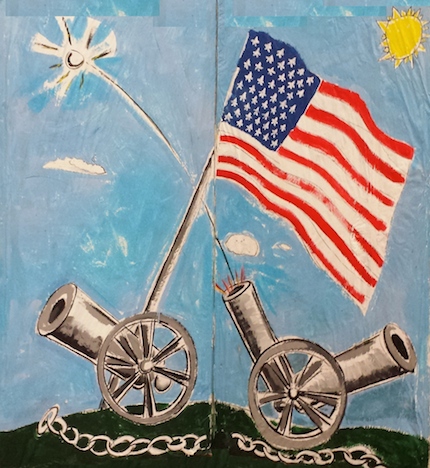 Last May, I became an insta-parent. One day I was childless, and the next, I was the parent of a fourth grader. With no handbook, or on-the-job-training, valuable time during these crucial developmental years may have been lost. However, from the moment our child stepped foot into Liberty Elementary School, the arc of her educational progress shot up like a rocket.

Evidence of Janae’s strong academic performance covers our refrigerator, where any test that she scores an A is displayed. We are running out of magnets and door space. The list of people we have to thank, including the principal, teachers and support staff would consume the 750 (or so) words I allow myself each week. So I’ve chosen to focus on just one component of Liberty’s excellent educational program; music. 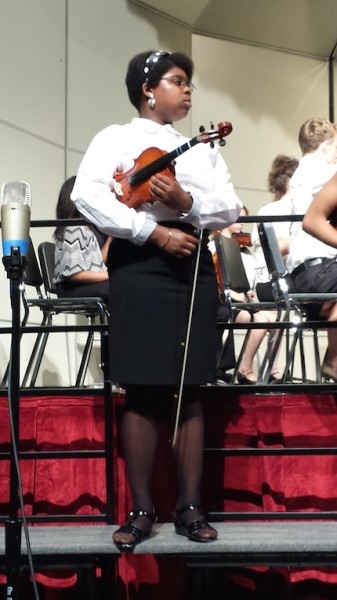 Janae Peterson with eyes glued on her conductor, Ann Winze at the Spring Concert.

Music is in Janae’s DNA. We witnessed that the first time she touched a keyboard. Her fingers were searching for chords, not simply pecking at notes. At eight years old, she joined the choir at Pilgrim Baptist Church.

Elaine Philhower, the music teacher at Liberty with two decades of experience, saw her talent right away.  “You could tell that she enjoyed singing. In third grade, when she came to Liberty, she started to play the drum kit. In fourth grade, she began violin. Now, she has moved onto the piano and has taught herself “We Shall Overcome.”  (As much as music has given her confidence in the classroom, Philhower credits Janae’s academic achievement to her homeroom teacher for the last three years, Patricia Crafts.) 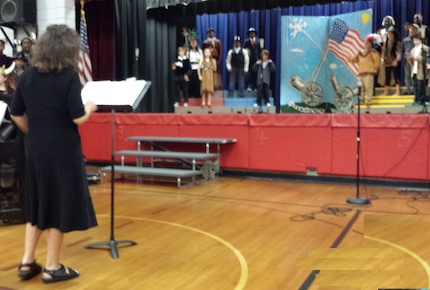 “I’ve been teaching in Nyack since 1993, and music in the elementary schools has always been a strong component of the overall school program,” Philhower said. “There have been many strong elementary music teachers throughout the years. Judy Thomas taught at Upper Nyack for over 30 years, and she is internationally known as a leader in music education. She has been published and teaches in universities around the country. She was one of my mentors. Dru Pluhowski, our high school vocal teacher, student taught with Judy,” she continued.

The current principal of Liberty, Ellen Rechenberger, taught at the school as a kindergarten teacher for eight years. She became principal of the 444 student elementary school in 2007.

Most of this timeline was constructed from notes created by John J. Lavaglio Jr..

As soon as Janae showed an interest in music, an escalator of opportunity appeared in front of her.  She was asked to be a helper in the music room for younger students. Then, she was encouraged to attend the district’s summer music camp at Nyack High School. Now, she has received a scholarship for private violin lessons.

“We had a very strong chairperson, Dr. Doug Bish, who took over as Music Department chair around 11 years ago, who also had very high standards, and then Christine Gero joined us as the high school orchestra teacher, who was also very demanding,” Philhower recounts.

Currently, Janae’s string teacher is Ann Winze. Matt Lucero, who has moved on to be the Orchestra Director at Nyack High School, was instrumental in getting Janae a slot in the orchestral program. Janae’s violin instructor is Anna Silarski, a student in the Master in Music Education program at New York University and a graduate of the Nyack music program. 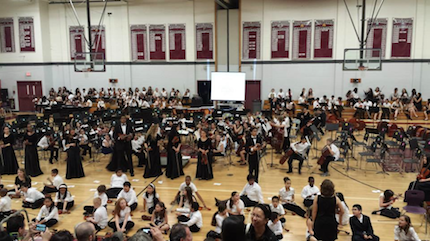 This year, taking the stage has become a major part of Janae’s music education. This spring she participated in three major productions. In her school play, The American Dream, directed by Philhower, Janae had a speaking role as Harriet Tubman, she also sang and had a solo. Janae, one of her classmates and I created the backdrop for the play that serves as this week’s illustration.

At the annual Spring Concert, Janae performed on violin in three numbers, but the highlight of each year’s music season in Nyack is the Jimerson String Festival, which was held on May 18.

MusicWorks is a works committee of the non-profit Arts Angels, supporting music within the Nyack schools.

The Nyack High School Jazz Band will kick off the mostly music jazz festival in Memorial Park on June 24th.

For the tenth annual program, Claudette Jimerson, who now serves as the President of the Board of Education, was seated in the front row. Hundreds of string students were conducted by Matt Lucero, Kristen Johnson and Ann Winze to a packed gymnasium at Nyack High School. The musicianship was exceptional.  Aaron Copland’s complex composition Hoe Down was made to look like child’s play by the High School Chamber Orchestra. Janae played with her elementary school peers, and then with the district’s string students in a piece called Tap Roots.

The dedication of a group of extraordinary parents was also on display at the festival. The recently appointed chair of the music department for the Nyack Public Schools, Joseph S. Piccirillo, asked for parents to stand who had attended all ten Jimerson String Festivals and the number that rose was substantial.  Organized as MusicWorks, district parents reach impressive fundraising goals to support Nyack’s music program.

This March, the work of students, parents, teachers and administrators was recognized nationally. The National Association of Music Merchants (NAMM) Foundation designated Nyack as one of the  376 best school districts for music education. There are 13,588  school districts in America.

Next week, Janae will graduate from Liberty Elementary School. In August, she’ll attend music camp and then join the sixth grade at Nyack Middle School.  We’ll always remember that the first chapter in Janae’s success story had a sound track. And even if music is not her ultimate calling, the rehearsal that she got at Liberty Elementary School has prepared her to perform in front of any audience life might assemble.

Special thanks to the active parents of Liberty Elementary School. Nyack Liberty PTA is invested in the success of every student and provides support for a magnificent staff.