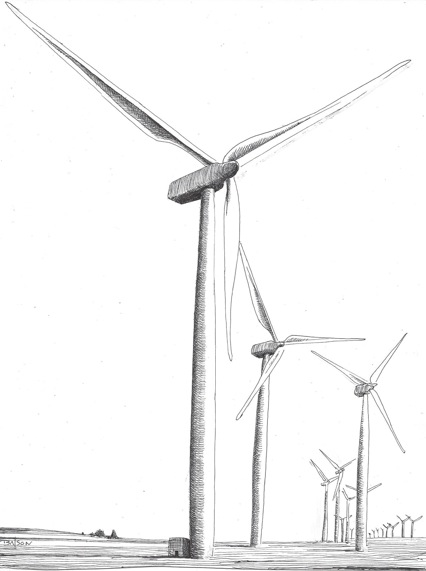 “Most people are concerned that the problems of the environment and climate change are too big to handle,” observes Scott Weissman of Green Mountain Energy. For those who visit the renewable energy company’s booth at the Nyack Farmers’ Market, Scott supplies a more hopeful perspective. “There is something that everyone can do to make a difference,” Weissman suggests. The solution Scott represents is harvested on a wind farm in Texas.

Green Mountain Energy was founded in 1997 and is headquartered in Austin, Texas. The renewable energy company has been a presence at the Nyack Farmers’ market since the spring of 2012. “Nyack is one of our favorite communities in our region that extends from south of the Tappan Zee Bridge, north of Albany and all the way to Pennsylvania,” Weissman said. The booth is a site for selling renewable energy and dispensing  energy education. “I am always surprised how many people do not know that they have some control over where their electricity comes from.” 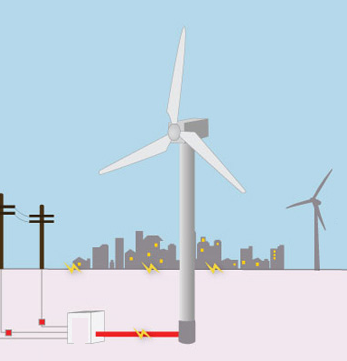 In the 16 years since Green Mountain Energy first offered power produced primarily by wind, they report keeping 24.5 billion pounds of carbon dioxide (CO2) emissions out of the atmosphere. Carbon dioxide is the primary greenhouse gas that contributes to climate change and extreme weather. CO2  is released by burning of carbon-based fuels.

By choosing renewable energy, Green Mountain’s customers have avoided the production of as much CO2 as:

Unlike carbon-based fossil fuel (like coal and gas), wind power produces no emissions. It is also an abundant and renewable energy source.

The wind was harnessed by ancient civilizations to grind grain, pump water and power transportation. Modern wind turbines can be as tall as a 20-story building, with blades as long as a football field. Constructed in rows, these “wind farms” are an increasingly familiar feature on the American landscape. According to the Energy Information Administration (EIA), the top five wind power producing states are Texas, Iowa, California, Minnesota and Washington.

model when the Empire State Building signed up in 2011.

Over the life of its four-year contract with Green Mountain, the Empire State Building is projected to avoid an estimated 239.4 million pounds of CO2. That’s like:

It would take all of the trees in Central Park 170 years to absorb the same amount of CO2.

In order to model the renewable energy philosophy that they espouse, Green Mountain operates with a zero carbon footprint. Their Austin, TX headquarters are the first LEED Platinum office space in their city. Leadership in Energy and Environmental Design (LEED) ratings are made by the U.S. Green Building Council (USGBC).

As a company, Green Mountain Energy seeks to change the way that power is made, but they also leverage the altruistic energy of their customers to provide clean power to worthy causes. 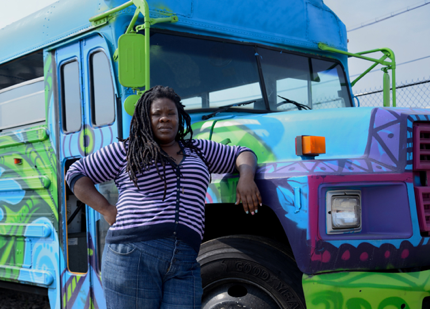 Through their “Sun Club,” Green Mountain Energy and their employees and customers contribute funds to socially responsible non-profits for renewable energy installations. Since 2002, they have installed more than 600 kilowatts of solar power through more than 55 projects. Local programs that have benefited include GrowNYC, Greyston Foundation Bakery in Yonkers and the BLK ProjeK. Green Mountain’s donation to BLK Projeck, a women of color led organization that harnesses the power of the local, good food movement, funded the installation of a solar array on the top of a vegetable-powered rolling farmer’s market. Information can be found on the Sun Club donation page.  Non-profits can apply through June 15, 2014, for donations in 2015. 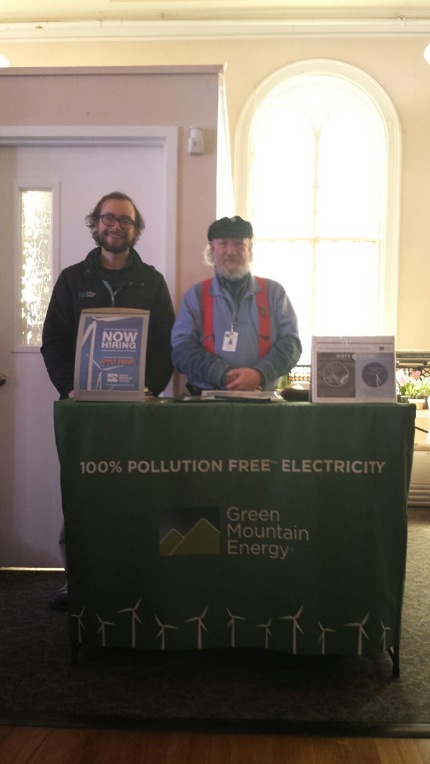 For the consumer, the transition to Green Mountain Energy is described as seamless. After you sign up, you continue to receive your power from your current energy provider. Your house is not wired to a wind turbine. The avoided pollution occurs when the amount of wind power that you have purchased is added to the power grid that supplies your utility, replacing a carbon-based source.

Green Mountain has become a fixture at the Farmers’ Market. One member of their sales team, Jesse Frayne, a gifted folk singer, is a frequent performer. Last month, Green Mountain moved to expand their presence here in Nyack, becoming one of the first businesses to sign on as a sponsor of the new Saturday Farmers’ Market coming in June.

Like any business, the real power that fuels Green Mountain comes from energetic human beings. Green Mountain always has an employment notice on display at their booth. “We want to hire people who are passionate about saving the world and want to make some money while doing it,” Weissman said.

If you want to explore renewable energy, employment opportunities, or to nominate a non-profit to get solar panels installed, stop by and see Jesse, Scott or Sherry at the Green Mountain booth at the Indoor Farmers’ Market.

Nyack’s Farmers’ Market is open every Thursday from 8a -2p  at the Nyack Center until March 27. Starting in April, the Market returns to the Main Municipal Parking Lot. In June, the Market will operate on Thursdays and Saturdays.