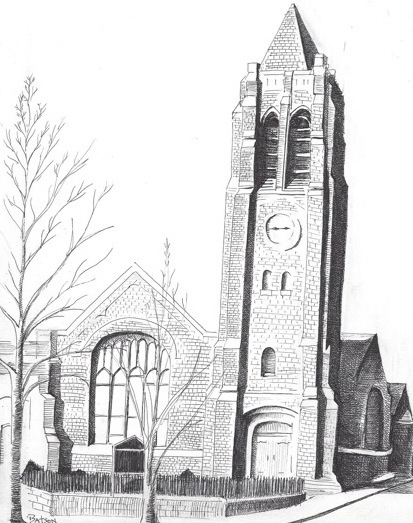 by Bill Batson America was only eight Presidents old when the First Reformed Church incorporated in Nyack in 1838. But, the congregation has more than just 175 years of worship at the corner of Burd Street and South Broadway to celebrate in 2013.  A new pastor, Dr. Fred Arzola, was commissioned in May, bringing a vigorous spiritual and intellectual presence to the oldest church in continuous service in the Village of Nyack. Early followers of the Dutch Reformed faith in Nyack had to travel to the Clarkstown Reformed Church on Strawtown Road, founded in 1795, for services. But distance and terrain made the early 19th century pilgrimage a challenging one. According to Nyack Library Local History Librarian and First Reformed congregant Brian Jennings, the advent of the Suffern Turnpike in 1830 made the trek across the West Nyack swamp only slightly less onerous. 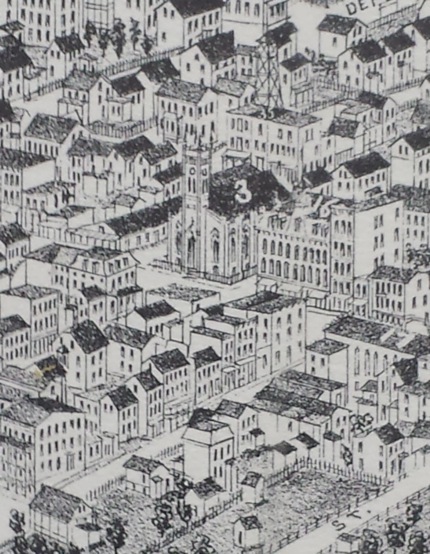 First Reformed Church is designated #3 in this 1884 map drawn by L.R, Burleigh

On April 24, 1838, the Classis of Paramus approved the First Reformed Church of Nyack. The Classis is the governing body of the Reformed Church that was also responsible for creating what would become Rutgers University in New Brunswick, NJ in 1766. Founding officers of the First Reformed Church of Nyack were drawn from a group of men who were transforming Nyack from a collection of homes to a mini-metropolis: including Tunis and Peter Smith, Abram A. Tallman and Cornelius C. Blauvelt. In 1851 and again in 1871 the building grew to accommodate a growing congregation. In 1901, a new church, featuring the bell and clock tower that is now a fixtures of the Nyack skyline, were erected. The building was designed by the Emery Brothers, the architects responsible for the YMCA, the original Nyack Library, and  St. Ann’s Catholic Church, projects that all share a Romanesque revival style. 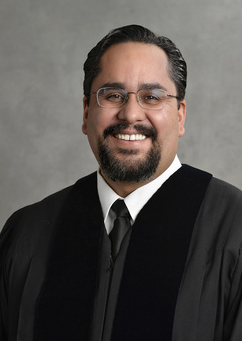 “Historically, the church has quietly been a spiritual and social anchor in the community throughout its 175 years, “ said new Pastor, Dr. Fred Arzola in a recent interview.  “Two core values that are important to us now, reflect the tradition of this congregation: Gracious Hospitality and Community Partnerships. Those two values are on prominent display in the First Reformed Church’s support for Soup Angels. “Soup Angels is a non-sectarian program which provides free, homemade nutritious dinners to anyone who walks through the doors on Mondays and Wednesdays. The success – both wonderfully and sadly – is that it meets a very basic human need, food. We can all identify with this. First Reformed Church is honored to provide the space and support this important work.” Dr. Arzola said. Dr. Arzola is the Dean of Arts & Sciences at Nyack College, obtaining his Ph.D. in Religious Education from Fordham University. Prior to Nyack College, he served in various leadership roles in several churches and faith-based institutions, including Director of Christians Education and Director of Spiritual Formation. Pastor Fred has been a substance-abuse counselor for five years and has over 20 years of youth related experience. “I lived all my life in New York City until my wife, Jill, and I moved to the Village of Nyack in 2010.  Jill also works at Nyack College. My daughter, Nicole, is a nursing student at Pace University. Being raised in The Bronx, I was baptized a Yankees fan! I love internet radio stations. And while my music taste is eclectic, recently, I tend to be drawn to contemporary folk/alt-country/classic rock music.”

Soup Angels’ eighth “Come to the Table” Thanksgiving meal is November 27th. Anyone who needs a meal will be welcomed a delicious turkey dinner with all of the trimmings.  This feast is made possible through the generous assistance of our community This Thanksgiving, the not-for-profit, non-sectarian soup kitchen has received requests from Rockland County community organizations for 2000 meals  in addition to the 300 sit-down dinners we serve the same day. This represents a 700-meal increase over last year.  For over seven years, the all-volunteer Soup Angels soup kitchen has served nutritious, hot meals every Monday and Wednesday in Nyack from 5:30 to 6:30, no questions asked.  The group has never missed a meal, including during Hurricane Sandy, where our meals  were provided out of Nyack’s Village Hall and fed both the needy and first-responders who were on call during that challenging time. If you want to be “thankful” and “giving” this turkey day, help give someone the kind of holiday meal that many of us take for granted. Donations in any amount are fully tax deductible and may be made via Paypal at Soup Angels or by check payable to Soup Angels FRC, PO Box 565, Nyack NY 10960.

The social welfare work of the Soup Angels is not the only way that the First Reformed Church engages with the community. Pastor Arzola describes his church as rich in musical talent, starting with their Music Director, James Rensink. On Sunday, November 17 at 4:00pm, Jeremy Wall, founding member of Spyro Gyra, hosted “Spirit in Music” an afternoon of music based on spiritual themes and original works at the church.  On Sunday, December 8 at 10:30a, the church will host a Christmas Brass Worship Service.” “We plan on more intentionally promoting our music ministry and hosting musical events. We also plan on nurturing more community partnerships and increasing our services to the poor and needy.” Pastor Fred is the 18th spiritual leader of this historic Hudson Valley institution. His credentials and conviviality must be great comfort to the congregation, portending the extension of their longevity. But in a time when government aid has contracted and human need has increased many will benefit from the cultural and community programs that are an enduring part of the mission of First Reformed Church, a tradition that Pastor Fred is determined to secure and nurture.

There is an exhibit in honor of the First Reformed Church’s 175th anniversary at the Nyack Library in the display cases in the Carnegie-Farian Room for the month of November.

This week’s sketch was based on an image  from the Hudson Valley Heritage. See also: