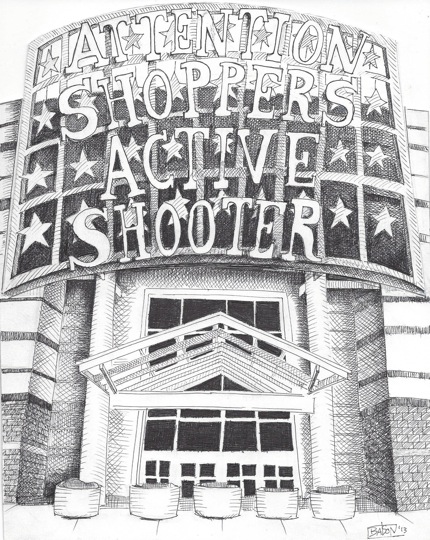 Only providence kept the death toll low in the Garden State Plaza Mall shooting on Monday, November 4, 2013. The gunman had many targets, but chose to take only his own life. No security measure or piece of public policy kept anyone safe that day. With government abdicating any responsibility as these active shooter incidents proliferate, we seem to be at the mercy of mad men with guns.

The active shooter event at the Paramus, New Jersey mall was certainly less lethal than other recent shootings, like the September 16, 2013 attack at the Navy Yard in Washington, DC where 12 people died. However, my reaction to the local episode was visceral.

What is an “active shooter?”

According to the U.S Department of Homeland Security, an “active shooter” is “an individual actively engaged in killing or attempting to kill people in a confined and populated area; in most cases, active shooters use firearm[s] and there is no pattern or method to their selection of victims.”

*There were more active shooter incidents during this period.  I have only listed shootings that resulted in four or more fatalities, which is the FBI definition of mass murder.

I grew up in Teaneck, New Jersey, the town where the Garden State Plaza Mall shooter, Richard Shoop, lived. The complex of buildings that he shot up was the first shopping mall I ever roamed. Aaron Alexis, the Washington Navy Yard killer lived in Brooklyn, another one of my haunts. The neighborhoods that shaped me also spawn active shooters.

The Jersey incident, and the wall-to-wall media coverage that followed, was unnerving. A friend tells me he called the store manager in a regional mall where his daughter works to make sure they had their lock down procedures in place. This holiday season, shoppers must keep an eye out for shooters as well as sales.

In the last 18 months there have been multiple fatality active shooter incidents at a movie theater, a public school, and a well-guarded military facility. Many thought that the slaughter of children at Sandy Hook Elementary School in Connecticut demonstrated the need for new national gun safety legislation. Our Congress saw no necessity to act.

In Colorado, on September 10, 2013, two Democratic state legislators that did act lost their seats in recall campaigns. They were targeted for supporting new gun safety laws.  The measures, signed into law four months before the recall, were enacted in response to the movie theater mass shooting in Aurora, Colorado on July 20, 2012, that took 12 lives and injured 70. The successful recall election, that drew national support from gun-rights activists, was meant to be a shot across the bow for any public official who is contemplating gun reform.

In April, a week after the United States Senate failed to pass watered down post-Sandy Hook federal gun control legislation, Borbidge said with pride and confidence on John Stewart’s Daily Show that in sacrificing his job, he saved lives. In the 18 years leading up to Austrailia’s sweeping gun reforms, there were 13 mass shootings (defined as more than four fatalities). Since the reforms, in the last 17 years, there have been no gun massacres in Australia.

The only appropriate commemoration for the one year anniversary of Sandy Hook this December 14, would have been the signing of gun safety legislation. It seems that in America, many Members of Congress are more concerned with job security than public safety.  It’s hard to imagine the scale of carnage that will need to occur for our nation’s political leadership to act.

If the greatest minds of our democracy cannot explain and reverse this epidemic of senseless violence, then we need to drop the pretense of being an advanced civilization and a morally superior nation.