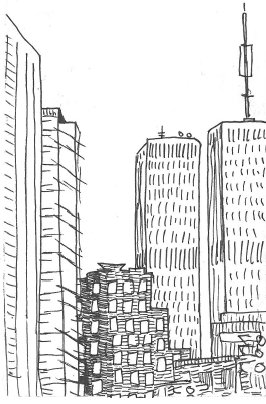 On 9/11, I think of my friend John Perry. He was a New York City beat cop who was also active in the American Civil Liberties Union. Yes, he was a rare bird. Not sufficiently fulfilled by police work, he completed law school, passed the bar and accepted a position at a law firm. He went to One Police Plaza on September 11, 2001 to hand in his badge and shield and start his life as a lawyer.

I waved goodbye to John at around 7a on the morning of the attack as he descended the stairs at the 72nd street IRT. We were working on a political campaign together and had been up since 5a  hanging campaign posters. I walked away from the train station, enjoying the crisp almost autumn air and thinking “what a perfect day for an election and for John to end one career and start another.”

John was a star volunteer on the campaign I was managing: Norman Siegel for New York City Public Advocate. Our headquarters was in a store front on 72nd Street between Broadway and Columbus Avenues.

As the planes struck the towers of the World Trade Center, you could hear the cell phone of almost every person walking down the street ring simultaneously, as news of what happened traveled by word of mouth. A crowd formed in front of the hardware store next to our office. People watched in stunned silence as the smoke billowed skyward from the South Tower on TV sets displayed in their window. Others walked to the corner of Broadway to see the actual plume rising from the carnage with their own eyes. I thought to myself, “John is down there, trying to save lives.”

Supervisor Andy Stewart will lead a program that includes the Orangetown Color Guard, music from the Pearl River High School Glee Club and singer/song writer Joe Durso, a poem by Rockland County Poet Laureate Dan Masterson and the Reading of Names of Rockland County Victims by:

The 9/11 Memorial Garden is a place of quiet reflection, dedicated to those who perished and to honor all who serve and keep our nation safe. The central design element is Eric David Laxman’s Inspiring sculpture, “Spirit Rising.”

According to eyewitnesses, John saw the first plane hit while he was leaving One Police Plaza. He was seen buying an NYPD tee-shirt from a street vendor. He needed the shirt because he had just given up his badge, but that didn’t stop him from being a cop and doing his job on the day he was needed most. Later, he was seen racing into the towers. He was never seen alive again.

His mother started calling the campaign office around 9:30a. I think I still have several of the phone message slips that campaign volunteers used to record her pleas. She wanted to know if we had seen her son. When I told her that I had seen him heading downtown before the attack, she fell silent. We both knew.

About an hour after the first tower collapsed, a steady stream of men and women, all painted gray from pulverized concrete, with tears cutting paths through their dust covered faces, marched past our store front. They walked aimlessly, like refugees. Some people who lived to the south, in Brooklyn, marched north, driven by fear and confusion.

The Board of Elections cancelled balloting. We comforted each other and some of the wandering masses. News of the Pentagon attack caused a feeling a dread. Were there more passenger plane missiles heading our way? Yet the enormity of it all left us numb, not panicked.

We couldn’t send any campaign staff or volunteers home because the bridges and tunnels were closed, so we sheltered in place. Under a sky so cloudless it mocked us, we thought about the man who had walked away that morning and would never come back; a man who was in the end, what he always was: the best of us.

This sketch log was originally published on September 11, 2011 for the ten year anniversary of the attack.

Of the thousands of pages of sketch pads that I filled while living in New York City for decades, this 2″ x 4″ image is my only drawing of the World Trade Center.