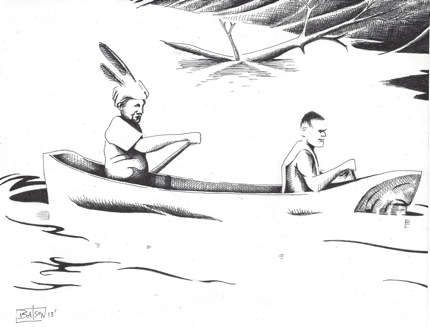 This dugout, made from a tulip poplar tree by the Edwards Family of the Onondaga Nation, was launched from Rensselaer, New York on Sunday, July 28, in a flotilla of over 150 boats heading down the Hudson River to the United Nations. This paddling procession commemorates the 400th anniversary of the first covenant between Native Americans and Europeans, enshrined in a sacred object called a Two Row Wampum. On August 7, Dwaine Perry, Chief of the Ramapough Lunaape, will meet the floating delegation as they overnight in Piermont. On August 9, the Two Row Wampum Renewal Campaign will land on and march across Manhattan Island to the United Nations to participate in the International Day of the World’s Indigenous Peoples.

The Two Row Wampum paddle was organized through a partnership between the Onondaga Nation and Neighbors of the Onondaga Nation (NOON) as part of a statewide educational campaign to commemorate the 400th anniversary of the first treaty between the Haudenosaunee (also known as the Iroquois) and European settlers. To this day, the Haudenosaunee retain the Two Row Wampum Belt on which this treaty was originally recorded.

Approximately 150 boats launched from Rensselaer, New York on July 28 for the 13-day trip to New York City. The flotilla will paddle between 9 and 15 miles each day and camp along the Hudson River route.

On Wednesday, August 7, the group will come ashore at Nyack Beach State Park at noon for lunch. At 5p, the group lands at Parelli Park in Piermont (Hudson Way and Piermont Ave.) where they will be greeted by Chief Perry.  The group will overnight in an encampment at 31 Ferry Road.  The Sparkill Creek Watershed Alliance, along with the Village of Piermont and the Piermont Civic Association will be hosting the Tow Row paddlers. There will be a “Sharing the River of Life” program at 7p, in the Goswick Pavilion on Ferry Road. 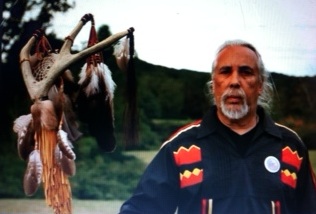 Chief Perry is taking the opportunity of the flotilla’s arrival in Rockland County to remind the river villages of the central role that Native American people played in the creation of this nation:

“I would Like people to know that without the aide of the Ramapough Lunaape there would not have been a Lexington and Concord nor an American Revolution as we know it,” he explained.

“When George Washington was a Captain and Alexander Hamilton was a lieutenant working in the Ramapo Pass; our ancestors allowed them the use of the strategic route, which was then a choke point and the only way into the colonies from the North with any meaningful troop levels.”

According to Chief Perry, the first 900 hundred canon balls used in the American Revolution were produced from the Lunaape Mines in Ringwood. The fabled “Chain across the Hudson” was made from their iron.

“Yet those who have created the greatest nation on Earth have failed to acknowledge the people who have made this grand experiment possible,” he continued.

The goals of the Two Row Wampum Renewal Campaigns are described as a three-part vision of peace, friendship, and a sustainable future in parallel forever. The choice of using the Hudson River (known as the Muhheakantuck, or the Great Mohegan by the Iroqois and “the river that flows both ways” by the Lunaape), as the conveyance to take the original treaty to an international summit is potent with symbolism that reinforces these goals.

Create awareness of the link between environmental destruction and the US’s failure to live up to the promise of the Two Row Wampum Treaty.

Support/help facilitate change in the way people relate to and orient themselves toward the environment.  Engender respect for the laws of Nature.

Celebrate the Hudson River, the efforts to clean it and heal it and the work remaining to do for the benefit of future generations;

Encourage appreciation of and learning from the ways of the river: its currents, its populations of water beings; its riverbanks and mountains; the eagles that fly above; its incomparable beauty and power to support and sustain life.

Engage people in discussion as to how we can live together and move forward towards a sustainable future in peace and friendship in perpetuity, using the Two Row Wampum as a model.

The river that these canoes navigate was silent witness to the original treaty that is recorded on the Two Row Wampum that the flotilla carries. The act of paddling, with boats joining along the way and camping in various river communities allows native and non-natives to create new and deepen old relationships. And as we are all inextricably entwined by the fate of the river, the Hudson is the ideal locus and focus for the campaign’s events.

Proof of the preeminence of the environment in the Two Row campaign is evident in the fact that six of the campaign’s 16 goals address our ecosystem. Present Haudenosaunee views on environmental issues include aggressive advocacy to prevent hydrofracking and reverse climate change.

“It is hoped the Two Row Wampum Campaign will heighten the understanding for the urgency of increased environmental awareness. The need for mutual respect of both human beings and the environment is crucial to the overall quality of life and survivability of the planet. Water is the blood of our grandmother, the Earth. Without clean water, we all will perish. Without the nurturing of the environment, the essence of all life, man will be diminished correspondingly and without exception,” Chief Perry said.

It is easy for recent generations to say that we were not present when some of the world’s greatest atrocities occurred: events like the extermination and displacement of native peoples, the systematic enslavement of races and the holocaust. But this week, all of us who live on the banks of the Hudson River are party to the renewal of a treaty between native and non-native people. And we are also witnesses and participants in the continual degradation of the Hudson River.

We should embrace the environmental goals of the Two Row Wampum campaign and work to renew the Hudson River by protecting her from hyrdofracking, desalination and pollution. Environmentalism is a project that benefits all the people in the Hudson Valley for generations to come and strengthens the bond between native and non-native people, a relationship that requires generational renewal.

Wed, Aug. 7 at noon the flotilla will come ashore at Nyack Beach State Park for lunch.

Wed, Aug 7 at 5p, the flotilla lands at Parelli Park, Hudson Way and Piermont Ave in Piermont and will overnight in an encampment at 31 Ferry Road.  There will be a “Sharing the River of Life” program at 7p in the Goswick Pavilion on Ferry Road.