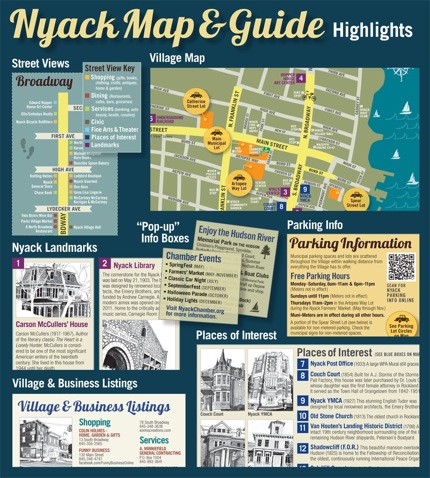 At the request of  the Chamber of Commerce, three local artists have put Nyack on the map. Literally.

Nyack has been on the figurative map as a tourist destination for over a century. Even though our downtown commercial district has expanded and contracted, it is arguably the largest non-mall shopping option in Rockland County. Since the early 1970s, tens of thousands of visitors have descended on the village annually to attend spring, summer and autumn street fairs. More recently, our location on an increasingly popular bicycle route has increased tourist traffic. The map and guide is a tool to welcome and direct these constant arrivals and to entice them to return. 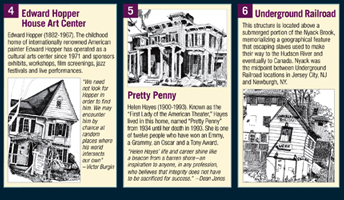 “We wanted a document that would be useful to first time visitors as well as long time residents,” said Nyack Chamber of Commerce President Scott Baird. The Chamber, which sponsors two annual street fairs, the largest Halloween parade after NYC’s and the year-round Farmers’ Market, commissioned three local artists to create the map.  I was honored to be on that creative team.

“Before 2008, The Chamber produced The Guide to the Nyacks…a complete handbook of local resources that was a staple of visitors and residents alike.  But when the recession came the revenue for the map dried up,” recalled Carlo Pellegrini, the long-time Chamber officer who chaired the map committee. “You cannot imagine how many phone calls we would get year after year for current and back copies of The Guide. Real estate agencies in the area clamored for it.”

In 2009, Gina Cambre of Casa del Sol proposed that the chamber provide visitors a parking map. “We started researching companies to take on the project for us, but nothing fit,” Pellegrini said. “Then we realized we had a reservoir of local talent that was already working to put Nyack on the cultural map.”

According to Pellegrini, “Kris Burns was reinvigorating the legacy of Edward Hopper as the artist-in-residence at the Edward Hopper House Art Center and the organizer of the Hopper Happens Festival. Loraine Machlin had designed the Hopper Happens logo and had been the go-to-graphic-artist for many local non-profit organizations and arts groups and Bill Batson was the first artist-in-residence for the Farmers’ Market and was publishing his weekly Nyack Sketch Log. Each was dedicated to Nyack, local to Nyack and capable of producing a map for Nyack.”

The goal of the creative team was to produce a map that was easy to use for the visitor seeking parking, shopping and recreational information, but  would also showcase the cultural and historic relevance of the village.  The year-long map project was shepherded by Kris Burns. The bold, colorful design and easy functionality of the map is the work of Loraine Machlin. I contributed text and illustrations. We hope that you will see the map in the hands of tourists as they navigate Nyack and that they will hang on to their copies and take them home as keepsakes, leading them to return again and again.

“Without Carlo Pellegrini and his Map Committee members Roger Cohen and Paul J. Curley, this unique collaboration between the arts and the commercial community would not have been possible,” said Baird. “The local economy will benefit from our Nyack Map & Guide, and the village’s reputation will be enhanced by the dissemination of this impressive document.”

Where to find the Map and Guide: 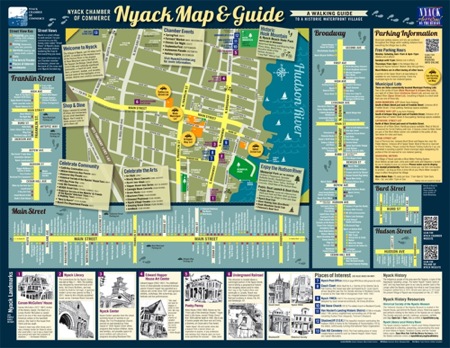 Bill Batson is an activist, artist and writer who lives and sketches in Nyack, NY. Nyack Sketch Log Art Puts Nyack on the Map” ©: 2013 Bill Batson.