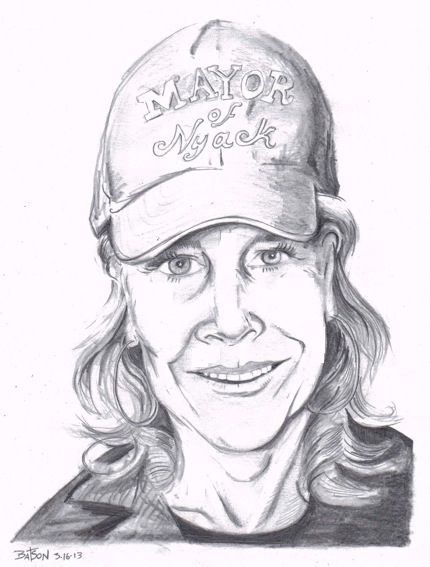 Jen Laird-White is only the third woman to be mayor of the Village of Nyack. In recognition of Women’s History Month, Nyack Sketch Log talks with the mayor about the State of The Village, the backlash officials received after passing a resolution supporting Governor Cuomo’s Gun Control legislation, the high and low points of her first term and her future plans.

Are there any particular blessings or burdens for women in public office?

Holding public office is no different for men or women today.  It’s equally tough for everyone because there has been such a breach in the public trust. This is, however, an exciting moment to be in public life because everywhere you look women are taking on leadership roles in business and government.

Are there any women in politics that inspire you?

Recently, I have had a chance to work closely with our member of Congress, Nita Lowey. I am amazed by her work ethic, passion and fearlessness. She is a total inspiration and we are lucky to have her representing us in Congress.

The Village Board recently passed a resolution in support of Governor Cuomo’s gun control legislation that drew some loud criticism from some people. Were you surprised?

Our gun control resolution seemed important to pass. Doing nothing was no longer acceptable. I have been to Newtown. It is a place much like Nyack. I know families that knew some of the children killed in Newtown. I watched them head off in deep grief to funerals for seven years olds.

It is complicated and difficult to safely own and operate a car and there are many requirements that must be met to do so. It should be that difficult to own and use a gun. So when you consider that in 2015, gun fatalities are predicted to surpass deaths caused by traffic accidents, there is a clear need for responsible policy reform. As a Village Board, we all agreed to support our Governor’s attempt to stop the escalating violence.

The backlash has been quite depressing. My office voice mail was filled with profane vaguely threatening statements about our homes and our children. It made me wonder if people who call a municipal office to make profanity laced threats should have unfettered access to automatic weapons.

Was that the low point in your term so far?

No. The low point was Hurricane Sandy. The devastation was stunning, we still have twenty families without homes. In the immediate aftermath, relief was not easy or forthcoming. During the storm and in the horrible days right after, we lost power, we sustained substantial damage as a community and we lost a life. It was a terrifically difficult time. But our community spirit and resolve was kept afloat by our first responders who tirelessly and without complaint went about saving lives and working to maintain order and restore services.

What has been the high  point? 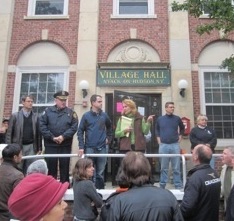 There were actually many high points during those bleak days.  The Village Hall steps provided a gathering spot for everyone. One neighbor was more generous than the next. There were guys from Georgia who left their homes and families to patrol our streets to restore power. Even as people suffered their own loss and anxiety, they reached out to others during those meetings. The selflessness was incredible.

What is the state of the village?

I am proud to say that the state of Nyack is very strong, despite the continued struggles of small towns across the nation. The village finances are in the best shape they have been in for decades. The taxpayers actually have a substantial savings account. It’s a reserve for the unexpected.

We are committed to keeping this year’s tax increase below the 2%  tax cap. We are still hopeful we can make some additional capital improvements at that level. We are hoping to pave Broadway and a few more residential streets as well as adding more lighting to South Broadway in an effort to improve the foot traffic into that part of the village.

NYLO Hotels, a company that operates boutique hotels for business travelers at unique locations, is proceeding through the land use boards to get approval to build a new hotel on Upper High Avenue near the Thruway. Their goal is to begin construction sometime in the next six months.

Our waterfront and, in particular, our marina were devastated by Hurricane Sandy.  That said, we have hired an amazing new recreation director Melody Partrick, who is working on programming our park so that our residents have recreation activities here in their own backyard rather than having to travel to Orangetown for play.

We have started a Public Art Committee to look at ways of putting art everywhere in our village.

There is an incredible and active group of parents who are raising money through the Nyack Park Conservancy for an impressive new playground and the Park Commission is working on plans for a new garden near the playground.

While nighttime disturbances along Main Street continue to occupy much of our court time, crime is down. The streets are cleaner because the new parking program has generated revenue for clean up and other related costs and put some extra revenue into the taxpayer’s coffers. 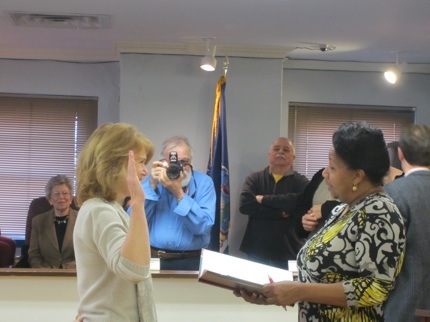 As a member of the Governor’s Transit Task Force, I am committed to finding viable transit options for Rockland. I think we need to work closely with South Nyack and Grandview, the two communities who will struggle most during the construction phase to determine what they need for construction survival and what all of our needs are for transit in the future.

How is your family surviving your public responsibilities?

Patiently. My rather quiet husband Richard has had to learn to gab a bit more and my boys Jack and Luke can’t really get in trouble because everyone knows their mother. It’s awesome!

Are you going to run for re-election?

Definitely. There is a ton of work to do. The job was intended to be a part time commitment. I have chosen to do it full time because, not only am I honored to have the opportunity to serve my community in this way, I truly think that the only way to accomplish anything is by putting your nose to the grindstone and working like crazy.