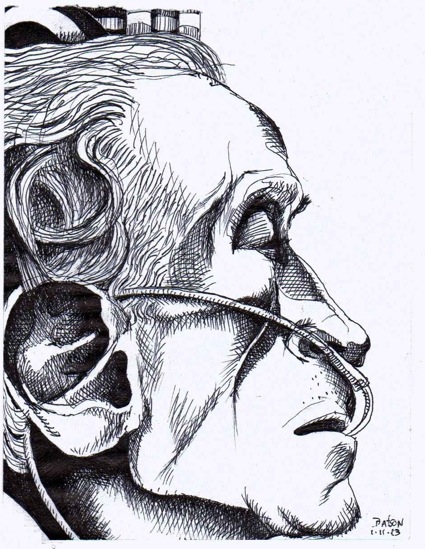 I spent four nights at my 91 year old father’s bedside last week. Before his hospitalization, I had already decided that I was going to sketch log about the Affordable Care Act, Barack Obama’s singular achievement from his first term, as he took his second oath of office. When my  father was admitted to Nyack Hospital on the morning of January 10 with pneumonia, he became the subject of my column and the involuntary model for this drawing. That he was discharged five days later, smiling and on the mend, is a minor medical miracle and made my interest in the issue of health care more than just academic.

The aging of America is adding additional stress to a health care system that was becoming increasingly unaffordable for workers and small businesses when Obama took office in 2009. Every Democratic Party President elected since 1932, and Republican President Richard Nixon had sought a universal remedy for the haphazard system of health care delivery, insurance and oversight in our country.  After a 219 to 212 vote in Congress, the Patient Protection and Affordable Care Act was signed into law by President Obama on March 23, 2010.

On the morning of my father’s admission, we had a national reminder of the importance of a coordinated system to maintain public health.  A flu epidemic was sweeping the country with 47 states reporting widespread outbreaks.  The only thing that spreads faster than a rumor or a virus, is the rumor of a virus.  In Boston, the subways were shut to slow the contagion. In New York, Governor Cuomo issued emergency orders easing vaccine restrictions.

Emergency room staff at Nyack Hospital described the day my father was admitted as the busiest in memory. Having an elderly family member in a crowded ward during an epidemic is harrowing. The fact that hospital staff were all wearing surgical masks was at once both reassuring and alarming.

Fortunately, a lack of health insurance did not add another layer of stress to our dilemma.  Like all Americans 65 years of age and older, Medicare is my father’s primary health insurance.  Much of the impetus to control the cost of health care is to save this important federally-administered program that was signed into law in  1965 by President Lydon B. Johnson.  His secondary insurance is the Empire Plan, a benefit he earned during ten years of employment with the Nyack Water Department. Although we haven’t seen the entire statement from the hospital, I would not be surprised if the final bill approaches $40,000.  Thankfully, a majority of these expenses are covered by his plans. (post script:  his actual bill in the amount of $37, 164.31 for four days of care arrived on 2/6/2013.)

Although the Supreme Court upheld the Affordable Care Act in a 5-4 decision on June 28th, 2012, they struck down as unconstitutional a provision that would have greatly increased the numbers of insured by sanctioning states that did not expand Medicaid. Medicaid, also signed into law in 1965, is a means-tested health care program for low-income families, jointly funded by the state and federal government.

One of my favorite provisions of the Affordable Care Act is called Medical Loss Ratio (MLR). MLR requires that 80-85% of insurance premiums go toward medical expenses.  Starting last year, insurers began rebating the difference to policy owners. Another widely popular provision allows parents to keep their children on their policies until the age of 26.

The heart of the Act, Health Insurance Exchanges, will begin operating in 2014 and will create a competitive market that in theory should reduce the cost of health insurance premiums, making health care coverage more affordable. Individuals and business will be able to access these exchanges to locate affordable health insurance plans.

Even if these measures fall short of radically transforming our current system, the passage of the Affordable Care Act reasserts the fundamental notion that every American should be able to find care when they fall ill.

I am realistic about my father’s mortality. We are committed to prolonging his life as long as he is comfortable. You can only imagine our joy when we noticed that the patient who was unresponsive when he was wheeled into the hospital in the morning on a stretcher was flirting with nurses by dinner.  But this tender mercy would not have been possible without the efforts of dozens of talented and dedicated professionals.

Because my father suffers from dementia, I stayed with him each night so that I could help the staff communicate with him if he became confused or belligerent. I was a witness to every shift change and got to see the rhythm of the perpetual motion machine that is a hospital. I watched the constant stream of housekeepers, transporters, dietary staff, personal care aides, nurses, technicians, therapists and doctors, from every part of the world, work in concert to care for each patient. I came to appreciate what goes into providing the level of care that we all might need some day.

The health care system is complex, enormous and central to our lives. For decades, as the cost of care and insurance premiums have escalated, the federal government had failed to enact substantial reforms.

But like all things great and small in this hyper-partisan nation, implementation of the Affordable Care Act will be a struggle. On January 3, 2013, Michelle Bachman (R-Minn) introduced the 34th Bill to repeal what Republicans still refer to derisively as Obamacare, despite the fact that the President embraced the misnomer and the initiative during his winning re-election.

Americans deserve affordable care and the political leadership willing to deliver reform. I know the blessing of having a loved one whose care is covered and I lament the fate of those without. So on the occasion of his second inauguration, I say “Thank you, Mr. President” for the Patient Protection and Affordable Care Act.

Special thanks to the men and women of Nyack Hospital.