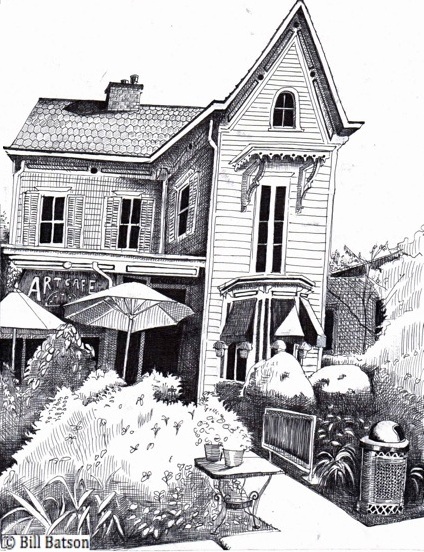 The walls of the Art CafÃ© celebrate drawing, painting and photography. The building is an exquisite example of the reserved Italianate architectural style, and the food that comes from the kitchen, in presentation and preparation, gets high culinary marks from critics and customers alike, which is why this cafÃ© is called art.

The eatery on South Broadway is a family business.  The owner and manager, Dan Kramer, drew on the experience of his family to launch the business in 2006. Dan’s mother, who was born in Israel to a family that has been in Jerusalem for nine generations, learned the art of cooking and hospitality from her mother, Pnina.  Dan developed his business sense from his uncles who run enterprises in Toronto and New York. The menu is based on the health-conscious diet practiced by his entire family.

When they first opened, they barely had enough space to hang an exhibit, occupying only half the bottom floor of 65 South Broadway.  But visual art was not the creative discipline that inspired the cafÃ©’s name. The canvasses that Dan sought to display were the surfaces of the hot beverages that he served.  Baristas in Israel had been making elaborate designs on the tops of lattes for a decade.  Dan introduced Latte Art to Nyack. 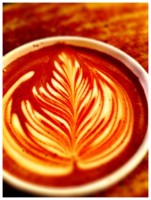 If location is a major factor in the success of a business, Art CafÃ© is a study in being in the right place at the right time.  But the building had to be relocated for the alignment to be perfect.  Originally built in 1871 for Elise Depew Stevenson across the street, this house was moved sometime between 1903 and 1910 to make room for the Post Office.  Where it now sits, the building is bracketed between two public institutions; the library and the Post Office attracting constant foot traffic: an ideal scenario for a cafÃ©.

The cramped circumstance of their interior space was vastly improved two years ago when the business they shared the building with, Klay Gallery moved allowing the Art CafÃ© to expand into the entire ground floor. The final blessing comes being situated on the path of the great bicycle migration route that runs through the village.

Art CafÃ© is not just resting on its location laurels.  Dan draws inspiration from his customers to percolate new ideas, as well as coffee. The regular series of evening programs, called ‘€œSmart CafÃ©’€ was an outgrowth of conversations that Dan had his guests. ‘€œI was so invigorated by the projects that people were telling me about, I wanted to share that energy and those ideas with others.’€  Recent programs have included ‘€œThe Art of Being a Woman’€ by local make-up artist and fashion designer Victor Alex Francisco and ‘€œhealing through raw foods,’€ presented by Raw Julia.  The next Smart CafÃ© will feature Rebecca Meyerson of Simply Healthy Living on Tues., Oct. 23 at 7p. 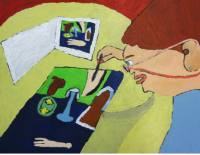 With increased space, Dan has been able to expand the visual arts program showing paintings and drawings in the front rooms and photography in the back.  The current exhibit is from the Rockland Living Museum (RLM).  RLM is an art therapy program based at Rockland Psychiatric Center. ‘€œWe try to spread the joy and beauty of art-making and being connected to nature,’€ said Chris Randolph, a licensed art therapist and the founder and director of RLM. The therapeutic benefits of the program are not limited to the participants.  Spending a few minutes admiring the work by RLM artists, in particular Judyann E., is elevating and enlightening.

And for the performing arts, there is a Thursday night program of acoustic music dubbed the Chirp CafÃ©.

Music, workshops and exhibitions are however, the hors d’oeuvres and dessert.  The main course at Art CafÃ© is fresh food and drink.  The menu is inspired by the all-encompassing Israeli-Kibbutz style breakfast, a meal that includes juices, eggs, bread, salads with cheese dips and olive tapenades and of course, coffee

Kramer thinks that American cafÃ©s have become like self-service filling stations, where people are moved through quickly with take-out orders in hand.  He has modeled Art CafÃ© on the European cafÃ© custom where patrons are encourage to sit unhurried, and savor aromas, flavors and ambiance for hours, not nano-seconds.

This philosophy extends to how the food is prepared. ‘€œWe don’t pre-make a regular coffee.  Every cup is fresh brewed,’€ Dan declared. By using a loose leaf, rather than bag system, people can customize their teas.  Soon, he hopes to be able to add fine wines and craft beers to the beverage menu.

This establishment has contributed a lot to the civic and commercial life of the village during its short tenure. The Kramers have revitalized one of our quaintest historic properties, set a standard for serving fresh and healthy food and drink, and provided a new venue for community forums and local artists. Even though they are relatively new to the village, Art CafÃ© has the quality of an instant landmark where you can sample a menu of healthy culinary and innovative cultural treats, and have a quintessential Nyack experience.

Special thanks to Brian Jennings at the Nyack Library for background research used in this article.