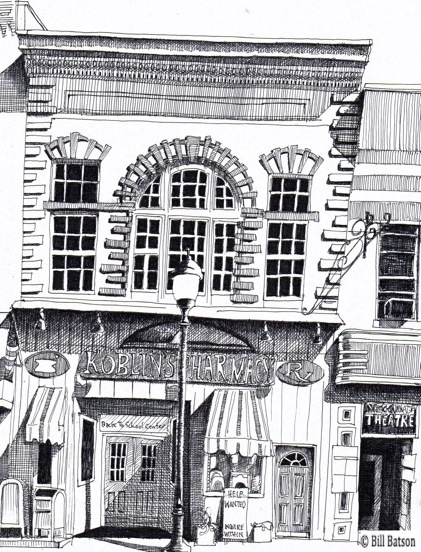 Jerry Koblin works his age.  The owner of Koblin’s Pharmacy turned 75 last month, and he works that number of hours every week.   Since he took over the family business from his father in the late 1960’s, Jerry has been a driving force in the civic and commercial life of Nyack.  And with the recent arrival of the national pharmacy chain Walgreens, Jerry has no plans to close shop or cut back on his hours.

Koblin’s is not the first pharmacy to dispense medicine and merchandise from this address on Main Street.  In 1890, John D. Blauvelt relocated his Spring Valley apothecary to Nyack in an effort to create the most exclusive drug store in Rockland County.  The interior looked more like a soda shop than a pharmacy and the staff more like waiters than health care workers.

In 1934, Jerry’s father bought the business from the Blauvelts and continued filling the community’s prescriptions. Jerry’s first position in his father’s store was as a stock runner, resupplying the shelves from the cavernous storage space in the basement as products were sold. After his graduation from the University of Connecticut and six years in the Air National Guard which included a year and a half  at Andrews Air Force base, he brought his pharmacist’s license back to Nyack. 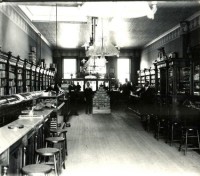 Blauvelt Pharmacy circa 1890. Photo courtesy of the Stockmeyer Collection

Jerry’s father was ambivalent about passing on the torch to his son.  “He pleaded with me not to do this” Jerry told me.  His father warned him that the obligation was 7 days a week and 365 days a year.  But Jerry looked at his father and saw a man that everybody liked and respected. “I never thought about doing anything else.”  But he also acknowledges that his old man was right about the nature of the commitment.

The health care system that prompted Jerry’s father’s admonition was profoundly less complex and litigious than his son has experienced since he took over. In 1970, people paid for their medicine out of pocket.  There were no health insurance companies and no computerized records. Most prescriptions cost between $4 and $6 to fill.  Jerry vividly remembers the first time a third party paid the cost of someone’s medication.

In the last nine years Jerry has seen the cost of prescription medication skyrocket.  He feels the impact of this escalation as a retailer as well as an employer who provides health insurance for his nine full time employees. “We have one product that used to cost 6$ a tube that now costs $100.”

The village that Jerry has faithfully served for over 40 years has also gone through massive changes. When his father opened his business, Nyack was a regional shopping Mecca. Many stores stayed open until 11p to meet their customers’ needs. Nyack was a mini-city that never slept.  Today, according to Jerry, Nyack may not sleep at night with young people flooding the streets for the bar scene, but during the day “you can throw a baseball down Main Street at noon and not hit anybody.”

In order to attract business over the last several years, Jerry has added consumables like eggs and milk to the inventory.  Delivery service and store charge accounts are available as well.   But there is no substitute for the personal attention of a responsible community-based health care provider. When the son of a customer handed him a note recently describing his father’s symptoms, Jerry’s blunt and emphatic response may have saved a life. Koblin urged the son to take his father to the emergency room immediately.

Like health care providers around the nation, Jerry is bracing for the sweeping reforms that will come with the implementation of the Affordable Care Act, also known as Obamacare. “I don’t know how it will affect us, but the pharmacist is usually the last to know.” 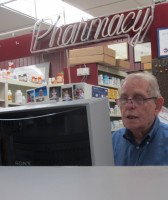 I asked Jerry how the arrival of Walgreens would affect his future. He said he was confident that the village would continue to shop at Koblin’s. “My age tells me to get out, but not my head.  It’s just another box store. We will lose some business, but not a ton.”

Generics might be fine for pharmaceuticals, but not for communities. Family owned businesses like Koblin’s make Nyack more than a collection of intersections but a unique destination. Chain stores offer some value, but they can’t compete when it comes to history and personal relationships. The continued vitality of Koblin’s — and other locally owned and operated stores — is the best prescription for a healthy village.