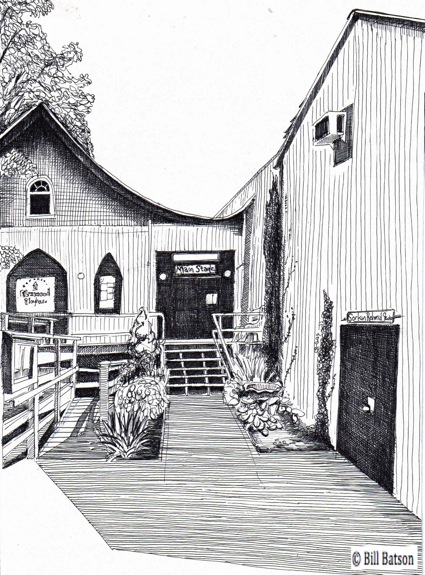 The history of the Elmwood Playhouse is so extensive they have their own historian. Mike Gnazzo holds that job, and a slew of others. In his primary role as Lighting Designer, Gnazzo animates and enhances the action on the stage. As historian, he sheds light on the activities of a volunteer theater company that has been staging plays in Nyack since 1947.

For their first ten years, the company was itinerant, performing in homes, schools, hotels and a short run at the Rockland Psychiatric Hospital. The troupe had as many names in the early years as venues, performing as the Curtain Callers, the Camp Shanks Players and the Rockland Community Theater. It didn’t matter what they were called or where they performed, according to Gnazzo, “they were a group of people who wanted to get together and stage plays.”

In 1957, the company found a permanent home and a lasting name. Funds were raised to purchase St. Paul’s Lutheran Church on Park Street, which was constructed in 1898, for $8,000. For their inaugural performance of “Bus Stop,” the audience sat on church pews. The troupe borrowed their name from the first word of the phrase that was used to remind residents of their phone number prefix:  “Elmwood 8.”

The Elmwood Playhouse holds the torch for what was once a bustling theater district in Nyack. In the first half of the 20th century, you didn’t have to travel to New York City to find a street called Broadway with the names of celebrities on marquees attracting large audiences for live performances. 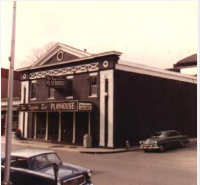 Equity actor and local realtor John Patrick Schutz has reflected on the heyday of our Broadway on his website, At Home In Nyack.  Schutz blogged about his mother’s tales of seeing stars like Liza Minnelli and Elliot Gould at the Tappan Zee Playhouse, which was located across the street from the YMCA. He went on to share his own memories of family outings to the cavernous 1,638 seat Rockland Theater that closed in 1967.  The building was eventually demolished and the site redeveloped as the Victoria Mews Condominiums.

Around the time that a fire sealed the fate of the Tappan Zee Playhouse in 1977, the Elmwood Playhouse was expanding. Under the leadership of Board Chair Elaine Vogel, they acquired the adjoining properties on New Street that included a hair salon, a taxi stand and a furniture warehouse. The annex now houses the theater’s scenic workshop, storage spaces for lighting, props and costumes, and dressing rooms and rehearsal studios that are connected by a series of maze-like passages. 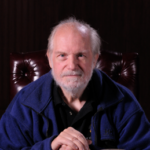 Except for a short-lived experiment when the directors of plays were provided a salary, volunteers conduct all of the work that goes into managing the theater company and staging each performance. Over the years, many individuals have made memorable contributions to the company. Bob Olson designed 216 shows before his untimely death in 2009. Not only did he enrich the lives of Nyack residents directly through his craft, he launched the careers of two women that have succeeded on theater’s greatest stages, entertaining millions.

Peggy Eisenhauer, nicknamed Girlie by Olson when she was 13, went on to win a Tony for her lighting design for “Bring In Da Noise, Bring In Da Funk.” Olson dubbed Jennie Marino, who is still active with the company, “the powerful Katrinka.” Marino has created specialty props for “Phantom” and “Les Miserables.”

Many of the Life Members of the troupe have over 30 years of service. It is also common to see several members of families join.  Jennie Marino’s son Matthew is working on the lighting for the next Elmwood play, Living Out, a production that is being directed by Mike’s wife Kathy Gnazzo. The current Board Chair, and frequent performer Larry Beckerle was brought onto the stage by his mother Denise. There is something devout in the length and intensity of the volunteer commitment of Elmwood Playhouse members. Could it be that this building, with its ecclesiastic peak and catacombs full of props and costumes has become a Cathedral for musicals, comedy and drama?

In order to ensure that the lights never dim on community theater in Nyack, the company operates the James Naismith On-Stage for Musical Theater project. This youth education initiative is named after a beloved past director who was also the grandson of the inventor of basketball. Classes are conducted year round for children 8-16 years of age.

Kathy Gnazzo’s production of “Living Out” opens on September 14th and runs until October 6th. The company is approaching their 350th production and Mike Gnazzo estimates that the audience over the last 66 seasons surpasses 250,000. Driven by the devotion of 1,570 people who have stood on the stage of this intimate 99-seat theater and the 216 people who have sat on the Board, the Elmwood Playhouse has kept a sacred theatrical oath. Where larger, commercial ventures have come and gone, this humble collective of true believers make sure that in Nyack, the show goes on.