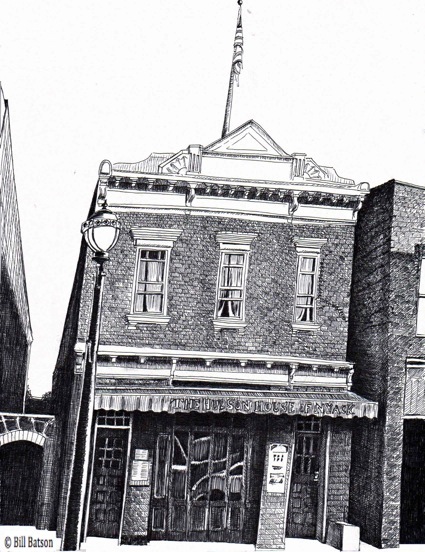 Last May was a big month at the Hudson House, one of Nyack’s premier restaurants. The New York Times praised new chef Jeffrey Kaufman for his “dazzling dishes.” And owners Matt Hudson and Amy Lehman received an award for Historic Preservation from Rockland County Executive Scott Vanderhoef. In both culinary standards and civic responsibility, the Hudson House is getting high marks, which is fitting when you are serving the public from a building that was once Village Hall.

From 1881 until 1970, Nyack’s trustees and magistrates deliberated and passed judgment in the two-story brick building at 134 Main Street. Architectural elements from the original building, like stamped tin walls and ceilings are still in pristine condition. The space where jail cells once stood to dry out winos are now used to incarcerate wine bottles.

Nyack’s government vacated the building in the 1970’s and moved to their current location on North Broadway, the former offices of Orange and Rockland.  Since then, three eateries have opened shop on the spot. The Pasione twins operated a luncheonette on the first floor that lasted for several years.  A Soho restaurateur purchased the building and undertook extensive renovations, opening Raoul’s Village Hall Restaurant in 1981.

That same year, Matt Hudson was tending bar in Westchester. Hudson, the eighth of ten children, followed his brother Eddie into the hospitality business. His parents moved the family to Rockland County from the Bronx in 1950 with 12 like-minded neighbors to establish a utopian catholic community called Marycrest. His mother Dorothy not only managed to feed her large family, but she instilled in them a love for cooking that led seven of her children to spend a major part of their careers in the food industry.

When the establishment that Matt worked in began to falter, he approached his brother Eddie’s boss, Serge Raoul about a management position in his Nyack restaurant. Hudson was advised that the position required that he be available seven days a week. If he was going to work that hard, Hudson reasoned, he would rather buy the business and work for himself.

At the time that Matt Hudson and Amy Lehman opened Hudson House they were married, owned a home and had three small children. Many businesses fail in the first two years. For Matt and Amy, the marriage failed, but the partnership and the businesses survived.

Hudson House Manger Skye O’Jea Spiegel worked with Matt in Westchester and decided to join the couple when they opened their new restaurant. Pedro Reyes, who previously worked for Raoul, stayed on to help them launch the new venture. The team of four has stuck together for over two decades.

It takes a lot of creativity as well as persistence to succeed in the restaurant business.  Matt is a photographer and sculptor and Amy is a professional dancer and choreographer. Many of Matt’s black and white portraits of family and friends and lush landscapes of the Hudson River are on display and give the restaurant its river village ambiance.

This artistic attention to detail is visible inside Hudson House — and out. In November, the upper fascia of the building’s facade, where the words “Village Hall” once appeared, is being removed and will be replaced with a composite material that resists rot without needing to be continually repainted.

One measure of their success is that Matt has taken out his wood chisels and started to sculpt again. He had set aside his tools for almost 30 years to focus on work. The bar of the Hudson House features three large wooden bas-reliefs of design features from the Federal building on Church St in Manhattan. Two other pieces are recreations of NYC manhole covers: one representational, one surreal. 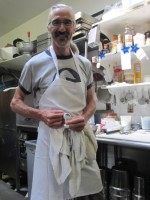 Matt Hudson in the kitchen with his trusty baker’s timer

Hudson also creates for the menu as the restaurant’s pastry chef. As I interviewed Matt, he was painting chocolate into pans for his acclaimed black bottom banana cream pie with a ginger snap crust. When Skye walked into the kitchen she asked Hudson if he had finished preparing his puddings.  The request reminded Matt that it was the smell of his mother’s rice pudding that inspired him to learn to bake.

In a small town, a popular restaurant is like a civic center. As they approach their 23rd anniversary, the Hudson House is more than a place to eat; it’s a local institution. In a community like Nyack that values historic preservation, art, fine food and hospitality, Hudson House is right at home.

Special thanks to Brian Jennings, the Librarian Supervisor at the Nyack Library

In this article:bill batson, hudson house