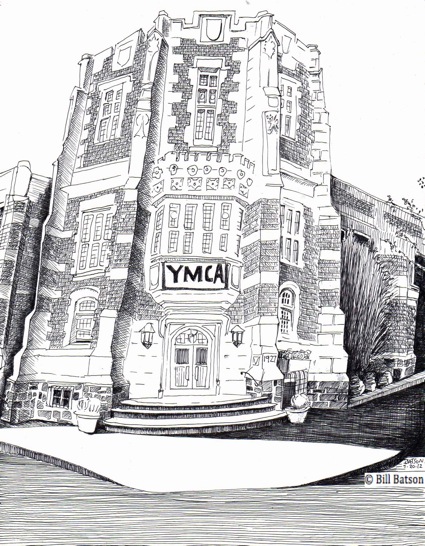 The YMCA is such a ubiquitous institution they practically own a letter of the alphabet.  The Y gained global brand identification by opening over 2,500 branches across the United States.   A universally recognized 70’s disco song with dance steps that spell out their name hasn’t hurt.  For generations, many in Nyack have become YMCA members for social and recreational purposes.  Their architecturally distinctive headquarters has stood unchanged since its construction in 1927, but the organization and Nyack have undergone profound social and cultural changes.

The first YMCA was founded in England at the height of the Industrial Revolution.   Worried that the rapid urbanization that characterized the period would have a destructive impact on young people, the organization created programs to encourage religious study and clubs that promoted fellowship.

America’s first Y opened in Boston in 1851.  Just twenty years later in Nyack, the Rev. Stephen Merritt Jr. started a reading room inspired by the British example to address similar concerns. At the time, the village was experiencing dramatic population growth due to our own smaller scale industrial boom.

Our Young Men’s Christian Association was incorporated in 1888 and originally operated from the St. Nicolas Hotel on Main Street.  A boys’ division and a Women’s Auxiliary were formed in 1890.  New York State Supreme Court Judge Arthur Tompkins was an active early board member and for the first 50 years of its existence the Y was led by Nyack Trust Company President Frank Crumbie.

The early directors of the Y secured their legacy in stone and steel with the construction of the organization’s headquarters on the corner of Remsen Street and South Broadway.  The acquisition of the land for the structure was made possible by a donation from Leroy Forest and over half of the $280,000 building fund was provided by Edwin Gould.  Celebrated architects M.L and H.G Emery of New York designed this imposing  edifice that would look like a medieval castle if you added a turret and a few parapets.

As the Y has evolved over the years, the leadership has had to adjust its original mandate to meet the changing mores in American society.  The first leap was over the gender gap.  When the Y was incorporated women did not have the right to vote. By the time the cornerstone was laid for the Nyack YMCA, the US constitution had been amended to give women suffrage. By the mid-1950s YMCA membership would be extended to women, Catholics and Jews.   But in a saga that mirrors the American experience, the issue of racial integration was a longer and more tortured affair.

In the late 1940’s, Francis Cooke, a black teenager from Nyack rose to be the statewide leader of New York Hi-Y, an enrichment program sponsored by the Y and the public schools.   This fact did not qualify Cooke for membership in his local branch.  Even though meetings to address the injustice of racial segregation at the Y were well attended and chronicled in the The Journal-News, it wasn’t until the minutes of a board meeting in 1964 were adopted that the institution was officially integrated. Dismantling the formal policy of exclusion did not immediately resolve the problem of inclusion.  The economic barrier of membership fees and the slow healing wound from the prolonged enforcement of the biased policy have been a challenge to subsequent administrations at the Y.

Even though the faÃ§ade of the building is unchanged, the organization has expanded to meet the shifting needs of the community.  Firstly, it is no longer known as the Nyack YMCA.   Now organized as the Rockland YMCA, the organization has 4,100 members and serves 1200 children a day at 27 locations throughout the county.

Youth in Government participants in Albany

‘€œOne of the main goals of the Rockland YMCA is to help young people live healthier and more socially responsible lives,’€ says Y CEO Chuck Maze.  He described the organization’s efforts to combat the modern culture of physical and social stagnation that is the hallmark of the computer age. The lack of physical activity and civic engagement does not bode well for the personal prospects of this generation or the health of our body politic.  In an effort to make the intervention of Y programs available to young people regardless of identity, ability and economic status, Maze reports that over $250,000 was provided in financial assistance for membership and program support last year thanks to many generous contributors, grants and special events.

Just as young Christian men in England in the 19th century were confronted by the cruel fortunes of sweeping change called industrialization, young people of all genders, races and religions that enter the YMCA today face an equally daunting future in the form of globalization.  Having the presence of an enduring and evolving organization in our community that is dedicated to their physical fitness and social well being is critical.   So let me be the first to give three cheers to the YMCA as they prepare to celebrate their 125th anniversary next year.

Thanks to former YMCA board member Henry Bischoff for his scholarly and candid organizational history that was published in 1988 on the occasion of the YMCA’s centennial.  And a special thanks to Brian Jennings of the Nyack Public Library for making valuable local history documents available on line.

Bill Batson is an activist, artist and writer who lives and sketches in Nyack, NY. Nyack Sketch Log: “The YMCA’€ © 2012 Bill Batson.