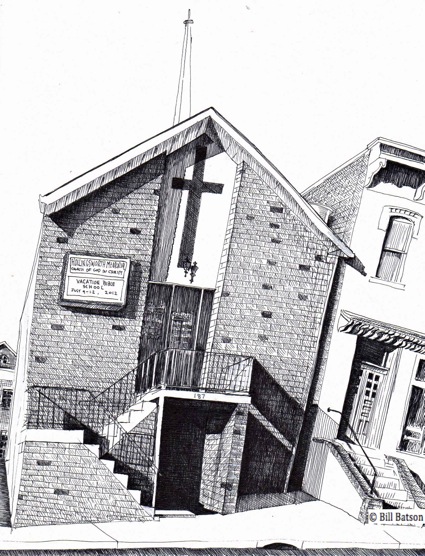 “This church is a miracle.”  That is how the wife of the pastor of Hollingsworth Memorial, Evangelist Myrtle Jones, has described this brick and steel structure.  The evidence to support her comment is extensive.  From 1990 until 1995 the spiritual home of this congregation was condemned, demolished, rebuilt, demolished,  and finally rededicated. In a community with many storied houses of worship, the journey that this flock endured through the wilderness of real estate limbo might make you say: Amen.

The man who led this congregation through a harrowing interval of uncertainty to the stability of a new sanctuary, Superintendent Eugene Jones Sr., will celebrate his 29th year in the pulpit on Sunday, August 12th.

The story of this church is a study in tenacity and perseverance that must make every anniversary and milestone they observe all the more poignant.

The Church Of God in Christ denomination came to Nyack in the 1930s through the determination of Pastors Hawkins and Parsons.  Early services were held in the homes of members and eventually in a storefront at 104 Depew Avenue.

In 1941, Elder Walter Hollingsworth was installed as pastor and began to raise the funds to purchase a proper place of prayer.  In 1964, after years of thrift and a profitable barbecue pit, the congregation purchased a church at 187 Main Street from the parishioners of Pilgrim Baptist who were moving to High Avenue.  The new church would soon be named Hollingsworth Temple.

According to village records, the property had been converted by the officers of Pilgrim Baptist Church from a carpentry shop and stable into a church in 1903.  When Elder Jones was installed as the fifth pastor of the parish in 1983, renovations to the one hundred year old building that he was inheriting were certainly high on his agenda. But he could not have imagined that the walls of the temple were soon to come tumbling down.

Seven years after assuming leadership, Rev. Jones was pictured in a Journal News article standing next to a roofless church. Major renovations would not remedy the structural flaws found by building inspectors.  The reverend had become a construction manager, overseeing the demolition and reconstruction of his church.  In the same article, Jones expressed appreciation to the First Presbyterian Church, now Nyack Center, for hosting his members during construction, which he expected to take six months.

The congregation was without a church for close to six years.  Two years into their wanderings, a contractor reported to Rev. Jones that the four walls and foundation of the new temple had been completed but had inadvertently encroached over their neighbors’ property line.  This three foot error would cost Hollingsworth two years in court and almost $100,000 in legal and construction expenses.

Thus began an agonizing period of homelessness that would have taxed the proverbial patience of Job.  When the media reported that the real estate investor who demanded that the church demolish their errantly constructed foundation was also the owner of a property that included an all-nude bar, Rev. Jones wondered whether a Satanic force “was trying to keep us from building on this hill.”

Because of the support of many including, Pilgrim Baptist Church, Simpson Memorial (now the Living Christ Church), St. John’s Deliverance Tabernacle, Rockland Minister’s Alliance, the Church of God in Christ regional headquarters in Brooklyn, the administration of Nyack Mayor Terry Hekker and countless individuals and families, a dedication ceremony for a new brick church was held in June, 1995. Harold Owens’ design for this building makes it seem like its clinging to the curve of the hill, refusing to surrender its hard-won foothold.  The modern metal steeple that pierces the sky above Main Street announces, as it reflects the morning light, that in the battle for Hollingsworth Memorial,  good has prevailed.

The anniversary celebration next Sunday honors a tenure that almost equals the 30 years of service that Rev. Walter Hollingsworth gave to the church that would bear his name.  In 2008, North Mill Street from Main to Burd was designated to be known each August as Superintendent Eugene Jones Sr. Boulevard. The renaming of part of our community for this member of the clergy is only fitting because the numerous churches that grace our village shape more than just our landscape.  We all benefit from the spirit of interdenominational fellowship and community cooperation that was exemplified in the struggle that secured this church on this hill.

Special thanks to Carol Weiss, Historian of the Village of Nyack and Nyack Village Clerk and Hollingsworth Memorial member Mary White for their assistance in gathering research materials.