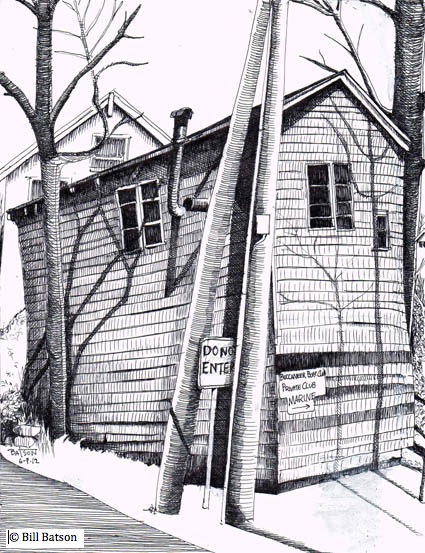 Those that pass this sagging garage at the corner of Ackerman Place and Gedney Street and follow the arrow pointing North are privy to one of the best kept secrets in Nyack.  Once known as the Buccaneer Boat Club, the members of the Hook Mountain Yacht Club are the custodians of hidden treasure.  If you are invited to navigate a short gravel drive way and round the corner of the Rivercrest Cooperatives you will mount a 300 foot dock that leads to something more valuable than the gold that Captain Kidd was rumored to have hidden in the Palisades: an unobstructed view of Hook Mountain framed only by river and sky.

The property that would become the Hook Mountain Yacht Club was purchased in 1946 by James Kizer and operated for several decades as a marina.  Originally Kizer provided slips for 10 small boats.  In 1958, he obtained a riparian grant from New York State that extended his property 500 feet into the Hudson.

Kizer may have owned the marina, but as a full time employee of Lederle Labs, a spirit of cooperation was necessary to run the operation.   His customers were able to keep slip fees low by pitching in with the heavy lifting that is required to run a marina.  His low rates kept some of the last commercial fishermen on the Hudson around for a few more runs of shad before the pollution from factories and human waste destroyed their industry and our food supply.

Materials for the dock were often salvaged. An early club member, Morey Brush, the electrical foreman when the Tappan Zee Bridge was constructed, provided surplus switches and fixtures. 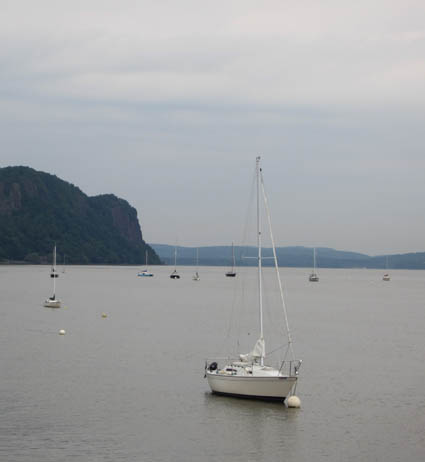 The biggest example of river reincarnation is the barge that houses their clubhouse.  Built to ferry stone from Haverstraw to New York City in 1917,  the flat-bottomed work boat was acquired by Kizer from the Trap Rock Company and floated into position in the 1950s.

After a fall at Lederle in the late 1960’s, Kizer could no longer manage the marina and sold it a group of his customers. Chuck Blumeling, a signatory to that original deed agreement, is still an active member.  Because Kizer’s customers had helped to open the facility in the Spring and close it for the Winter “we knew what had to be done,” Blumeling recalled.

That practice of sweat equity has endured. A majority of the work to maintain the club is accomplished through the skill and labor of the members.  Ed Westman, a former Commodore of the club, told me that people whose boats aren’t even in the water will show up to do work.  “To me, doing the work is as much fun as anything else,” Westman proclaimed.

This “all hands on deck” philosophy is necessary for the collective management of an enterprise that is so vulnerable to the whims of nature.  The cost of membership might be low but the price of being so close to the mighty Hudson is high.  The no-name storm of 1991 took seventy-five feet of dock and compromised the structure of the barge. To avoid flooding at high tide, their clubhouse will eventually need to be lifted four or five feet or rebuilt. 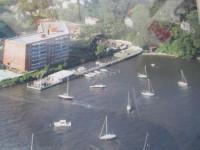 This upcoming weekend Riverkeeper will hold their annual Clearwater’s Great Hudson River Revival.  This is a moment when the notion of a cleaner Hudson seems increasingly possible, Tappan Zee Bridge construction not withstanding.

The generations of pollution that chocked the marine life out of the river for over a century began to abate in 1993.  That is when New York City opened the North River Wastewater Plant and began treating the 350 million gallons of sewage that the city releases daily into the Hudson.

Ironically, the restored health of the river presents a new threat.  According to Blumeling, cleaner water has allowed the Teredo worm to return.  Known as the termite of the sea, the worm is now devouring wooden structures in the river.  “When the river was polluted, we didn’t need to treat the wood,” he explained. 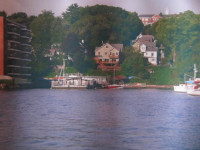 There will be many challenges and opportunities as life returns to the river.  On June 22, Nyack will reopen its public marina.  With a marina, two boat clubs, a River Rowing Association that encourages young people to get out on the water and a large park that faces the river, the Hudson can no longer be a best kept secret, concealed in plain sight.

For some, haze and fog or the tree line and buildings hide the Hudson.  For others, too much attention is spent on the issues related to getting commuters and commerce to the other shore.

It is time we focus on the body of water that has nurtured our village for centuries. Because whether or not we want to admit it: we are a river town.