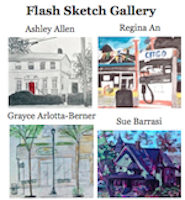 On June 16, 90+ artists came to Nyack to create a composite landscape portrait of the village. The often solitary act of making visual art was transformed into a public performance as part of ART WALK, an annual arts festival.  Professionals and amateurs, adults and children stood 12 paces apart along a half-mile stretch of Broadway to capture every inch of this busy river village thoroughfare.  This experiment in collective craftsmanship created an extraordinary work of collaborative art.  The combined effort of almost 200 hands produced feelings of unity and wonder in their wake.

The work of the Flash Sketch Mob is presented here in a slide show curated by Kris Burns with a sound track provided by Nyack resident and professional composer John Gromada.  There is also an alphabetical index by name and image.

A local multimedia artist, Burns produced Hopper Happens, a public art program that was the featured event of last year’s ART WALK and commemorated the 40th anniversary of the Edward Hopper Arts Center. Her tribute to Hopper, that unfolded over weeks and included readings; flash mobs and projections inspired the Flash Sketch Mob.  The process of converting the work of the Flash Sketch Mob into a captioned and coherent slide show has been herculean.  This project would not have been possible without the vision and talent of Kris Burns.

The Flash Sketch Mob will now be transformed into a Flash Sketch Map.   The artworks will be combined to create a digital street-view map of Nyack.

The Flash Sketch Gallery contains the work of over 90 artists (and one poet), but none of this would have been possible without the efforts of  44 volunteers who shared their time and unique talents to accomplish this goal.  Without these volunteers and generous support from the Village of Nyack and several not-for-profit organizations and local businesses, this community art event would not have been possible.

Remember the brick/ red/ dusty/ a story that has too many/ words not/ enough time/ this is what/ we/ think we remember/ before pavement/ and bell towers/ cobblestone like sin/ tells time/ poems not spoken/ we are/ the spoken/ the un-written verse of yesterday’s punctuation/ this is untold/ told over again/ again, over/ over/ like erected building/ handmade plaster/ too many semi-colons later/ I sit here/ looking for that 4-leaf clover/ the wish in between the sedimentary/ rock/ and top of sky/ sprouted with tree branches/ this reminds me of/ us/ her/ them/ the un-told story/ a love/ lost/ forgiven and re-found/ there is a love letter below the brick/ stamped/ waiting for/ you/ I/ go ahead/ open your eyes/ tell me/ what it speaks/ re-tell this/ differently

Special thanks to some of the people who helped turn a good idea into a great event.

Bill Batson produced the world’s first “Flash Sketch Mob” in Nyack, NY on June 16, 2012. He is an artist, activist and writer who draws and sketches the Nyack Sketch Log each week on NyackNewsAndViews.