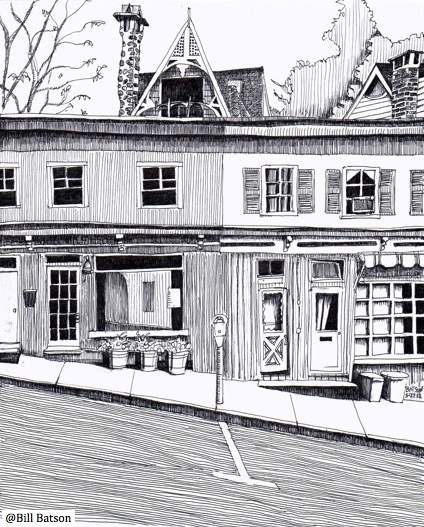 Behind this non-descript row of storefronts is the creative enterprise of artist, hairdresser, health advocate and burgeoning environmentalist Candice Robins. Robins advances a deeper brand of aesthetics that connects your outer appearance to your inner wellbeing.  When some people hear the word salon, they imagine a hairdresser’s workshop, other’s a place for artistic exploration.  Welcome to Candice Robins Streamstudio, where you can find both and much more.

The name Streamstudio was inspired by the deceptively tranquil Nyack Brook, that runs behind her shop.  The body of water that transects the village is normally calm but when swollen, like last Saturday, the steep slope and a narrowing bed creates a torrent. Her proximity to the brook has led Robins to become active in local efforts to protect our regions waterways, and the village from flooding, causes that fit seamlessly into her personal and professional journey.

Candice received her visual arts training in the California Bay Area, during the period when students were founding the free speech movement and occupying the People’s Park in Berkeley.  Candice studied under legendary artists including Viola Frey, Dale Chihuly, and Peter Voulkos. “I have been blessed to work with the top people in my fields,” Robins told me when we spoke recently.

While working as a waitress in Lake Tahoe after college, a good friend gave Candice the speech that all visual artists eventually receive: fine art won’t pay the bills, in order to survive you have to find a trade.   This admonition led Robins to return to the East coast where she found a pursuit that would engage her creativity and a mentor that would elevate her craft.

When Robins arrived in New York in the early 1980’s, she apprenticed with one of Vidal Sassoon’s creative partners David Daines.  For Robins, New York in the 80’s was as artistically vibrant as Paris in the 1920’s: an era where art movements where being invented and the lines between disciplines began to blur.

As a visual artist, Robins could easily navigate between the art world of Soho and the fashion scene on Madison Avenue.   She developed relationships with the leading artists of the era including Andy Warhol, Keith Haring, Jean-Michel Basquiat and Robert Mapplethorpe. 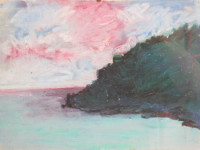 Eventually, Robins became the lead hairdresser for the Elite Models agency.  She was a favorite of New York fashion designers and was back stage at all the major runway shows. Her work would bring her to Paris and Milan.   She established her own hair studio, Avalon on Broadway between Prince and Spring Street.  Her business was successful enough to allow her to commute between New York and Bequia, a seven square mile Island in the Grenadines, where she was started a family.

When her son Elijah was ready to start school, Robins followed a familiar emigration pattern of generations of artists before her and came to Nyack.  Her original intent was to continue seeing clients in New York, but the terrorist attacks of September 2001, made creating a salon in Nyack a logical and comforting alternative.

During her years in New York, Robins was known as the “Hair Healer.” “Your hair is a barometer of your health, “she contends.  While in Lake Tahoe, Robins began studying the herbal ingredients that form the tonics and lotions we apply to our hair and skin.  “Before the advent of chemicals and synthetics, everything that we put on our bodies was made from plant material,” she told me.  Robins, who makes her own products now, is a likely to recommend that you ingest organic products, like virgin coconut oil, as she is to apply something to your hair and scalp.

Candice and Elijah live steps away from the Hudson.  The river plays a major role in both of their lives.  Elijah has continued the seafaring tradition that is a part of his West Indian heritage.  He is an accomplished sailor and a sailing instructor at the Nyack Boat Club.

Robins was inspired by one of her clients, Strawtown Studio founder Laurie Seeman to become a vocal advocate for Nyack Brook and the Hudson River.  “We may live near the river, but we have turned our backs on her,” Robins asserts.  She wants people to imagine the River as a place where people can once again safely swim and fish.

So you may see Candice attending a green infrastructure committee meeting in Village Hall, or advocating alternative health treatments on Facebook.  Or you can visit the Streamstudio for a haircut, organic haircolor or an art exhibition.  But on one day each week you won’t see her unless you have a pair of binoculars.  She’s just joined the crew of a sailboat racing team, and every Sunday Candice can be found riding the wind in the middle of the Tappan’s Sea.

Streamstudio is located at 192 Main Street.  For an appointment or to purchase some of her organic hair products contact Candice at (845) 538-5101, robins.candice@gmail.com or visit her on Facebook.