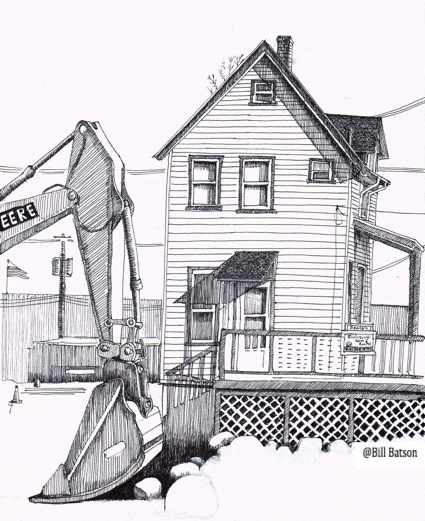 Kathy Christophersen used to have Moger’s Auto Works and the Hilltop Restaurant as neighbors. But those beloved businesses have been sold and torn down.  Her new neighbor on Route 59 and 9W will be Walgreens. For the last six months, Christophersen’s house has been in a maelstrom of protesting union members, an inflatable rat mascot and a circling phalanx of heavy machinery.

I first learned of Christophersen’s plight months ago, when I saw a sign scribbled on a piece of wood attached to a fence next to her house that read ‘€œthe public needs to know.’€  When I approached Christophersen, she told me that she was being bullied by Walgreens and that they had never made an offer to buy her property.  She also wanted to enlist support in having her house designated as an official stop on the Underground Railroad.

There is a foundation for her Underground Railroad theory: her property is across the street from a site where the home of Cynthia and Edward Hesdra once stood.  Cynthia Hesdra was born a slave, secured her emancipation and after a successful career managing real estate properties and several businesses, died a wealthy woman.  A plaque erected by the American Legion documents the Hesdra house connection to the Underground Railroad.

Another Underground Railroad plaque, installed by Provident Bank, was erected to the north of Christophersen’s house. The inscription on the plaque documents that the brook that ran behind her property was commonly used as a navigation tool by escaping slaves.  This marker was dedicated on Martin Luther King’s birthday in 2010 at an event presided over by Provident Bank Director Dennis L. Coyle.

When I went to photograph the plaque for this column, it was gone.  The marker had been displaced by Walgreen’s construction. Joseph Mitlof, founder of Nyack’s Historic Underground Railroad Society, has been assured by Provident that the plaque will be restored. 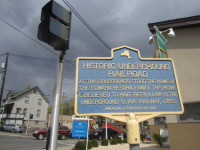 Christophersen’s home is near a plaque commemorating the Historic Underground Railroad.

The clandestine network that transported escaping slaves to Canada required secrecy to protect the lives, freedom and property of participants and was designed from its inception for ‘€œplausible deniability.’€  Christophersen’s claim is plausible, but as a fact it can be easily denied.

Christophersen, a single mother and leukemia survivor, bought the property 22 years ago.  For months she has lived and worked her real estate practice in a home encircled by backhoes and bulldozers, showered by debris, serenaded daily by the sounds of construction.  She fears the constant vibrations are taking a toll on her home’s foundation and her well being. 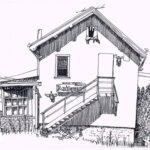 An antique shop was one of Christophersen’s neighbors prior to its demolition. 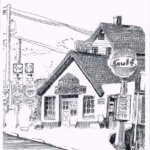 When approached for comment on Christophersen’s claim that no offer was made to buy her property, Walgreen’s spokesperson Robert Elfinger says his company did make an offer to Christophersen ‘€œin the past.’€  When told of Walgreen’s response Christophersen told me, ‘€œThat’s a lie, they never made me an offer, where is it?  I would like to see it.’€

Claims and counterclaims are the slings and arrows of land disputes.   This once iconic crossroads is now the stage for an unfolding drama and the players are a homeowner and a corporation.  We can’t know the moral until we know the ending, but I do know a Greek or Shakespearean tragedy when I see one.