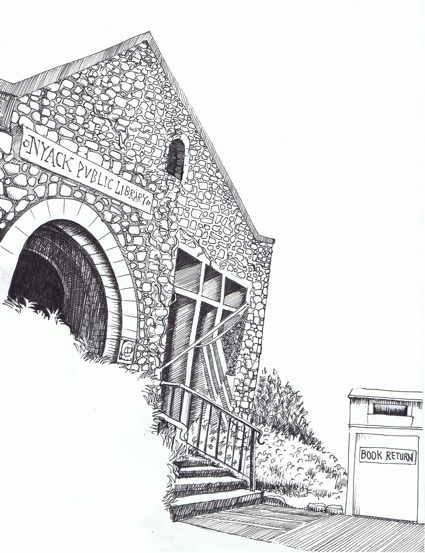 More than 200 years ago, Nicholas Green and Tunis Depew sowed the seeds that would become the Nyack Library.  A membership fee of $90 a year was required to join the first edition of our community’s book depository.  Their institution  was undoubtedly modeled on Benjamin Franklin’s Library Company of Philadelphia, considered to be the first lending library in North America.  The story of the evolution of public book lending in Nyack captures the powerful civic and egalitarian impulses that have compelled people spanning the ideological spectrum and generations to support The Nyack Library.

Rev. Stephen Merritt Jr. established the next incarnation of a library in Nyack in 1872 as part of the Young Men’s Christian Association during a period when the village was emerging as a regional capitol.  Factories, steamboats and the Nyack Turnpike helped grow the village to 3,500 people. The swelling population brought new problems:  Nyack’s streets were crowded with “tobacco-chewing, street loafers” according to a letter to the editor in the Rockland County Journal.

The newly incorporated village administration must have been pleased to see a private effort to promote literacy and self-improvement.   As a Methodist minister, Merritt imbued the YMCA with the tenets of the Temperance Movement. In 1873, the collection included 200 volumes that advocated abstinence from alcohol.

Nyack’s YMCA, two banks and many businesses may have succumbed to the economic depression of 1878, but Merritt’s collection of books endured. 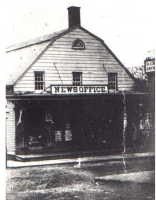 The existing collection was subsequently reorganized into the nucleus of a resurgent public library. By-laws were adopted and the Nyack Library was reborn in January 1879.

Local stationer and news dealer John Haeselbarth served as librarian and his store on Main Street and Broadway became the reading room. On September 10, 1890, the trustees took steps to create a proper library setting, where readers did not have to compete with shoppers for the librarian’s attention.  Rooms were rented on the DePew Ave for $275 per year and Emma Thornburn, who previously served as the YMCA’s librarian, was returned to her post.

There was still one big transformation ahead for our library: the journey from fee to free.  According to the founding documents ‘€œany person might become a member..by payment of $1.” An additional dollar would have to be paid annually for the right to borrow books. The library became truly public in February 1893 when a resolution was adopted to drop the yearly charges.

The free circulation policy was influenced by political and philanthropic forces.  On the political front, a law passed by the New York State legislature in 1892 authorized tax-collecting bodies to establish “forever free” public libraries that would qualify for additional public funding.

On a parallel track, the business leaders that made up the Board of Trustees practiced their own enlightened self-interest.  The industrial revolution required a sober and manageable work force, an ethos that the burgeoning national public library movement encouraged.

In Nyack, the legacy of the temperance movement was compatible with the goals of corporate philanthropy.  The continuing inspiration of Rev. Merritt was evident when Daniel Defoe’s Robinson Crusoe was blacklisted from the stacks in 1893 because of the protagonist’s fondness for rum.

Thanks to a thesis written by Ruth Diebold, Nyack Library Director from 1964- 1970, we know some of the popular titles that made it into circulation in the 1890’s.

As the 19th century drew to a close, the time was now ripe to build a permanent space for Nyack’s Library.  The building on South Broadway that is now central to the village’s landscape and psyche was built during an era of great civic public works projects including a new water system (1896) and public hospital (1900).  In 1903, with a significant philanthropic gift from Andrew Carnegie, the richest man in the world, a corner stone was laid for the library the citizens of Nyack had sought since 1806.

The Nyack Sketch Log would not be possible without materials provided by The Nyack Library’s Periodical Project,  a community effort to scan and save old issues of the Rockland County Journal from the “Edward Hopper Years” in the late 1800s and early 1900s. I urge you to consider supporting this important project to save and share our history for online access through the library’s Kickstarter fundraising effort. — Bill Batson, Nyack