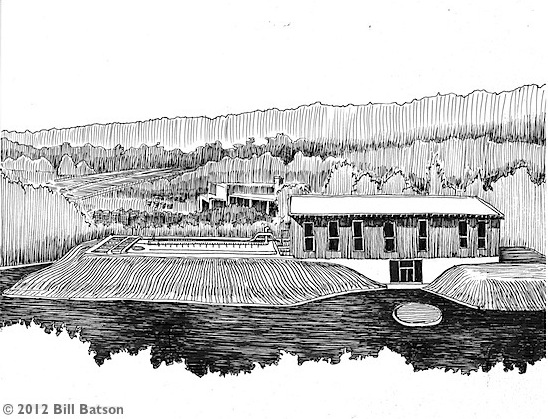 When we turn on the faucet or flush the toilet, the water always flows. We may not know the exact source, or where the mains and pipes are buried, but we can reliably depend on the quality and availability of water in our village.  Nyack is fortunate to have a publicly controlled water department that has met our needs for 116 years.

From 18th century cisterns to the controversy over fluoridation, from political intrigue in the Leonard Cooke era to the desalination proposal of United Water, here is brief history of the water supply in Nyack.

The Source of our Water

Our water is drawn from the Hackensack River after it passes through Lake Deforest Reservoir.  The reservoir has a capacity of five billion gallons.  The water filtration plant that treats our water is operated by the Nyack Water Department and is located approximately one mile from the reservior in West Nyack.

We use approximately 1.5 million gallons of water per day.  This number rises in the summer and drops in the winter.

The treatment plant cost one million dollars to construct when it was built in 1970. 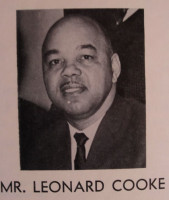 Leonard Cooke, an African American civic leader, was the chairman of the Nyack Water Department when the treatment plant was constructed. Cooke was widely recognized for securing a grant of over a half a million dollars from the US Dept of Housing and Urban Development that made the project possible.  The deal was negotiated between Cooke and HUD Secretary Robert Weaver, the first African American cabinet member.  Cooke and Weaver first met through their work with the NAACP.

Although the plant was named for Cooke when it opened in 1970, the Nyack Village Board removed his name from the building and refused to reappoint Cooke, a long time Democratic Committeeman, when a newly elected Republican majority assumed control of the Village Board in 1973.

In a subsequent electoral cycle, Cooke was returned to his position and his name restored to the filtration plant.

From Private to Public to Almost Private Again

The Honorable William Voorhis chartered the Nyack Water Works Company on March 28, 1873.  At first, the company provided water from springs and wells.  As demand grew the water company added capacity with three reservoirs. Eventually, population growth required the construction of a steam powered pump house to take water from the Hackensack River near the location of today’s treatment plant.

Before Voorhis, water was obtained through wells that were sometimes shared with neighbors or cisterns that collected rainwater.  Many health and conservation conscious people today are promoting a return to the cistern.

In the early 1960’s, the Nyack Civic Association, with Leonard Cooke at the vanguard, successfully fought off efforts to sell Nyack’s water supply to the Spring Valley Water and Supply Company.  Opponents argued that the sale would drive up rates.  Spring Valley Water was eventually taken over by United Water.

In 1980, Nyack failed to comply with a Rockland County Health Department mandate to fluoridate the water supply.  Ignoring pleas from then Mayor Alex Caglione, the Village Board refused to approve fluoridation. Legal maneuvering ensued, but the Village Board eventually prevailed.

In Stanly Kubrick’s epic work of political satire, Dr. Strangelove, a deranged General Jack D. Ripper, suggests fluoridation was a communist plot.  I am not sure that Kubrick and Ripper are to blame for our fluoride free water, but the wound of the battle is still evident.  In a Q & A on the Rockland County Department of Health the question, ‘€œis my water fluoridated,’€ is answered: NO!

The safety of our water supply is once again in the headlines as sides are drawn over United Water’s plan to open a desalination plant on the Hudson River in Haverstraw.

According to the Nyack Water Department, Nyack residents would not consume desalinated water if the plan were adopted because our water supply is separate from the United Water system.  However, during emergencies, we do rely on United Water’s reservoir.

The Rockland Water Coalition argues that the adverse health effects from exposure to desalinated water are not the only issue for the people of Nyack.  The generation of unlimited river water through desalination would spur over development jeopardizing our water supply through increased pollution and run off.

There is also concern about the environmental impact of a deslination plant.  There is concern over how the removal of millions of gallons of water per day for desalination will impact the Hudson River.  Haverstraw Bay is a major nursery for many species, some of which are endangered.   Finally, the large amounts of electricity required to power the plant will pollute the air and warm the globe.

A public hearing on the United Water desalination proposal is being held on March 6 at 2p and 6p at Haverstraw Town Hall, One Rosman Road in Garnerville. You can submit written comments by April 20 to the Department of Environmental Conservation.

Thanks to Brian Jennings, the Librarian Supervisor at the Nyack Library for his time, energy and insight.  Special thanks to Win Perry and Harry Williams, Nyack Water Department Superintendent.