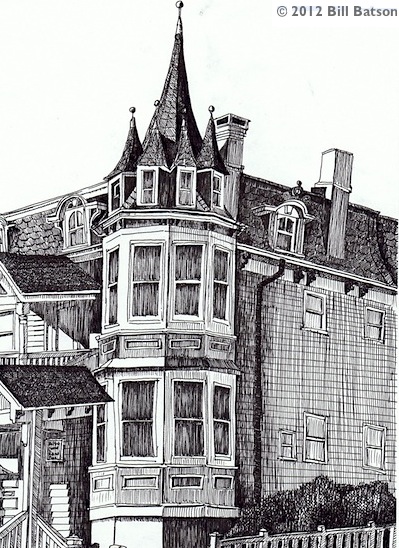 Not every beautiful old house in Nyack merits its own historic marker.  For other properties, the traditional historic marker is not a loud enough shout out.  Clearly, there are many addresses that could compete for the title of most interesting building in the village.  In lieu of the debate over criteria, and before a jury can be impaneled, I suggest the former offices of a feminist pioneer, known as Couch Court, for future consideration.

When I made my first sketch of this three-story Victorian stunner, I didn’t know about its rich history. Fortunately, the Historical Society of Rockland County had erected a marker.  It reads like a time line with entire eras reduced to a simple sentence. Each epoch struck me as being more captivating then the preceding one.

‘€œBuilt in 1854 for A.J. Storms of Storms Tub and Pail Factory,’€ the metal marquee begins. Mr. Storms had this house built at this location so that he could keep a watchful eye over his factory that stood on the ground that is today Memorial Park. In the mid-19th century South Broadway was a mixed-use neighborhood, where manufacturing and agricultural properties stood side-by-side with houses.  As property values rose, factories moved further in-land to make room for residential development.

The next factoid etched in rusting relief tells us that ‘€œfrom 1875 until 1882, [this building was] the home of Edwin Stillwell, Captain of the Nyack-Tarrytown Ferry.’€ The views from the third story most have provided a panoramic vista of the Hudson, well suited for a ship’s captain residence.

The next two sentences on the permanent placard inform us that the building was ‘€œpurchased in 1885 by the Couch Family.  Dr. Louis Couch used the tower for his Homeopathic practice.’€  I thought that homeopathic remedies were a ‘€œnew age’€ innovation of the 1960’s. Apparently, homeopathy, which is a form of alternative medicine that treats patients with highly diluted preparations, found it greatest popular acceptance in the 19th century.

As compelling as the image of men and women in period dress in a homeopaths waiting room under a pyramid shaped roof may be, the medical practice is not the Couch family’s greatest legacy.   That distinction goes to the doctor’s daughter, Natalie, who according to the signpost was ‘€œa law clerk for Arthur S. Tompkins, [and] became the County’s 1st woman attorney.’€ 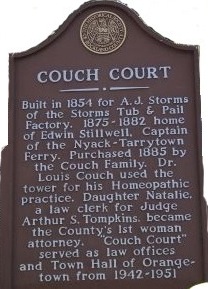 Natalie Couch graduated from Wellesley College in 1907 and was first in her class at Fordham Law School.   When the issue of extending the right to vote to women first appeared on the ballot in Rockland County in 1915, the measure lost by 400 votes.  The initiative passed two years later and in 1918; Miss Natalie Couch became the first woman to cast a legal vote in our county.  It was just the beginning of an impressive resume of firsts:

Natalie Couch was the first woman to:

From 1942 to 1951, her law offices became temporary meeting place for the New York State Supreme Court and Town Hall for Orangetown, hence the moniker, Couch Court.  Natalie Couch came into a world where she was legally precluded from participating in government and departed life with an obituary in the New York Times that described her as New York State Republican leader.

We might not be able to agree on which building in Nyack is most intriguing, but a full account of the life of Natalie Couch raises some legitimate questions: where is her statue, the street named in her honor or the annual event in her name that would inspire young women to study law and enter public life?

We need to find a way to amplify the stories told on the historical markers that sit passively in front of 42 other locations in Rockland County.   Shouldn’t every young girl who walks past this building be given the boost in confidence that Natalie Couch’s story would instill?  As impressive as an octagonal tower with a mansard roof shaped like five witch’s hats appears, the story of the first woman to vote in Rockland County strikes a far more significant silhouette.

Special thanks to John Patrick Shutz. In addition to his work as an actor, writer and historian, JP happens to have an office in Couch Court as a realtor with Better Homes and Gardens Rand Realty. If it wasn’t for JP’s blog ‘€œAt Home In Nyack’€ I would not have appreciated the fullness of Natalie Couch’s accomplishments.

Thanks as well to Brian Jennings, the Librarian Supervisor at the Nyack Library.

The Nyack Sketch Log is sponsored by The Frame Shop at 40 South Franklin Street in Nyack, NY.